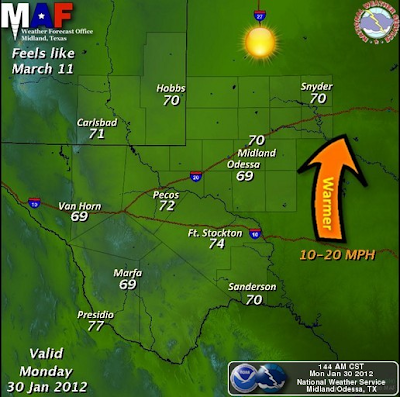 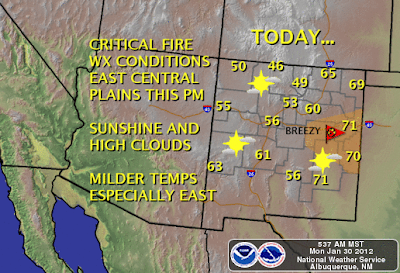 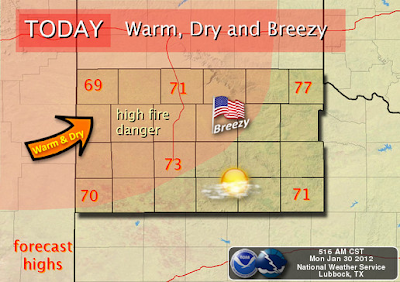 Blog updated at 1:35 PM MST today.
Sunny skies and balmy temperatures will rule our local weather today into Wednesday. Our afternoon highs will reach the 70-degree mark across most locations this afternoon, with a few spots a couple of degrees warmer. The same will be true for Tuesday's weather with highs in the low-mid 70's, perhaps a few upper 70's.
A fast moving mid-level disturbance will zip overhead Tuesday, and this will kick up the westerly winds especially over the Guadalupe Mountains. Other than this, the only other impact it will have on our local weather is too knock our afternoon high temps down a few degrees on Wednesday, with the mid-upper 60's forecast across the local area.
Storm Or No Storm? 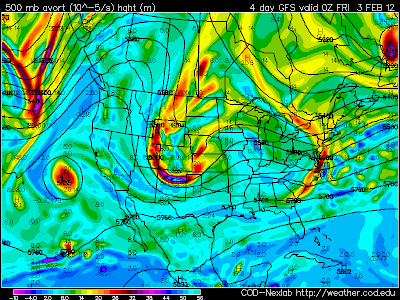 GFS 500 MB Forecast At 5 PM Thu Feb 2, 2012.
Last nights 00Z/5 PM MST forecast run of the GFS model (depicted above), drops the next short wave trough of low pressure into northern New Mexico and southern Colorado by Thursday. It then closes the storm off (forms a closed mid-upper level low) over Colorado, and slowly wobbles it eastward into Kansas into Saturday. 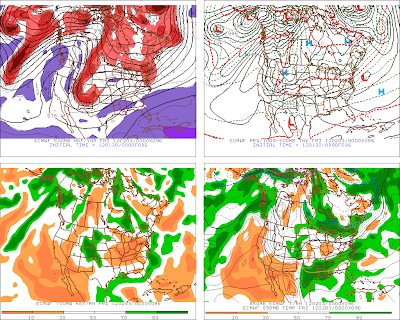 ECMWF Forecast At 5 PM MST Thu Feb 2, 2012.
Last nights 00Z/5 PM MST forecast run of the European (ECMWF) model (depicted above) follows a similar track as the GFS model, at least initially. It too drops the the short wave trough of low pressure into northwestern New Mexico on Thursday. But unlike the GFS model, it closes the storm off over northern New Mexico and southern Colorado and stalls it there through Saturday. It then forecasts a split in the storm on Sunday, with a piece of the energy heading into Kansas, and a second piece relocating over northern Arizona. It then stretches the storm out over New Mexico and northeastward into Kansas into next Monday. 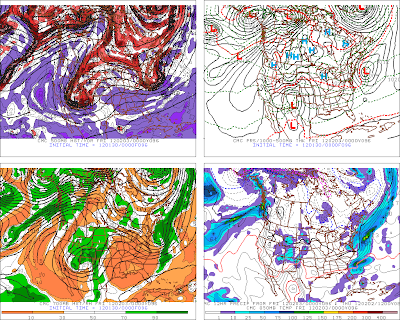 CMC Forecast At 5 PM MST Thu Feb 2, 2012.
Last nights 00Z/5 PM MST forecast run of the Canadian (CMC) model is similar to the ECMWF, in that it develops a strong closed low over the Four-Corners Region by Thursday. It then wobbles this storm over New Mexico into the weekend and then shears it apart as we head into next Monday.
I think that it would be fair to say that the models have been behaving badly of late concerning our next potential winter storm at the end of this week. They literally have been all over the place with their forecasts concerning this next storm over the past several days. Without a doubt they are struggling to resolve this one.
I think that the state will see a winter storm, but at this point and time that's about all I am certain about. Who gets what and when are questions that are simply not easy to answer this morning. It does appear that colder weather will be returning to SE NM by the end of the week. More on this later.
Alaska Low Temperatures This Weekend.
Charts Are Courtesy Of The Anchorage, AK NWS Office.
More info on the bitter cold gripping Alaska can be found here.
Near Record Shattering Cold In Alaska.

At 9:35 AM AST this past Saturday morning (Jan 28, 2012), the Department of Transportation's weather station located at Jim River, Alaska, which is near Prospect Creek, Alaska, recorded a temperature of -79F. Mysteriously the station quit reporting data for awhile after that.

Sources for this data is found here-

The record came during an unusually cold month in Alaska, notes the Weather and Climate Extremesbooklet published by the U.S. Army Corps of Engineers. Fairbanks, Alaska, recorded its coldest January on record with a mean temperature of -31.7°F. (The monthly mean is the average of all of the daily highs and lows for the month.)F.
This is not the North American low record. The North American low of -81.4°F. was recorded at Snag in Canada's Yukon Territory, on Feb. 3, 1947."
The Truth Is Stranger Than Fiction!
My Web Page Is Best Viewed With Google Chrome.
Email Post