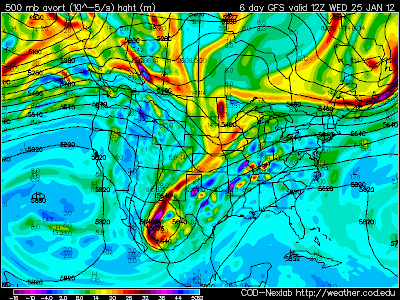 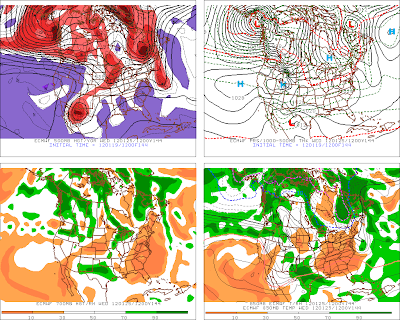 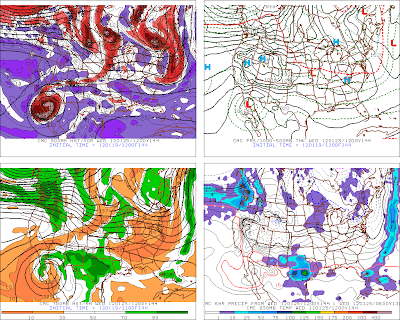 This Mornings 12Z/5 AM MST CMC Forecast.
Valid At 5 AM MST Wed Jan 25, 2012.
It Is Still The Middle Of January Right?
Just for fun I thought that I would post this. At 2 PM MST, the Roswell, NM Airport ASOS is reporting a temperature of 80F. Not to be outdone the Paduca Raws near the WIPP Site is also reporting 80F. Meanwhile I have 79F on my Davis Vantage Pro2 Home Weather Station in my back yard. The Carlsbad Airport has reached 78F so far today, the Artesia Airport 75F, and the Hobbs Airport 73F.
Anyone up for yet another snowstorm across eastern and southeastern New Mexico by around the middle of next week? Well if you believe this mornings 12Z runs of the GFS, European (ECMWF), and the Canadian (CMC) computer forecast models, then this may be a reality for us.
All three of these models are forecasting a strong disturbance to dive southeastward out of the Pacific Northwest and into the Desert Southwest by the first of next week. They then push it south into northern Mexico and develop a strong cutoff mid-upper level low.
The GFS is the furthest east with its forecast and closes off a strong mid-upper level low over southwestern New Mexico on Tuesday. It then cuts this low off from the northern jet stream flow to the north, and parks it well south of us over northern Mexico into Friday, before ejecting it eastward into the Texas Big Bend Country by Saturday.
The Canadian model (CMC) is very similar but stronger and further to the west with the closed low. It drops a strong cutoff mid-upper level low into the Baja Region by Tuesday night into Wednesday, and then retrogrades it westward out over the Pacific into the weekend of the 28th and 29th.
The European (ECMWF) model is similar to the Canadian model and cuts off a strong mid-upper level low over the Baja Region by next Thursday, but ejects it eastward across northern Mexico to our south by Saturday the 28th.
All of the models indicate that enough cold air may be present to produce a healthy snowstorm across parts of the local area by around next Tuesday and Wednesday. Maybe even beyond if the models slow down the timing on the ejection eastward of the storm.
I know that this potential Significant Winter Storm is nearly a week away, and the models have not performed all that well so far this winter, but this is almost the same identical pattern we saw for December, and the first part of this month.
Granted the forecast model runs will likely change their tune between now and the first of next week on what, if any impacts this next potential Winter Storm may, or may not have on SE NM and surrounding areas. But you have got to admit that this winter here in SE NM has been a wild one to say the least.
Folks it ain't over until the fat lady sings, and she has about another two months left on center stage. It seems like old man winter, and mother nature have teamed up this winter to make up for the horrendously hot, and dry (winter of 2010-spring-summer-fall of 2011) we just came out of. Works for me...can't wait to see what the spring has in store for us!!! Maybe we will be able to get in some serious storm chasing across E/SE NM & W TX.
The Truth Is Stranger Than Fiction!
My Web Page Is Best Viewed With Google Chrome.
at Thursday, January 19, 2012