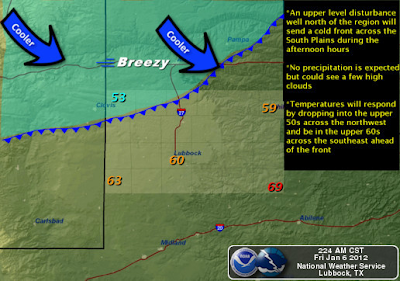 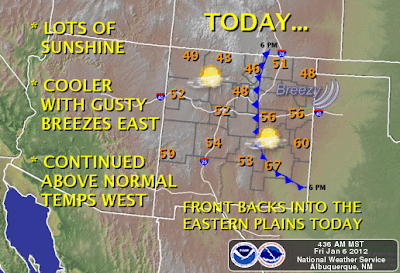 Today will be a little warmer than yesterday with our afternoon highs expected to be mostly in the mid 60's, to near 70 across the southeastern plains of New Mexico. A weak cold front will move south through the local area by tonight...bringing slightly cooler temps for the weekend. Our high temperatures on Saturday and Sunday should range from about 55 - 60 degrees. A few spots may be a couple of degrees warmer. Sunny skies will prevail today into Sunday. 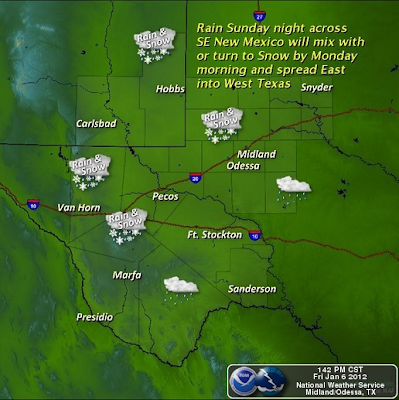 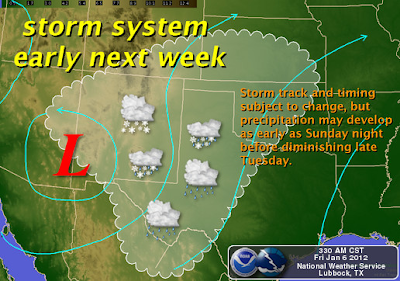 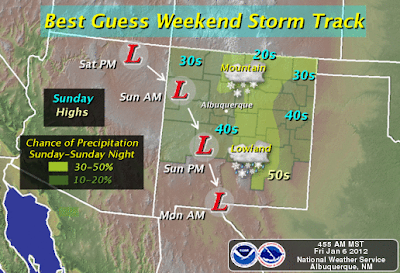 We have been out of sync with most of the rest of the nation so far this winter. Six winter storms in about six weeks have hammered New Mexico. So far this winter I have measured 16.6" of snowfall here at my home in Carlsbad, New Mexico. That's just about double our seasonal average for the winter. Many parts of the nation are wondering whether or not winter will even arrive this year. It will, and with a vengeance in some area from about next week into at least the first week of February.

A Tale Of Four Models. 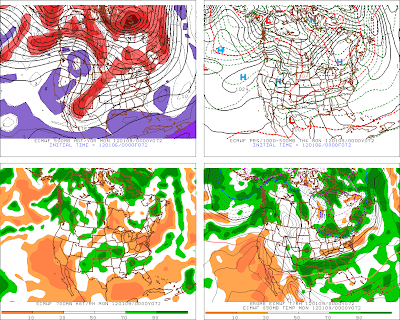 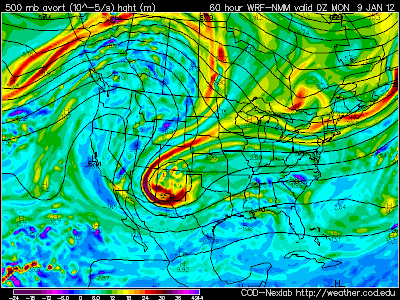 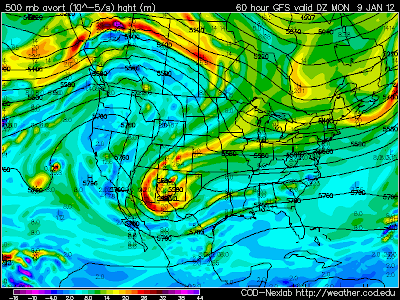 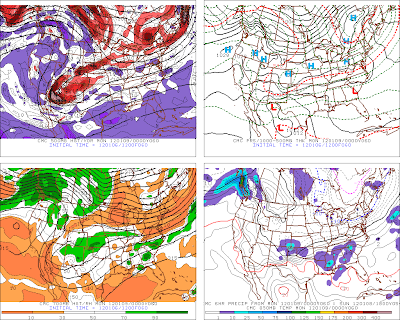 Posted above, are four different computer model forecasts for our next inbound Winter Storm that is due to affect New Mexico, and the local area from Sunday night into Tuesday. Its normal for the computer forecast models to disagree with each others forecast solutions. Some winters are worse than others...and this winter has been terrible at times, concerning the flip flopping and the inconsistency of the models. This is due in a large part to the split flow pattern in the jet stream.

The top map (above) is last nights European run, and it decided to open up the closed low that it had been forecasting for the past several days, and move it a little further to the east by sunset Sunday. This doesn't make much sense this morning, given the fact that for nearly a week, it has insisted on dropping a strong cold closed upper-level low into SE AZ by sunset Sunday.

The middle map (above) is this mornings run of the NAM-WRF model forecast valid for Sunday at sunset. It depicts a broad closed upper-level low centered over south-central New Mexico by Sunday at sunset.

The third map (above) is this mornings run of the GFS model forecast valid for Sunday at sunset. It is very similar with the NAM-WRF model, but appears to be a little stronger, and a tad further to the south with the center of the closed upper-level low.

Finally the fourth map (above) is this mornings run of the Canadian (CMC) model forecast valid at sunset Sunday. It is forecasting a digging open trough of low pressure, that stretches southwest to northeast across southern Arizona and western New Mexico by sunset Sunday.

The trend so far this winter has been for the models to bring these winter storms too far to the east, too fast, and too weak. I think that this may be the case once again. The Canadian model may be on the right track with this next winter storms forecast of digging it further to the west, slowing its eastward progression down, and developing a colder, stronger and wetter storm than the ECMWF, NAM-WRF, or GFS models are forecasting.

If the Canadian model is to be believed, then there is the potential for this next inbound Winter Storm to slide just to the south of us, and not move into West Texas until around mid-day on Tuesday. It also forecasts the potential for 3" - 6" of snowfall across the lower elevations of the area.

As of this mornings local National Weather Service forecasts (click on the links at the top of this web page), we have a chance for a mixed bag of wintry precipitation across the southeastern plains of New Mexico and nearby areas. This could start as early as Sunday night and possibly last into Tuesday morning. Current forecasts indicate that we will see high temps in the upper 30's across the local area Monday.

Should the upper-level storm dig further to the west, slow down in its eastward ejection across the area, and be colder and stronger much as the Canadian model is forecasting, then our chances for accumulating snowfall would increase. Should the upper-level storm drop further to the east into New Mexico, and be a weaker, warmer, and drier storm than what is being forecast by the Canadian model, then we would have less of a chance for rain and or snowfall across the southeastern plains. 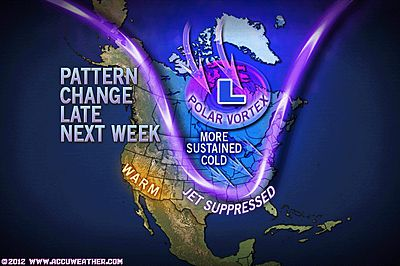 A change in the jet stream pattern that has dominated this winters weather thus far appears to be in the making. This is due to several factors including " sudden stratospheric warming (SSW)" in the very upper-levels of the atmosphere. Generally this occurs between 10 - 50 millibars.

When this occurs, the upper-level winds at this altitude produce a shift the position of the "Polar Vortex", which basically allows for a "Cross Polar Flow" of bitterly cold arctic air southward into the US. There are other factors involved and I don't have time to get into all of this, so please click on the link above, or this link, if you are interested in what is going to possibly cause this change in the nations weather in the coming weeks. For a more detailed explanation click on this link.

The Truth Is Stranger Than Fiction!
on January 06, 2012
Posted by Wendell Malone