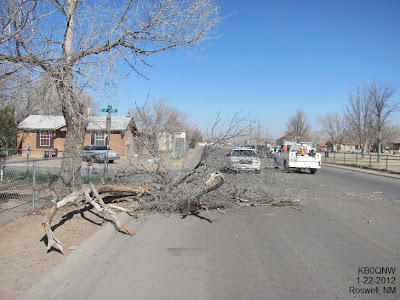 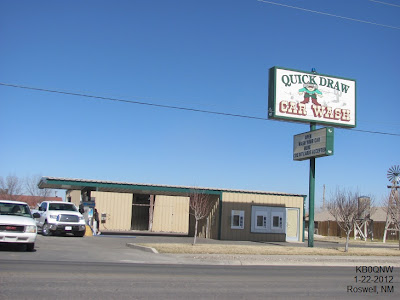 Mescalero & Main Streets In Roswell, NM Sunday.
Photos Are Courtesy Of Chaves Co Skywarn Coordinator
Jim Tucker In Roswell, NM.
Yesterday's Winds.
Several reports of wind damage were received across the local area yesterday. A friend of mine who lives in Artesia, reported that a tree was blown down onto her carport and sons car early Sunday morning. The peak wind gust at the Artesia Airport was 67 mph and occurred at 4:15 AM MST. Small tree branches were also reported to have been blown down across Artesia as well.
Chaves County Skywarn Coordinator Jim Tucker (KB0QNW) shot the two photos above of some of the wind damage in Roswell yesterday. Scattered power outages were reported across Roswell yesterday, with as many as 6,300 people without power for a couple of hours according to the KZ93 Facebook Page.
Some of the higher wind gusts recorded include 93 mph at the San Augustin Raws located in the Organ Mountains east of Las Cruces. A gust to 92 mph was clocked at the Bowl Raws located just north of Guadalupe Peak. Guadalupe Pass, the Pinery Raws located in Pine Springs, and the Sierra Blanca Regional Airport all reported peak wind gusts of 78 mph. The Carlsbad Airport peaked out at 60 mph, while the top gust recorded at the Roswell Airport was 52 mph.
I posted a list of Sunday's peak wind gusts on my blog yesterday, and you can view them by clicking on this link. You can also view the list of peak wind gusts across northern and central New Mexico via this link, courtesy of the Albuquerque National Weather Service Office. A list of some of the wind damage and peak winds reported across the Midland National Weather Service Office County Warning Area can be view via this link.
One Storm Exits - Another On The Way! 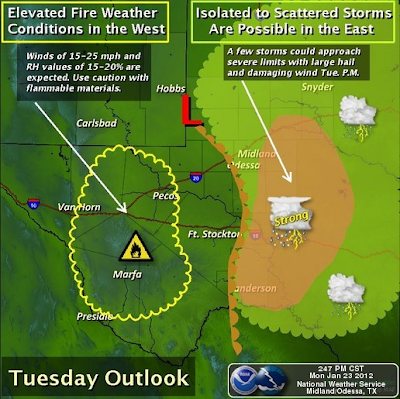 Quote- "An upper level storm system will approach the region Tuesday. Surface low pressure will deepen near the Texas and New Mexico border, while a dryline sharpens from the western Permian Basin to the Lower Trans Pecos region. To the east of the dryline, isolated to scattered thunderstorms may develop Tuesday afternoon and evening. A few storms could approach severe limits with large hail and damaging winds in the eastern Permian Basin and the Lower Trans Pecos. To the west of the dryline, gusty westerly winds and low humidity will bring elevated fire weather conditions to much of southwest Texas." 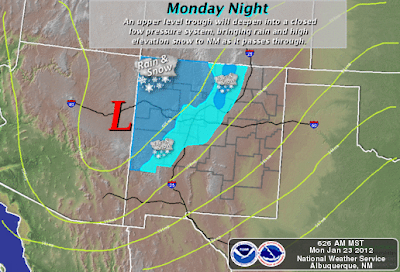 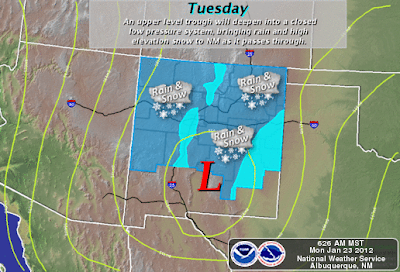 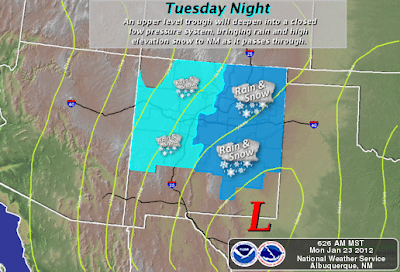 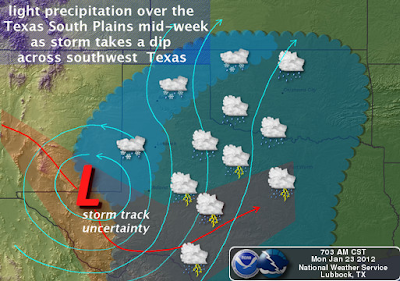 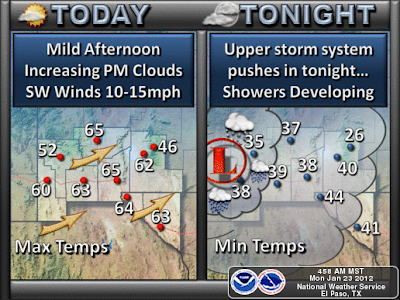 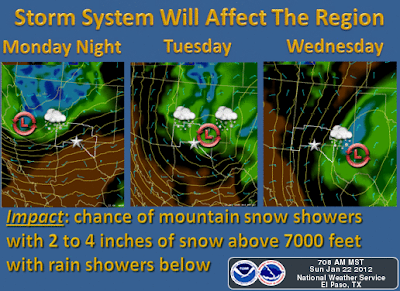 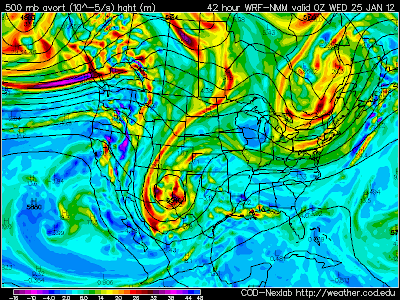 WRF-NMM 500 MB Forecast At 5 PM Tue Jan 24, 2012.
Special Weather Statement From NWS Albuquerque.
A lot of people have been asking me lately if winter is over for SE NM and my answer has been "No it isn't." Winter Storm #7 for the state, or #4 for SE NM, will begin impacting the area Tuesday afternoon. This next storm is currently not expected to be as cold or as moist as its two previous predecessors.
An upper-level disturbance located just off the central California Coast at sunrise this morning is forecast to drop southeastward to the Four-Corners Region by tonight. This disturbance is then forecast to form a closed mid-upper level low over the state on Tuesday. As it sags southeastward Tuesday night into Wednesday morning, current model forecasts place the center of this storm generally over southern or southeastern New Mexico.
Today will be the calm before the storm with mostly sunny skies and balmy afternoon highs with readings mostly in the upper 60's. Clouds will begin to increase on Tuesday as the storm to our northwest draws closer. A few light rain showers will break out over the local area Tuesday afternoon, and these will increase in coverage and intensity Tuesday evening. A few isolated thunderstorms will also be possible.
A Pacific cold front is forecast to move eastward across the area on Tuesday. After seeing afternoon high temperatures from near 60 to the low 60's, colder air will move in overnight into Wednesday morning. Our low temperatures are forecast to drop down to near freezing by late Tuesday night into early Wednesday morning. Wednesday will be cooler with highs in the upper 50's to near 50.
Current thinking is that a rain/snow mix will occur over parts of the southeastern plains late Tuesday night into Wednesday morning. With the current model forecast track of the mid-upper level closed low, it does not appear at this time that the storm will drop far enough to our south, to produce more snow than rain across the lower elevations. However, should the storm dig a little further to the west and south than current forecasts indicate, and the cold air becomes more widespread across the area, then our chances of seeing accumulating snows here in the SE NM plains would increase.
Accumulating snowfall is expected across the Sacramento and Capitan Mountains generally above 7,000' MSL Tuesday into Wednesday. At this time it appears that the mountains may see 2"-4" of new snow out of this storm. Again, if the storm track shifts further to the south and west than currently is expected, then these amounts could be greater than is currently being forecast.
Long-range model forecast have a couple of storms impacting the state next week.
The Truth Is Stranger Than Fiction!
My Web Page Is Best Viewed With Google Chrome.
Email Post