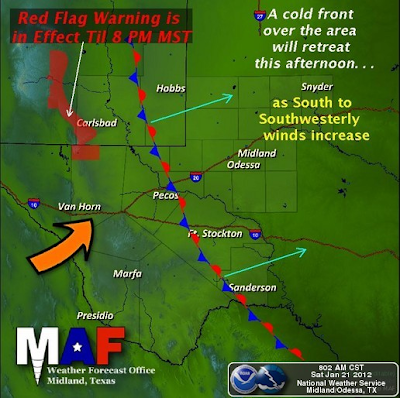 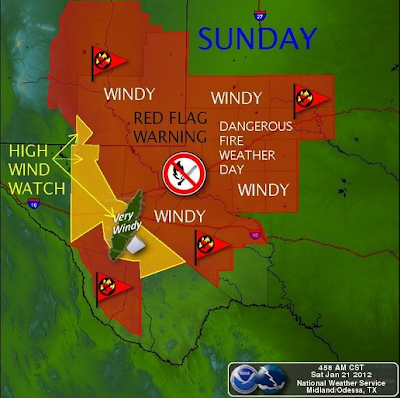 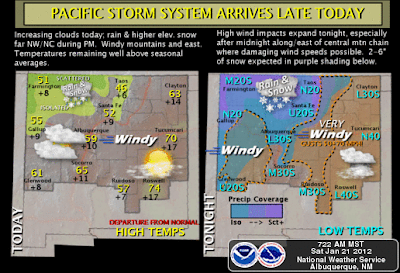 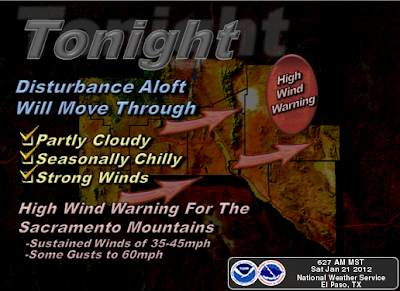 As was expected yesterday was another unusually warm day across SE NM. High temperatures ranged from 81 at the Paduca Raws locted near the WIPP Site, to 79 at my home here in Carlsbad, 79 at the Carlsbad Airport, 79 at the Roswell Airport, 78 at the Artesia Airport, to 75 at the Hobbs Airport. Today will see similar weather, although it will be a tad bit cooler.
High Winds - Blowing Dust Sunday! 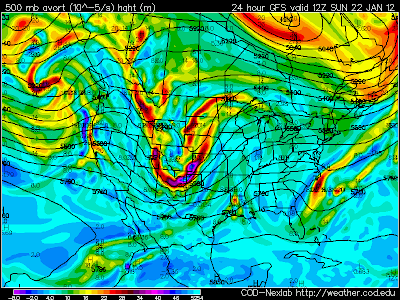 Areas Of Blowing Dust Reducing
The Visibility To Less Than 3 Miles At Times.

As had been previously mentioned, a fast moving short wave trough of low pressure is forecast to swing by to our north across northern New Mexico tomorrow. A High Wind event for the area will result from this as the surface pressure gradient tightens up later tonight into tomorrow.
Strong winds will kick up over the mountains later this afternoon, and then spread out onto the adjacent plains overnight into tomorrow morning. Areas of blowing dust are expected to develop across the area and may reduce the visibility down to less than 3 miles at times in places. This will be especially true over and near farmlands, freshly plowed or open fields, lots and construction sites.

Some areas may experience damage from these high winds, especially over and near the mountains and foothills. This will be especially true with the higher gusts of over 60 mph.

Next Weeks Storm Still On Track. 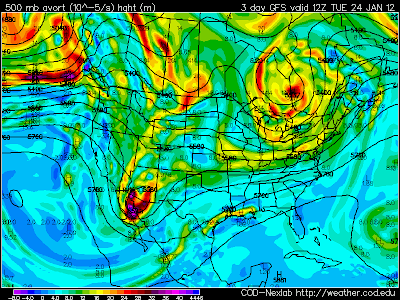 GFS 12Z/5 AM MST 500 MB Forecast.
Valid At 5 AM MST Tue Jan 24, 2012.
This mornings run of the 12Z GFS model is now coming more in line with the European (ECMWF), and the Canadian (CMC) models in tracking the mid-upper level low further to the south with time, and slowing its eastward progress down. The GFS and Canadian models do not eject this cutoff low eastward into the Texas Bend until about next Friday. The ECMWF is a little faster and ejects it eastward by Wednesday night.

Moisture availability, and just how much cold air this storm will have to work with will be crucial in determining who gets snow across the local area and who does not. A rain and snow mix now looks possible Tuesday night into Wednesday morning for parts of SE NM, along with a few thunderstorms.

This is not written in stone just yet, so I would expect to continue to see some changes in our local forecasts concerning this next potential Winter Storm as we head into next week. This storm has the potential to at least produce some decent snowfall totals across the higher elevations of the mountains.
The Truth Is Stranger Than Fiction!
My Web Page Is Best Viewed With Google Chrome.
at Saturday, January 21, 2012