Tranquil Weather Into The Weekend...Storm Next Week.

Blog updated at 3:25 PM MST-
Seasonable Temps Into The Weekend. 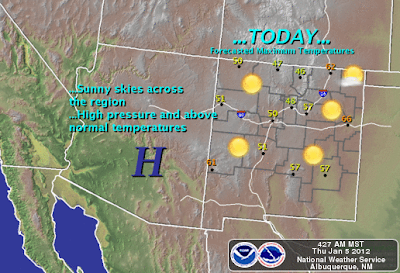 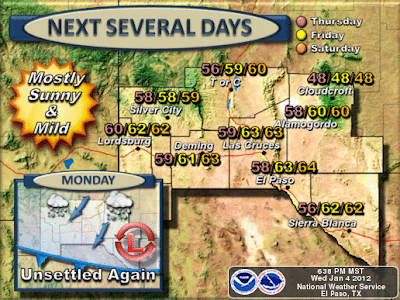 Map Is Courtesy Of The El Paso NWS Office.
Tranquil weather will continue today into the weekend across southeastern New Mexico. We should see our afternoon high temps climb up into the upper 50's to low 60's today. Tomorrow will be a tad warmer with readings in the mid 60's to near 70.
A weak cold front will slip into the area tomorrow evening. This front will knock our daytime highs back down to the upper 50's to low 60' Saturday. Sunday will see a slight rebound with readings in the mid-upper 60's.
Another Winter Storm Taking Aim On The State. 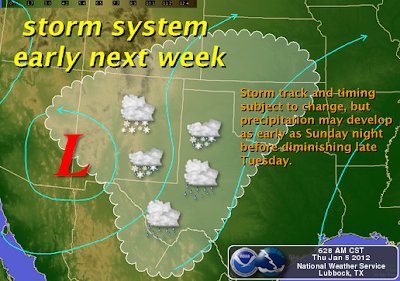 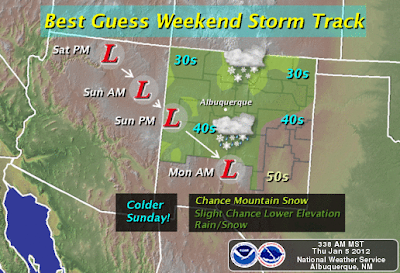 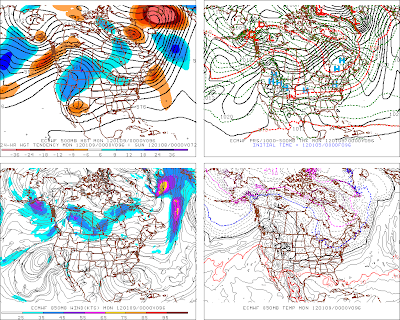 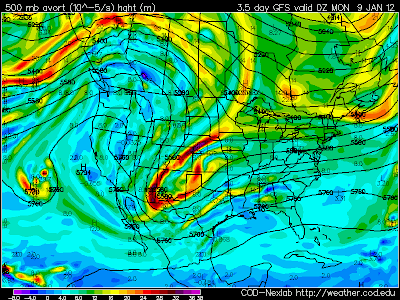 This morning it is looking more and more like yet another winter storm will be taking aim on the state by the end of this upcoming weekend, and continuing into at least next Tuesday. Its a little ironic that many sections of the nation are experiencing a very mild and uneventful winter so far this season, yet New Mexico is in line for the sixth winter storm in about as many weeks.
Once again there are significant differences between the US GFS model and the European (ECMWF) model. So far this winter, the European model (ECMWF- top map above) has out performed the GFS, so it continues to be a more favored model for this storm. It is trending towards a stronger, colder, and slower moving closed upper-level low.
An upper-level disturbance is forecast to drop southward out of the Great Basin and into the Four-Corners Region by Sunday morning. This disturbance is then forecast to continue dropping southward and into southeastern Arizona by early Sunday evening, where it is then forecast to become a closed upper-level low.
Last nights forecast run of the ECMWF model had the closed upper-level low located over West Texas, near the Van Horn area by 5 PM MST Monday. With the current model trends forecasting a deeper, slower, and further west storm with time...this may be a little too far to the east a little too soon. Last nights Canadian model (CMC) was forecasting an even colder storm than the ECMWF.
Forecast temperature soundings across southeastern New Mexico indicate that a rain/snow mix will be possible generally during the Monday through Tuesday time frame. If the upper-level storm to our west slows down then our chances for precipitation may last a little longer. It may be cold enough for accumulating snowfall across parts of the local area, and this of course would be particularly true for the Guadalupe, Sacramento, and Capitan Mountains.
Still Watching The Potential For An Invasion
Of Brutally Cold Arctic Air By Mid-Month. 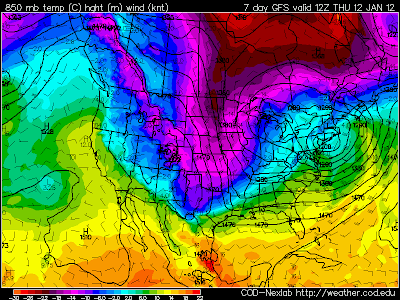 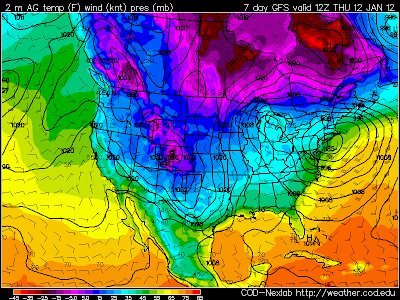 This Mornings 12Z/5 AM MST GFS Surface Temp Forecast.
Valid At 5 AM MST Thu Jan 12, 2012.
Changes in the upper-air pattern over North America may be in the works starting in about a week. It appears that shift in the position of the Polar Vortex may about to under go a shift, which would allow the possibility of the brutally cold arctic air that has been bottled up across Alaska to surge southward into the US. McGrath, Alaska recorded a low temperature of -55F yesterday morning.
There is a lot of discussion among meteorologist, forecasters, and weather enthusiasts concerning this potential change. Should it come to pass...many areas east of the Rockies may have to endure several invasions of brutally cold arctic air beginning around the 10th of this month, and possibly continuing into the end of the month.
The Truth Is Stranger Than Fiction!
on January 05, 2012
Posted by Wendell Malone