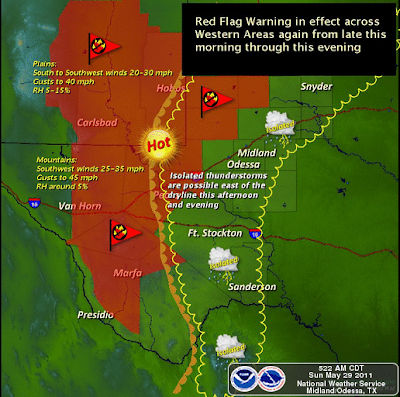 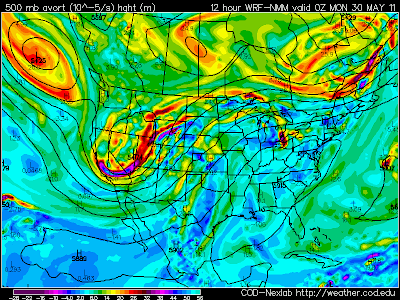 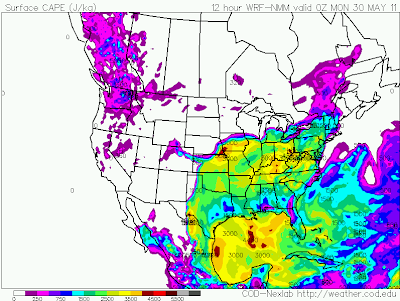 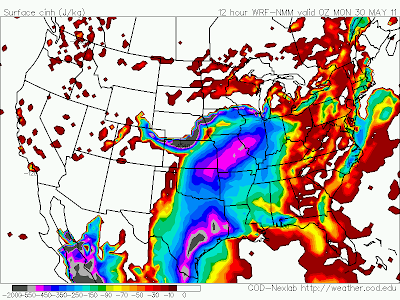 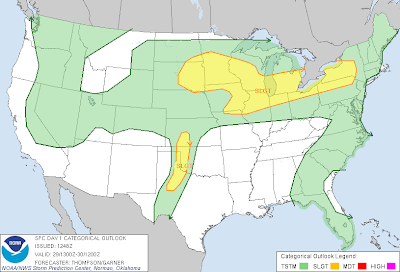 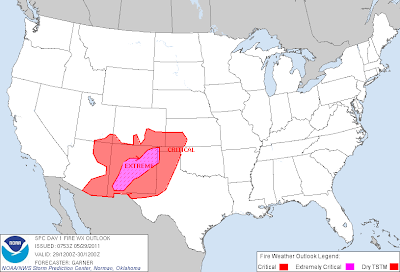 The dryline will is draped across the Permian Basin of West Texas this morning. Dew point temperatures along and east of the dryline are in the 60's. An upper-level low is slowly dropping southward out of the Great Basin.
Surface based cape values are forecast to range from 2,000-3,000 j/kg along and east of the dryliine this afternoon and evening across the Permian Basin. Bulk wind shear values are forecast at around 50 knots, along with steep mid-level lapse rates. However, there will be a fairly stout cap in place across the area. This may inhibit thunderstorms from developing across the area this afternoon and evening.
Early indications are that a few isolated thunderstorms will be possible along and east of the dryline this afternoon and evening. Mainly across the Western Rolling Plains, the Permian Basin, and the Trans Pecos Region of West Texas. A few of these may become severe (high based supercells) and produce large hail and damaging thunderstorm wind gusts.
SE NM-

With the dryline draped across the Permian Basin, we can look forward to another hot, dry, windy day here in SE NM today. Red Flag Warnings are in effect for all of the local area today due to the Critically Dangerous Fire Weather Conditions that continue to plague us.
Southwesterly winds are forecast to gust up into the neighborhood of 35-45 mph once again this afternoon today. Combine this with single digit relative humidity values, and afternoon high temps ranging from 100-105, and we can look forward to another day of blast furnace weather. A Wind Advisory is in effect for Chaves, Lincoln, and Otero Counties.
Severe T-Storms SE NM & W TX Tue-
As the upper-level storm to our northwest gets a little closer to the state, and the dryline backs westward into SE NM Monday night, we may actually have a shot at seeing a few scattered thunderstorms break out over the local area Tuesday afternoon and evening. Some of these could be severe as well. More on this in tomorrows update.