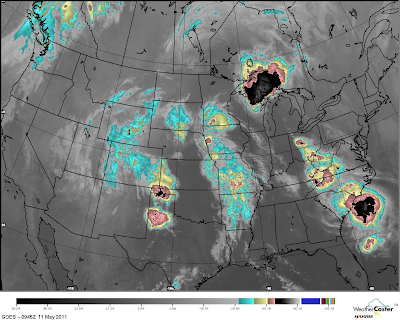 IR Satellite Image Showing A Large Complex Of T-Storms
Over W TX At 3:45 AM MDT.

GRLevel3 Radar Snapshot Of T-Storms In
The Lubbock Area At 4:27 AM MDT.
Fires Currently Burning Across SE NM
Are Indicated By The Red Triangles.
The Yellow Box Depicts Severe
T-Storm Watch #277 Issued By
The SPC At 2:30 AM MDT.

GRLevel3 Radar Snapshot At 4:45 AM MDT
Showing The Satellite Derived Images Of
The Hot Spots With The Mayhill Fire.

Overnight a complex of t-storms developed near the NM/TX state line as an upper level disturbance interacted with a backing dryline. The Clovis Municipal Airport manged to squeeze out .10" of rainfall overnight. No such luck here in SE NM. However the models are hinting at a slight chance for t-storms this weekend. This may be more of a curse than a blessing however. At this time it appears that the moisture content of the atmosphere will be limited so these t-storms may end up being the high based and dry type, producing more wind and dry lightning than rain.
Today into the rest of the work week will be cooler with high temps mostly in the 80's. Critically Dangerous Fire Weather Conditions still plague the area, so please refrain from any type of outdoor activity that involves the use of sparks or flame. And wild fire that may accidentally start will have the potential to rapidly spread and grown in the strong winds and extremely dry conditions.

Posted on May 11, 2011 by Joel Arnwine
For Immediate Release: Tuesday May 11, 2011, 8:00 AM.
Team PIOs Joel Arnwine or LaDawn Saxton Mayhill Fire Information – (575) 652-5508
Detected:  May 9, 2011
Cause:  Under Investigation
Containment: 20 percent
Location:  2 miles west of Mayhill, NM
Fuel Type:  Pinon juniper, Ponderosa Pine/Mixed Conifer
Terrain:  Steep and Rugged
Current Size:  Estimated at 19,000 acres and is burning on the Lincoln National Forest and Private land.
Summary: The fire is burning in steep, rugged terrain. High to extreme fire activity was observed on the fire overnight as the fire continued to progress to the northwest. Today Crews, Engines and Bulldozers will continue to construct fire line focusing on the east side of the fire. Engines will patrol and monitor the fire line throughout the day Crews may burnout as needed to hold fire line as well as continue to patrol and mop up around structures.
Due to extreme burning conditions, an unoccupied structure in 16 Springs Canyon was damaged late last night. Today a damage assessment will be conducted to determine if any other structures were damaged.
Closures: The James Canyon campground is closed. The Lincoln National Forest will close all Forest land on May, 12 2011. The closure affects ALL Public lands under the jurisdiction and proclomated boundaries of the Lincoln National Forest, New Mexico.
Fire Restrictions are in effect on Forest Service lands which ban any type of open burning.  Open Burning Restrictions are also in effect on State and Private Lands throughout New Mexico. For more information on fire restriction please visit www.fs.usda.gov/lincoln. Further information regarding the Mayhill Fire please visit www.nmfireinfo.com or www.inciweb.org.
--------------------------------------------------------
The Queen Fire Forces Evacuation of the Community – 12:00 pm – 5/10/11

Posted on May 10, 2011 by Dan Ware
RED FLAG WARNINGS WILL BE IN EFFECT TODAY STARTING AT 11 AM THRU 10 PM TONIGHT FOR HIGH WINDS, LOW RELATIVE HUMDITY AND EXTREME FIRE BEHAVIOR
Fire Crews in Eddy County responded to a new fire near the community of Queen last night around midnight. The Queen Fire has destroyed an RV and multiple outbuildings and damaged other structures; the fire continues to be very active this morning.
The Village of Queen has been evacuated. Evacuees can shelter in Carlsbad, at Eddy Elementary School. The Red Cross will be providing refreshments and there are cots available. The school is located at 700 W. Stevens, at the corner of Mesa and Stevens.
The Incident Commander estimates approximately 50 residents were asked to evacuate to leave. The fire began between Hwy 137 and Forest Road 525, near the recent Last Chance Fire and has forced the closure of Hwy 137 at Dark Canyon.
Currently, the fire is burning north of the Guadalupe Christian Church camp and fire crews are conducting firing operations around the subdivision to keep the fire from getting closer.  Due to the high winds, aerial resources were only able to drop one load of retardant north of the community.
An estimated 1,500 acres has burned with 0% contained, and smoke from the fire is impacting Carlsbad and surrounding communities.
The school bus route to Queen has been cancelled for today.
Resources on scene include the New Mexico State Forestry engine strike team, Eddy County departments, the BLM and the Forest Service and additional resources have been ordered and are en route. (Carson IHC and State Forestry’s IWC inmate crew)
------------------------------------------------------
CROOKED CREEK COMPLEX FIRE – Fire Update 5/10/11 1:00 am
Posted on May 10, 2011 by Joel Arnwine
For Immediate Release: Crooked Creek Complex Fire Information – (575) 652-5508
Monday May10, 2011, 12:00AM                                          Team PIOs Joel Arnwine or La Dawn Saxton
Acres: 18,196
Start Date:  May 6th 2011
Cause:  Lightning
Location:  15 miles northwest of Hope, NM
Containment: 70 percent
Fuels:  Brush and grass
Terrain:  Steep and Rugged
Resources:  3 engines, 1 water tender, 1 overhead, 1 helicopter
Total personnel: 14
Structures: No Structures threatened/No Evacuations
Agency:  Bureau of Land Management (BLM), New Mexico State Forestry (NMSF), and private land.
Fuel Type:  Grass and Brush
Fire Behavior: Light fire activity, with some interior smoke was observed on the fire today.
Resources:  Pecos Zone Type III Team transitioned with a Type 4 Incident Commander Keller at 1800 hours and will conduct fire suppression activities. Approximately 14 personnel are currently assigned to the fire. Available resources from the Crooked Creek Fire have been reassigned to the Mayhill fire. Resources from the Bureau of Land Management, and area volunteer fire departments, and 1 helicopter will provide aerial reconnaissance; firefighters will continue mop-up and patrol fire.
9,192 acres are burning on the BLM, 631 acres on State Land and 2,063 acres are burning on private lands.
Structures Threatened:  None
Closures:  None
The Truth Is Stranger Than Fiction!
at Wednesday, May 11, 2011