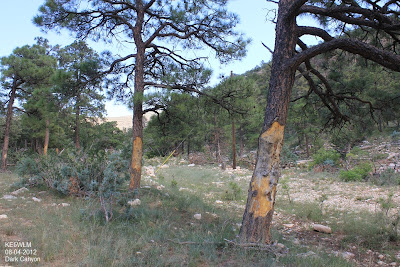 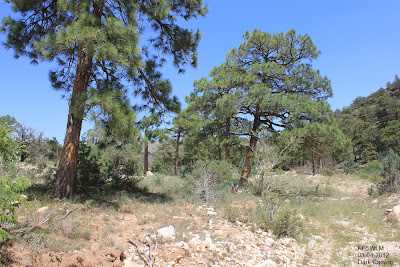 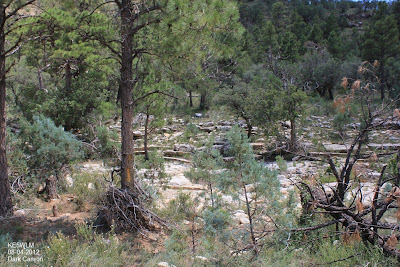 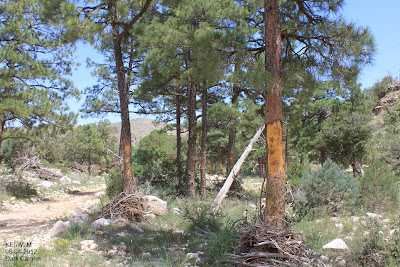 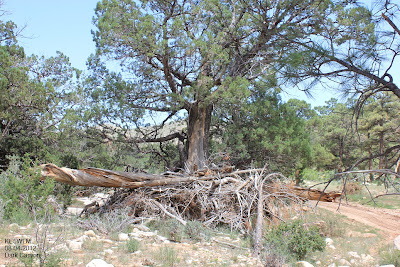 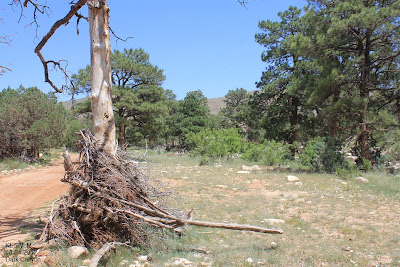 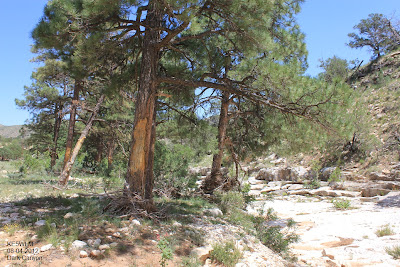 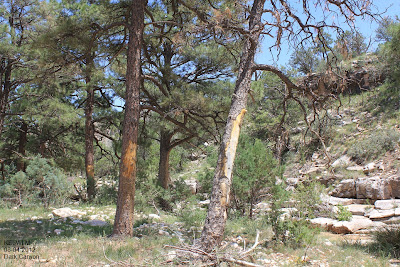 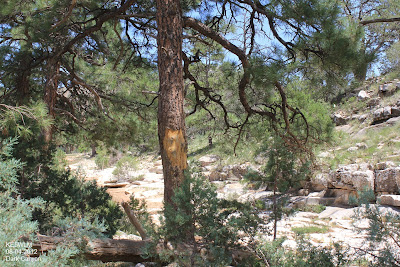 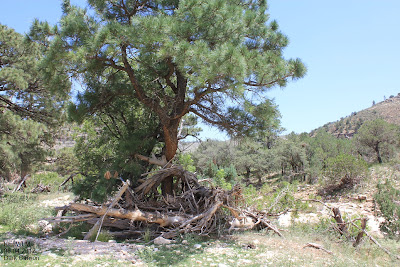 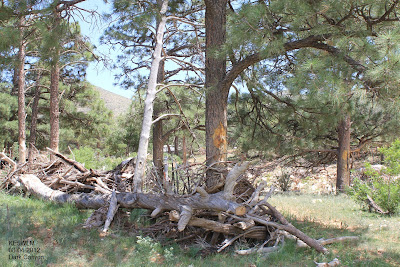 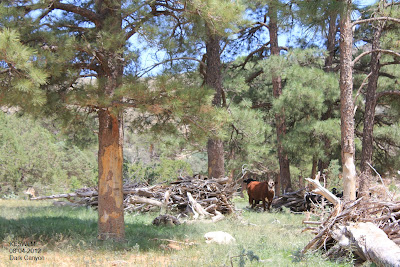 My wife and I drove up to Dark Canyon (south of Queen, NM) last Saturday to check out our camp sites in the canyon. We wanted to see how badly the Lookout Fire had damaged the area last spring. It was bad, but most of the fire damage was on the ridges south of the canyon.

What we discovered instead what an eye opener. I took the above photos in Dark Canyon on Cougar Rd, just a little bit northeast of the Dark Canyon Lookout. Over the past year a couple of flash flood events (in spite of the ongoing drought) have occurred in Dark Canyon south of Queen.

This area of the Guadalupe Mountains has become more susceptible to flash flooding due to the Lookout Fire, as well as other fires in the area, over the past year. It does not take nearly as much rainfall now as would normally be the case, to produce flash flooding in and below these burn scar areas.

These Pine trees have had the bark scoured off of them from the debris (rocks, tree branches, and in some cases whole trees) being carried down the arroyo in the flood waters. Some of the scaring occurred some 6'-8' above the ground on some of the trees, which were located on the north banks of the arroyo near and in the road.

Although I was not there during the flooding, I estimated that the depth of the water in the arroyo had to have been at least 10' deep in some places. Based on how far north out of the arroyo some of the debris had been carried, it appeared to me that the flood waters may have been up to 50-100 yards wide in places.

It should be noted that none of these flood waters from this part of Dark Canyon have managed to flow all the way east to Carlsbad in the past year. These flash flood events appear to have been highly localized, occurring mainly south of the Queen area.

Given the history of flash flooding on the Dark Canyon Arroyo Watershed in Eddy County over the past 120 years, these flood events over the past year appear to have been fairly minor (relatively speaking). Dark Canyon has a long history of flooding, and when the big flash flood events do occur on this watershed, enormous volumes of flood waters flow eastward to Carlsbad, and then empty into the Pecos River at Carlsbad.

This is just a reminder of the dangers of flash flooding in southeastern New Mexico. These photos give you some idea of the power, depth, and velocity of the flooding on our local arroyos during flash flood events.

Please stay out of these arroyos during flash flood events. Do not attempt to walk over, or drive through a flooded arroyo. You may not be able to accurately determine the depth of the water over the roadway, and within seconds you and your vehicle will be swept away. Remember it only takes about 18 inches of flowing water to float most normal sized vehicles away. Most flash flood deaths occur in vehicles and at night.

My Web Page Is Best Viewed With Google Chrome.
on August 10, 2012
Posted by Wendell Malone