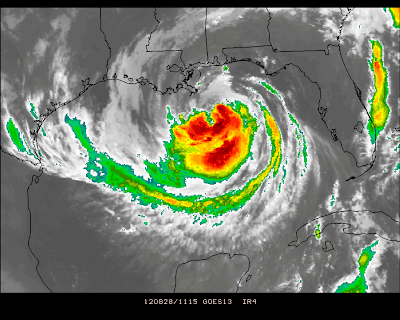 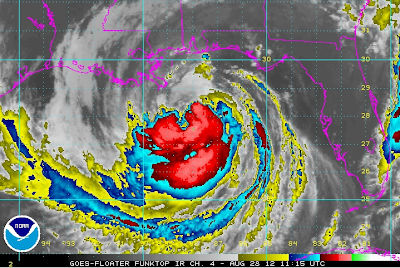 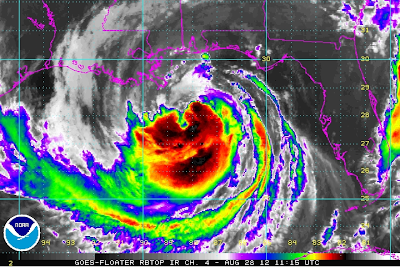 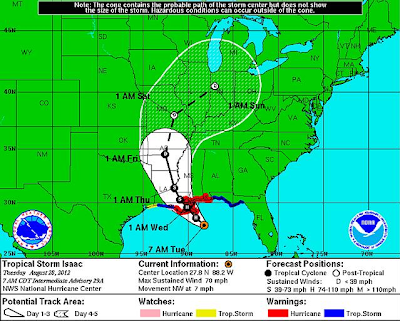 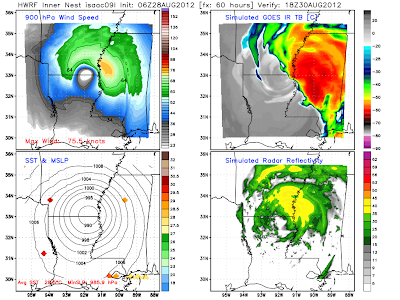 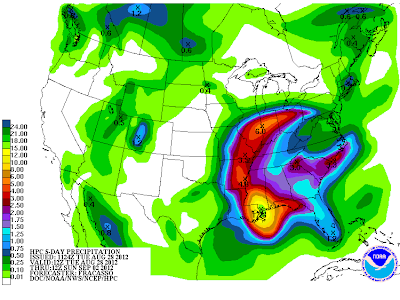 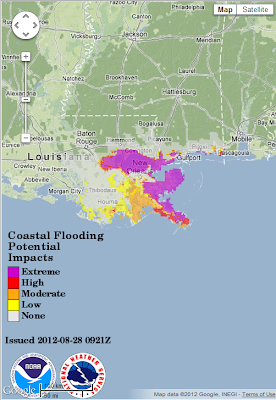 Waiting, waiting, and more waiting on Isaac to strengthen into a Hurricane. Isaac remains a tropical storm as the sun rises over the cyclone this morning. For three days now we have been waiting for the storm to strengthen into a Hurricane and this just has not happened yet. No doubt this has got to be wearing on the nerves of the people living along the coastline of Louisiana, Mississippi, and the Florida Panhandle. Playing the hurry up and wait game with a Tropical Storm or Hurricane cannot be fun, and more of this may be in store for these folks over the next 24 - 36 hours.

Isaac continues to battle dry air at the mid-levels, and this dry air intrusion is disrupting the storms circulation preventing it from strengthening.  If you looked at last night's satellite images of Isaac, you could see that the cyclone had the appearance of being cut in half for much of the night, this was the result of the dry air first wrapping around the eastern side of the storm, and then later the northern side. Another factor inhibiting Isaac from becoming a Hurricane is the shear size of the storm. Isaac's pressure continues to drop and there are signs that he may go ahead and strengthen into a Hurricane today...we've heard that before right, time will tell.

Tropical Storm Isaac was located about 105 miles south-southeast of the mouth of the Mississippi River as of 6 AM MDT this morning. Once again Isaac took a jog to the west overnight, but early this morning his overall movement is now to the northwest at 7 mph. Isaac has slowed down in his forward speed from 14 mph yesterday to 7 mph this morning. He may down a little more today into tonight. Isaac is forecast to basically continue on his northwestward trek today into tomorrow, with some fluctuation in this track and speed possible.

Isaac has sustained winds of 70 mph with gusts to 85 mph. His central pressure has continued to fall and was down to 28.82 inches of mercury, or 976 millibars as of the 6 AM MDT advisory. Tropical Storm force winds extend outward from the center of the storm to 205 miles. Currently the NHC is calling for a storm surge of 6' - 12' along the southeastern Louisiana and Mississippi coastline, when Isaac makes landfall tonight or early Wednesday. If Isaac strengthens today this could change.

Isaac is expected to produce storm total rainfall amounts of 7" - 14" with isolated totals of 20" in southeastern Louisiana, southern Mississippi, southern Alabama, and the extreme western Florida Panhandle. Flashing flooding will be a huge concern in these areas once Isaac moves inland. Tornadoes will be possible today and tonight along the northern Gulf Coast.

Personally, I hope that Isaac does not pull a fast one on everyone and significantly strengthen today into tonight before making landfall. There are a lot of people living in the New Orleans area who did not evacuate, and this could get ugly if Isaac does this.

Please remember that there is still some uncertainty concerning Isaac's exact track and strength from today until he makes landfall sometime within the next 24 - 36 hours. Don't be surprised if Isaac does the unexpected, Hurricanes have a reputation of doing this sometimes.

Please visit the following National Weather Service Offices, listed below, for further details in the local areas that may be impacted by Isaac.

My Web Page Is Best Viewed With Google Chrome.
on August 28, 2012
Posted by Wendell Malone