Isaac To Become A Hurricane Later Today or Tonight. 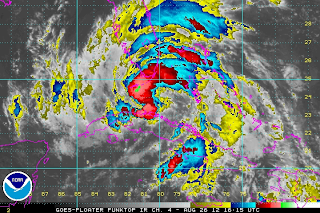 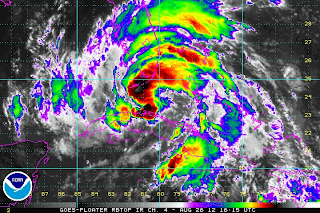 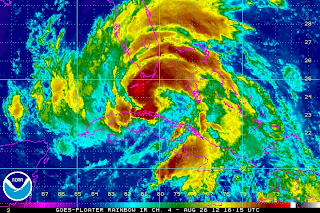 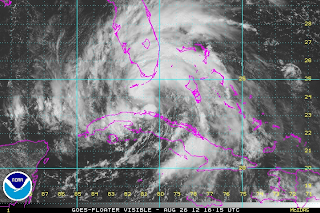 Tropical Storm Isaac Satellite Images As Of 10:15 AM MDT.

Tropical Storm Isaac was located 50 miles south-southeast of Key West, Florida as of Noon MDT today. Isaac's overall strength has not changed much in the past 24-hours according to the NHC. Isaac is forecast to become a Category 1 Hurricane by early tomorrow morning.

Tropical Storm Isaac continues moving off to the west-northwest at 18 mph. His forward speed is forecast to slow somewhat once the cyclone passes over the Florida Keys today into tonight, and enters the eastern Gulf of Mexico by Monday. Isaac currently has sustained winds of 60 mph with gusts to near 70 mph. His central pressure is holding fairy stead at 994 millibars, or 29.35 inches of mercury. 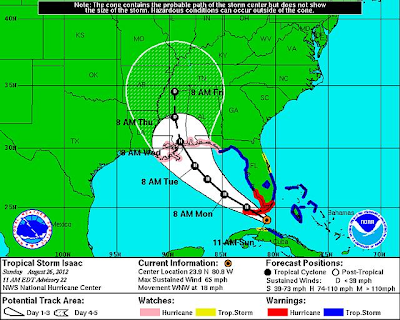 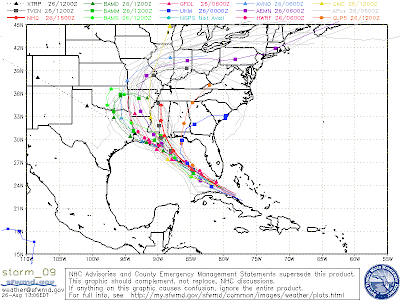 Tropical Storm Isaac continues to be a headache as far as his eventual track and strength is concerned. The forecast models are fairly tightly clustered with Isaac's track today out through 72-hours, its after 72-hours where the waters become muddied. 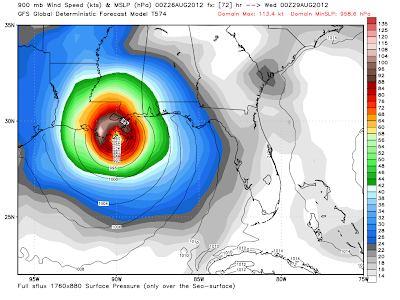 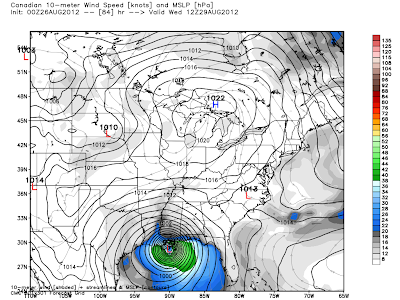 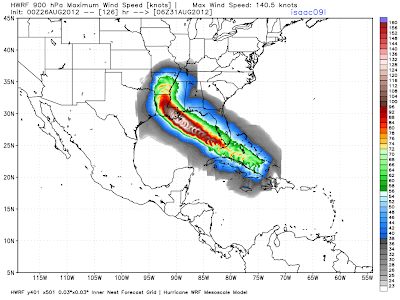 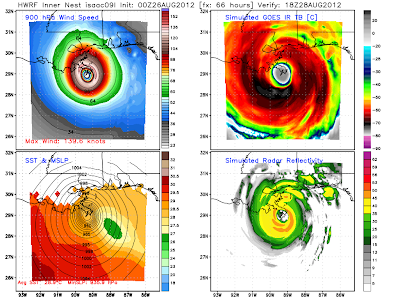 Last night's 00Z/6 PM MDT model forecasts (above) of the US GFS, the Canadian (CMC), and the HWRF models were all forecasting Isaac to make landfall very near New Orleans By Tuesday. Some of the forecast models were indicating that Isaac may become a Major Hurricane, and could potentially move inland as a Category 3, 4, or 5 Hurricane. 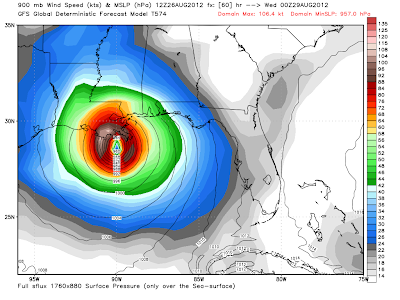 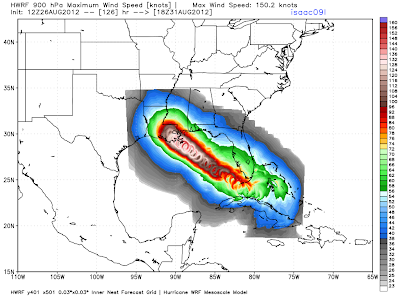 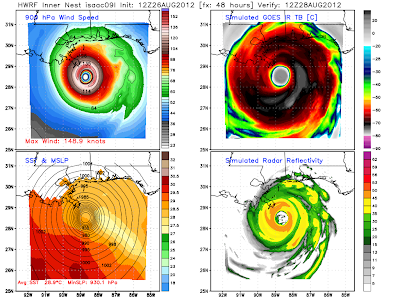 This morning's 12Z/6 AM GFS model run is forecasting Isaac to be located just south of New Orleans, near the mouth of the Mississippi River, by Tuesday around sunset. This forecast has Isaac as a Category 3 Hurricane with sustained winds of near 120 mph.

Even scarier, is this mornings 12Z/6 AM MDT forecast model run of the HWRF. It brings Isaac just south of the mouth of the Mississippi River, by around sunrise Tuesday morning, as a Catastrophic Category 5 Hurricane, with sustained winds of 170 mph. This model then very slowly drags the Hurricane northward to New Orleans by around sunset, with sustained winds of near 155 mph, a strong Category 4 Hurricane, just a few mph short of being a Category 5.

Should these forecasts turn out to be correct, then its not out of the question that New Orleans, or perhaps even nearby locations, could potentially undergo severe devastation from this Hurricane.

We simply do not know for sure yet, just exactly where Isaac is headed, and how strong he will be when he arrives. Not to over hype this Hurricane, but I am very worried that Isaac may be another history maker.

Seven years ago, Hurricane Katrina first made landfall, at 06:10 CDT, in Plaquemines Parish just south of Buras (between Grand Isle and the mouth of the Mississippi River) as a strong Category 3 storm, on Monday August 29, 2005.

As crazy as it sounds there is the very real possibility that we could see history repeat itself in couple of days. This is not set in stone, but the possibilities have a lot of folks very worried.

A great deal of uncertainty remains concerning the details of where Isaac is headed, and how strong he will eventually be when he makes landfall, somewhere between the New Orleans area ,eastward to the Florida Peninsula Tuesday or Wednesday.

As has been the case for the past couple of days now, the National Hurricane Center continues its trend of shifting the cone of uncertainty a little bit further westward with each new forecast.

Now is the time for those of you live anywhere along the Gulf Coast from the Louisiana area eastward to the Florida Peninsula to start preparing for Isaac.