Isaac To Cross Florida Keys-Southern Peninsula As A Hurricane Sunday. 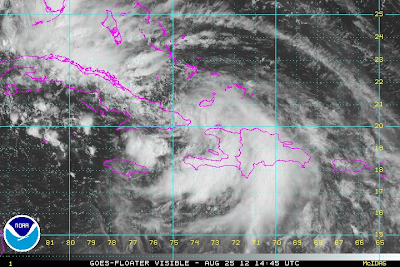 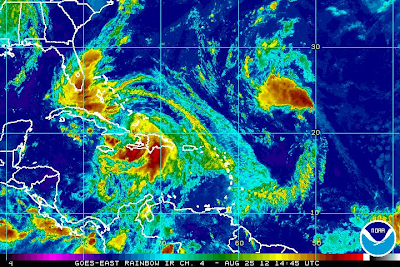 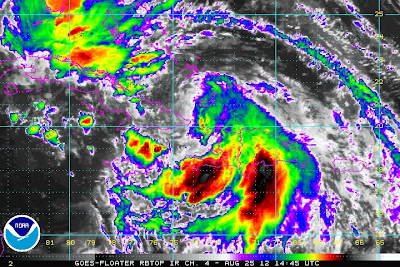 Satellite Images Of Tropical Storm Issac At 8:45 AM MDT.

Tropical Storm Isaac has undergone some disruption as he crossed over Haiti. As of 9 AM MDT, Tropical Storm Isaac was located about 40 miles east of Guantanamo, Cuba. Isaac has sustained winds of 60 mph with gusts near 70 mph. His central pressure has risen slightly to 29.47 inches of mercury, or 998 millibars. Isaac's forward movement is somewhat uncertain this morning, after taking a jog to the west over the past couple of hours. Generally he continues moving off to the northwest at 17 mph.

Isaac To Strengthen Into A Hurricane
As He Crosses Florida Keys & Southern Peninsula Sunday. 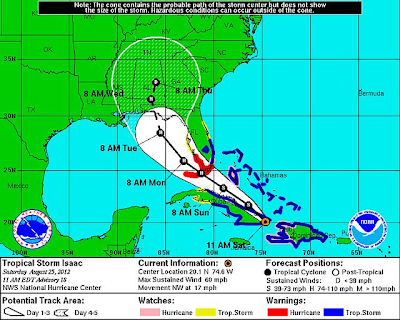 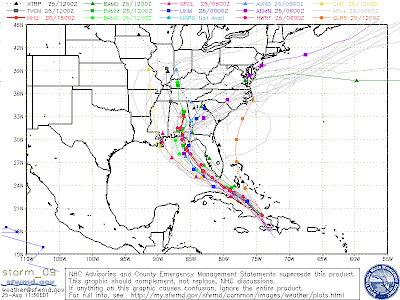 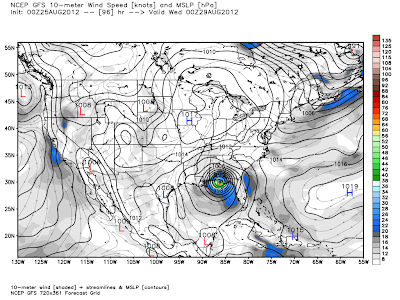 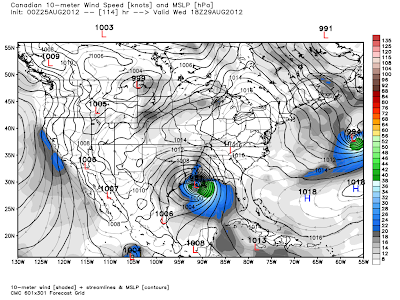 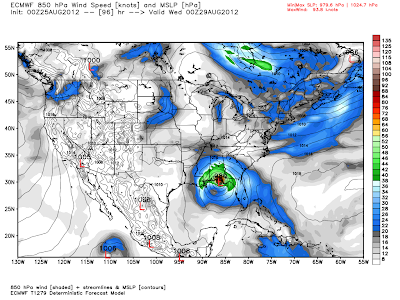 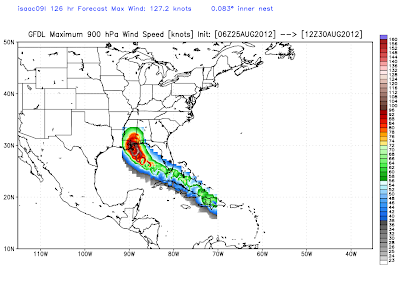 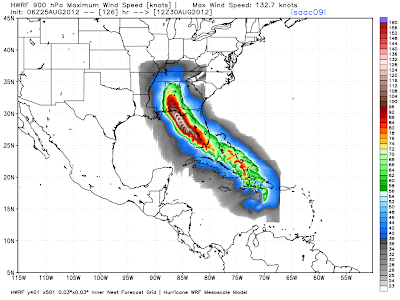 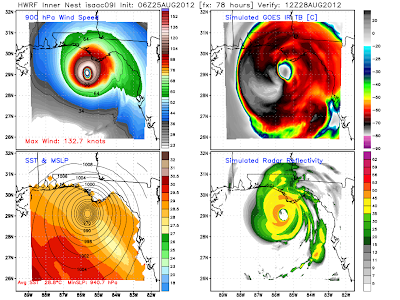 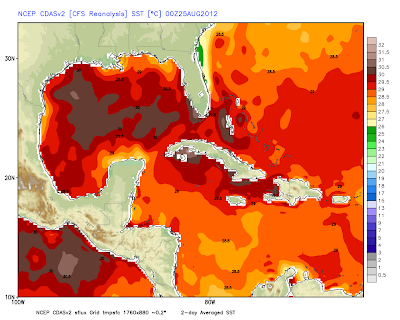 If you have noticed the following computer forecast models, the US (GFS), the Canadian (CMC), and the European (ECMWFC), have all been shifting back and forth (east to west, west to east) on their individual forecast tracks of Tropical Storm Isaac the past couple of days. This is fairly normal and is to be expected. Hurricanes are one of the most difficult meteorological phenomena to forecast.

What you should understand from this, is for now, that there is the potential for what is now Tropical Storm Isaac, soon to become Hurricane Isaac,  to make landfall anywhere from New Orleans to the Florida Panhandle, sometime between early next week into the middle of the week. Various strength forecasts are also being offered by these three models, bringing Isaac inland as weak as a Category 1 (74-95 mph winds) or Category 2 (96-110 mph sustained winds) Hurricane, or as strong as at least a Category 3 (111-129 mph sustained winds) Hurricane.

One thing appears fairly certain at this time,  and that is when Isaac crosses the Florida Keys and southern Florida Peninsula by Sunday or Sunday night, he is currently being forecast to do so as a Hurricane. He is forecast to remain a Hurricane from Sunday until he makes landfall next week.

There remains a great deal of uncertainty concerning Isaac's eventual forecast track and speed beyond about 72-hours from now. Isaac could very well strengthen into at least a Category 3 Hurricane before making landfall.

Should Isaac track further west out over the warmer waters of the central Gulf of Mexico, where surface sea water temperatures are forecast to remain in the mid 80's to near 90-degrees, we could see rapid strengthening of the storm. The winds aloft over the Gulf of Mexico are also forecast to be very favorable for additional strengthening of the storm after 72-hours from now.

This would be some really bad news for folks living anywhere from as far east as New Orleans to the Florida Peninsula. There also remains the potential that Isaac could shift eastward and make a run up the west coast of Florida.

Bottom line is...heads up folks, Isaac future exact track and strength is not yet set in stone. Keep alert, and keeping monitoring for potential changes concerning Issac's strength and future track once he pulls away from Cuba.