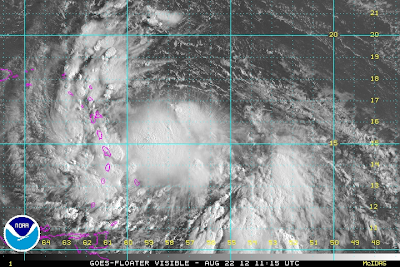 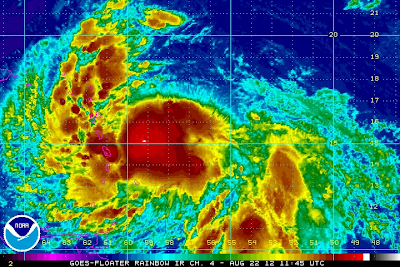 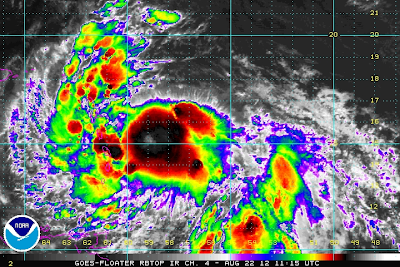 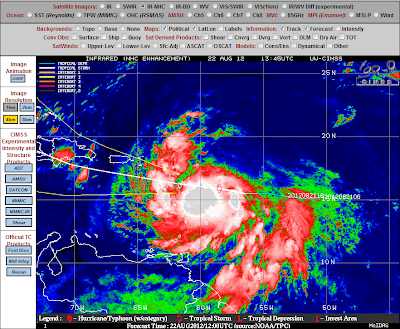 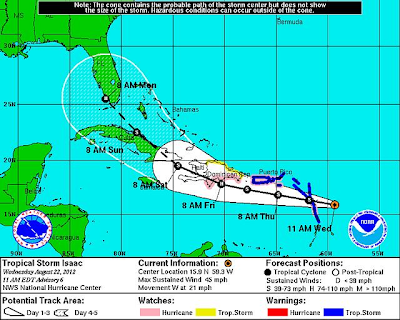 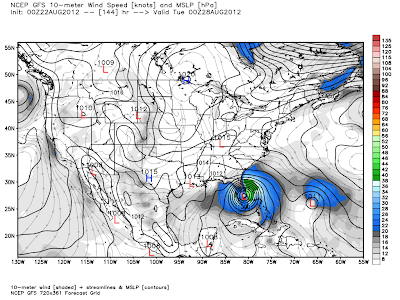 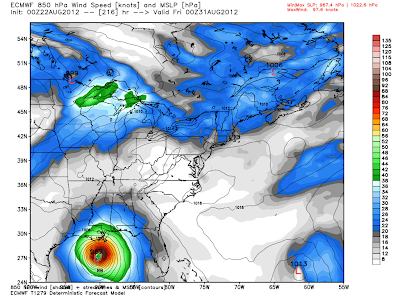 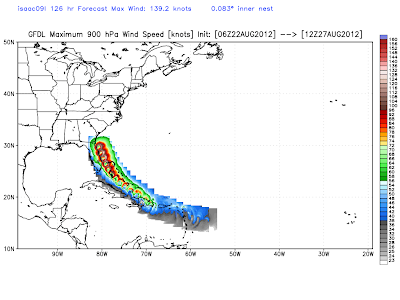 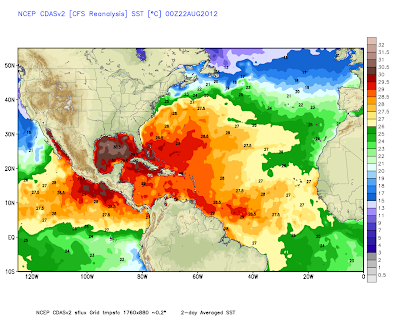 Tropical Storm Issac is slowly strengthening. As of 6 AM MDT, Issac had sustained winds of 45 mph with gusts near 60 mph. His central pressure continues to slowly drop, and was down to 29.65 inches of mercury, or 1004 millibars. Issac was located near 15.7 N and 58.4 W, or about 210 miles east of the island of Guadeloupe. Issac continues to clip along to the west at a rather fast pace of 19 mph.

Issac is over warm waters, and the deep layer wind shear and the mid level wind shear have dropped to below 10 knots. A further decrease of this shear to less than 5 knots is forecast within 24-hours. Conditions appear favorable for Issac to continue strengthening today, and the official National Hurricane Forecast calls for Issac to become a Hurricane by 48 hours. Its possible that Issac may become a hurricane today. A large central dense overcast is visible on this mornings satellite images with cloud top temperatures dropping down to -82C to -86C, or -116F to -123F.

A lot of speculation is ongoing about where Issac is headed. A number of factors could help determine Issac's eventual track across the Caribbean, the Gulf of Mexico, or up the Eastern US Seaboard. An upper-level trough of low pressure is still forecast to drop into the Southeastern US and the northern Gulf of Mexico, creating a weakness in the ridge of high pressure. If Issac tracks over the mountains of the Dominican Republic and Haiti this weekend, his circulation could get disrupted by these mountains and weaken the storm.

If Issac tracks further to the west than is currently being forecast, he could possibly head more towards the central Gulf of Mexico next week. Last nights 00Z run of the European model depicts this. The GFS model on the other hand continues to track the storm further to the east, into Florida, and possibly along the East Coast.

It should be noted that the exact track that Issac will take this weekend into next week is not set in stone, and may change in time. Everyone living along the Gulf Coast of Mexico, in Florida, and the Eastern Coast of the US should keep up to date concerning this potentially dangerous Hurricane.

My Web Page Is Best Viewed With Google Chrome.
at Wednesday, August 22, 2012