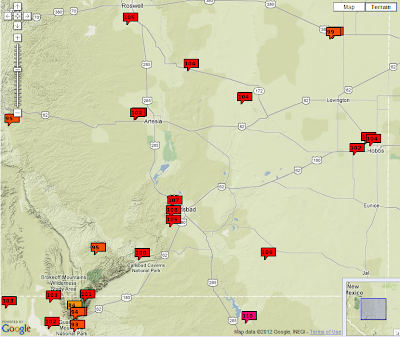 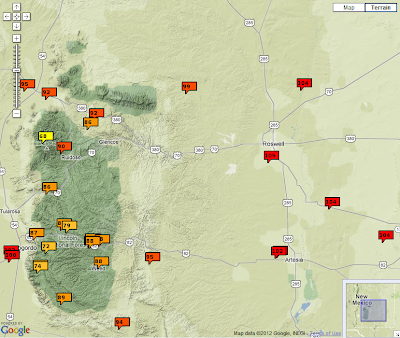 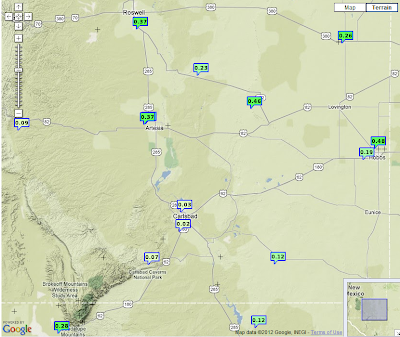 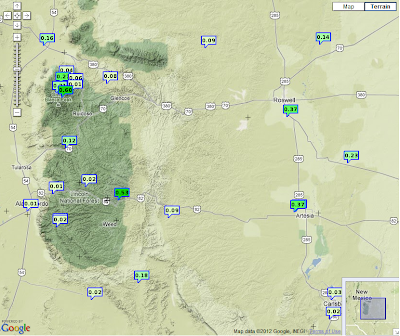 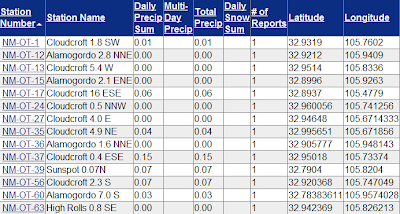 Locally the highest (preliminary) temperature was recorded just south of the state line, near Orla, Texas, at the automated station on the Pecos River with a reading of 110. Just one degree cooler (relative term) was the Paduca Raws, which is located near the WIPP Site, with a high of 109.

Today will be about ten-degrees cooler behind the cold front that entered the area last night. Most of SE NM should see the mid-upper 90's today. We should see our afternoon highs in the upper 90's to the low 100's Tuesday into Thursday.

Scattered thunderstorms formed along, and behind the cold front last night as it eased into SE NM. At 10:15 PM MDT, last night, the Artesia Airport clocked a wind gust of 61 mph from the north-northwest. The visibility also dropped down to 1 mile in blowing dust at that time as a thunderstorm moved into Artesia from the northwest.

I received a call from a lady in Artesia this morning just before 9 AM, saying that there is a lot of tree damage in Artesia as a result of last nights thunderstorm between 10:00 and 10:30 PM MDT. She says there are several large older Chinese Elm trees that are 40'-50' tall that have been blown down. I am heading up there to take pictures and will post them on my web page later today.

The Midland National Weather Service Office issued a Special Weather Statement at 9:56 PM MDT, warning of a strong thunderstorm that was located 11 miles west of Cottonwood, which was moving southeast at 15 mph. The statement called for the possibility of thunderstorm wind gusts to 55 mph, brief heavy rainfall, and dangerous cloud to ground lighting as the thunderstorm moved southeastward into Artesia.

Scattered thunderstorms are once again forecast to pop up over and near the mountains today into late this afternoon. Some of these storms will drift out onto the southeastern plains this evening, with a few of the storms persisting well into the night once again. Once again the stronger of these thunderstorms will be capable of producing locally heavy rain, dangerous cloud to ground lighting strikes, and strong wind gusts near 50 mph. Localized flash flooding may occur over and below the burn scar areas in the mountains. 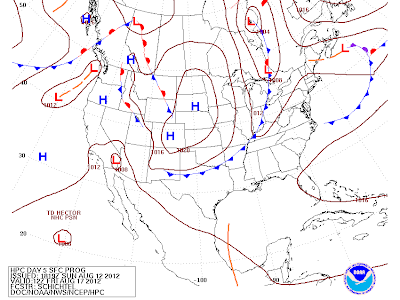 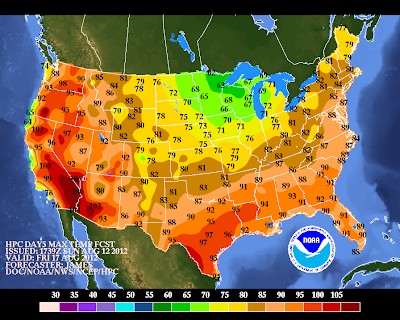 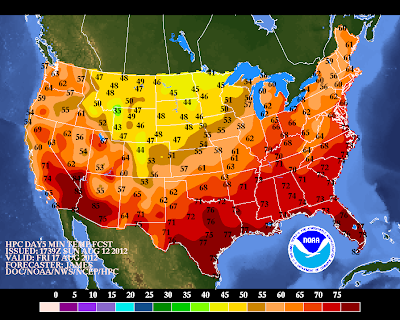 Maps Are Courtesy Of The NWS HPC.

A strong fall-like upper-level short wave trough of low pressure is forecast to swing across the northern states later this week. This upper-level storm will help to shove a fairly strong cold front southward, and into southeastern New Mexico by Thursday night or early Friday morning.

Scattered thunderstorms will likely accompany this cold front as it works its way southward down the eastern, and southeastern plains Thursday afternoon and evening. Friday looks like it will be cooler behind the front, with many of us having highs only in the 80's. Some of us may see lows Saturday morning in the upper 50's to low 60's behind this next cold front.