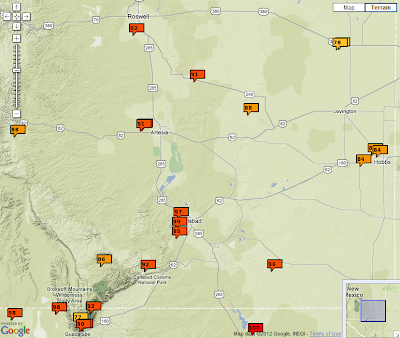 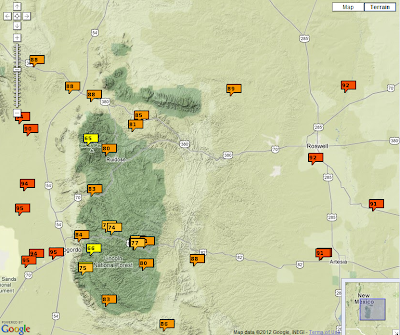 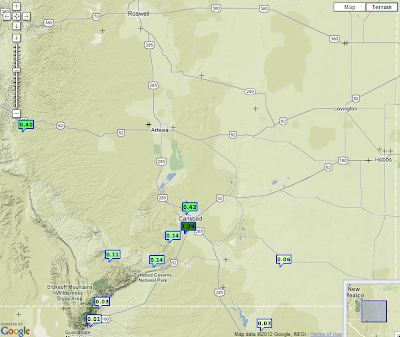 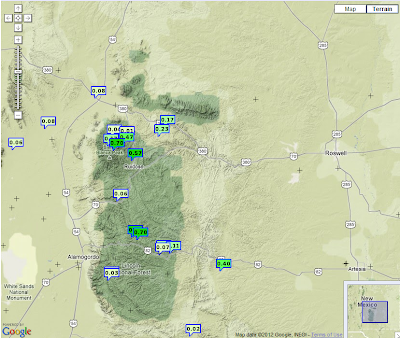 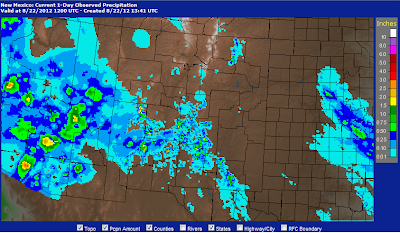 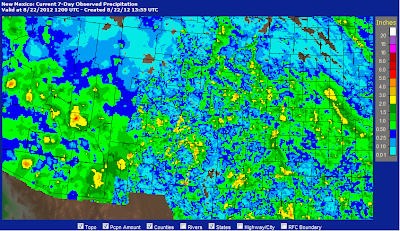 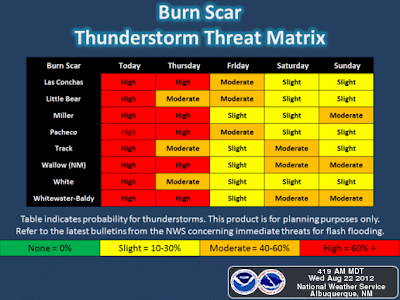 A High Water Rescue occurred on Gavilan Canyon Rd. when a vehicle attempted to drive through flood waters, and apparently high centered, on the boulders in the flood waters. The driver escaped without harm. Flood waters reached a depth of 4' at the height of the flooding.

Flash flooding also occurred on the Rio Ruidoso at the Fox Caves, 6 miles east-northeast of Ruidoso. The river was reported to be out of its banks. A Flash Flood Watch remains in effect for Lincoln County today. Thunderstorms could produce rainfall rates of 1.50" to 3.00" per hour, which will lead to flash flooding, especially over and below the burn scar areas. This may lead to life threatening flash flooding in these locations....please never attempt to cross a flooded stream or arroyo! TURN AROUND - DON'T DROWN!

Late yesterday afternoon thunderstorms developed southwest through north of Carlsbad. The Carlsbad Airport recorded 1.29". 1.00" was reported on Wagon Wheel Rd south of town. .90" was reported 3 miles west of the airport, .80" was reported in La Huerta in northeast Carlsbad, and .73" was reported 5 miles southeast of town. I picked up .42" here at my home in town, which brings my August total up to 1.81", and my 2012 yearly total is now up to 9.83".

Today's weather across the southeastern plains should mimic yesterday's. Widely scattered thunderstorms will dot the plains, especially this afternoon and evening. The heavier storms will be capable of producing wind gusts to near 50 mph, brief heavy rainfall, and deadly cloud to ground lightning.

We will see an increase in thunderstorm activity tomorrow into the weekend as an upper-level trough of low pressure located in California this morning, swings eastward across the state.

My Web Page Is Best Viewed With Google Chrome.
at Wednesday, August 22, 2012