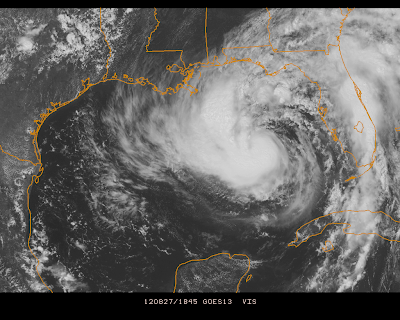 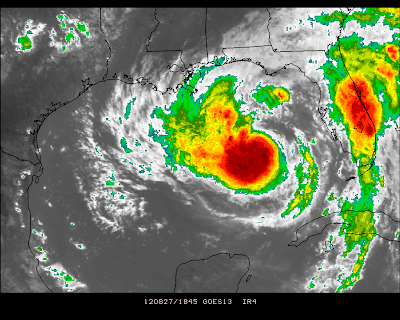 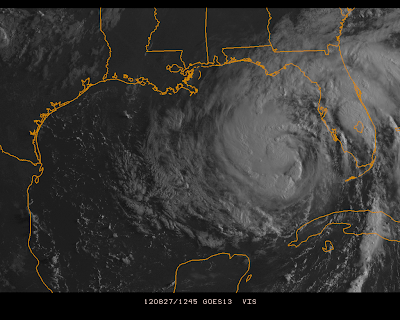 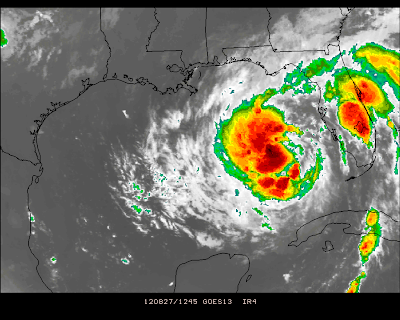 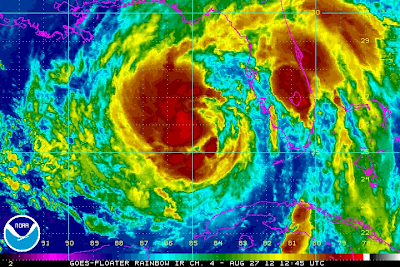 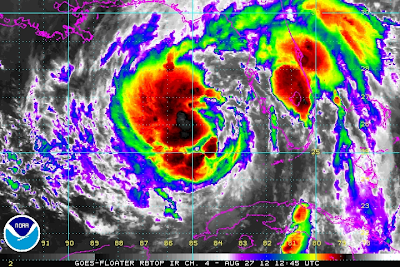 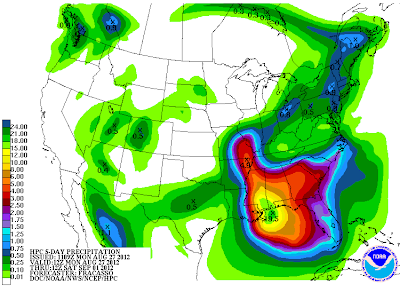 Tropical Storm Isaac  is slowly strengthening as of the 3 PM MDT advisory from the NHC. Isaac's sustained winds are now up to 70 mph with gusts to 85 mph. His central pressure is dropping at 28.97 inches of mercury, or 981 millibars. Isaac is moving to the northwest at 12 mph. The storm is slowing down in its forward movement, and strengthening will likely continue over the next 24 hours. The pressure has dropped 7 millibars since last advisory.

Isaac has been wobbling to the west this afternoon. A Central Dense Overcast (CDO) has developed, and an eye is showing up in the Recon data. Dry air at the mid-levels of the atmosphere still lurks to the east and southeast of the CDO, and if this dry air is ingested within the storm, it will disrupt the circulation and slow the strengthening process. Otherwise, a very favorable upper-level pattern awaits Isaac as he moves over the very warm waters of the Gulf over the next 24-hours. Isaac could be a Hurricane by the 6 PM MDT Advisory.

Tropical Storm Isaac  still has sustained winds of 65 mph with gusts near 75 mph as per the Noon MDT National Hurricane Center update. Isaac's pressure is slowly dropping at 29.06 of mercury, or 984 millibars. Isaac is moving to the northwest at 14 mph. The NHC still thinks that Isaac will slow down in his forward movement and strengthen with the next 24 hours. Isaac is forecast to continue on a west-northwest to northwest course over the next 24 hours. Again, even though I sound like a broken record when saying this, there still remains a great deal on uncertainty concerning the exact track and strength of Isaac.

Little has changed with Tropical Storm Isaac's strength and forecast track as of the 9 AM MDT briefing from the NHC. Issac still has sustained winds of 65 mph gusting near 75 mph. He was located about 310 miles southeast of the mouth of the Mississippi River, and continues moving off to the west-northwest at 14 mph. His central pressure remains the same at 29.18 inches of mercury, or 988 millibars.

Tropical Storm Isaac has become better organized overnight, but has not strengthened as of 6 AM MDT. Isaac had sustained winds of 65 mph with gusts to near 75 mph at this time. His central pressure had fallen to 29.18 inches of mecury, or 988 millibars. Isaac took a jog to the west last night, but is moving to the west-northwest at 14 mph this morning. Tropical storm force winds extend 240 miles outward from the center.

Tropical Storm Isaac continues to struggle as far as strengthening into a Hurricane is concerned this morning. Initially the storm was forecast to reach Hurricane strength yesterday as it cleared the Florida Keys. Now out over the very warm waters of the eastern Gulf of Mexico, this has yet to happen. However, Isaac's pressure is slowly dropping this morning and he is still forecast to become a Hurricane within 24-hours. 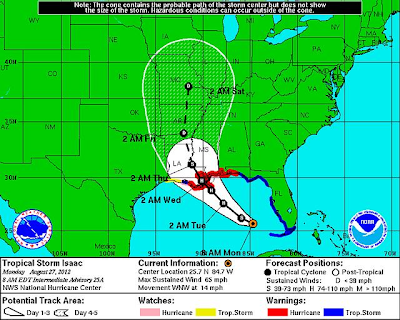 NHC Forecast Track Of T.S. Isaac As of 6 AM MDT. 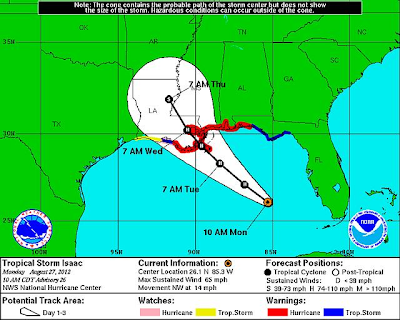 NHC Forecast Track Of T.S. Isaac As of 9 AM MDT. 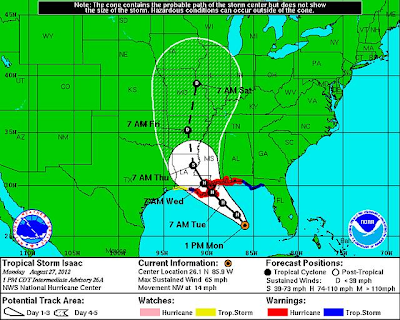 NHC Forecast Track Of T.S. Isaac As Of 1 PM MDT. 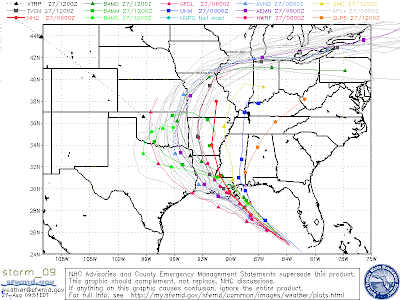 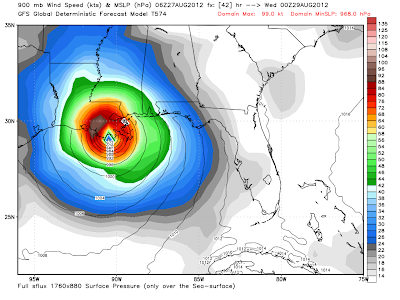 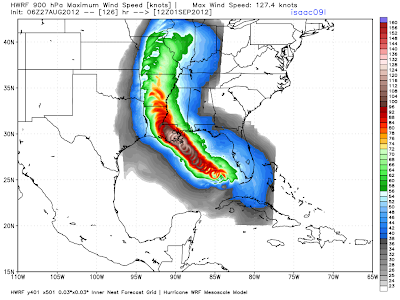 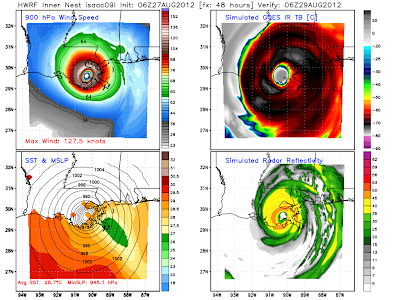 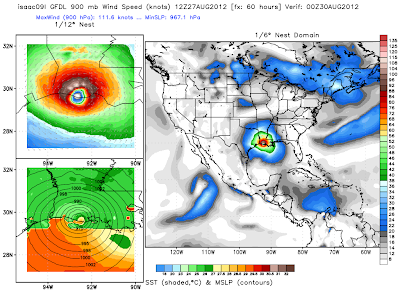 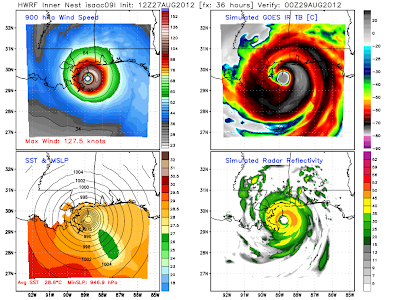 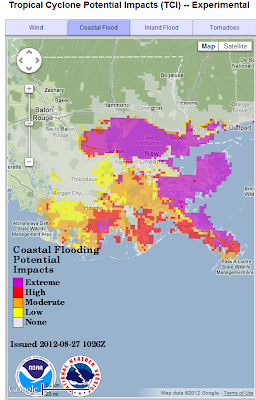 One of the hardest things to forecast is a Hurricane's strength and track. Isaac is giving meteorologists and forecasters a run for their money, and so far, has failed to live up to model forecasts strength-wise. Today should be crucial as far as how much Isaac strengthens, and where he eventually heads. Should the storm slow down, and track further to the west, out over the warmer Loop Current located in the central Gulf of Mexico, Isaac could potentially explode in intensity. If the storm tracks more to the north then this is less likely to happen. Isaac is forecast to slow his forward movement off to the northwest today, and this too should allow the storm to strengthen.

Last nights models have continued the trend of forecasting the track of Isaac further to the west with time. Some of these model forecasts have indicated that Isaac could move right up to the mouth of the Mississippi River, south of New Orleans, and either stall or crawl slowly inland as a powerful Category 3, or 4 Hurricane. Will this happen? We simply don't know yet.

Anyone living along the Gulf Coast from Texas to the Florida Peninsula (click on this map to visit any National Weather Service Office in the affected areas) should take stay abreast of Isaac's track today, and be prepared to react accordingly, tomorrow may be too late.

For now, it appears that Isaac is taking on New Orleans, slamming the city sometime on Tuesday or Wednesday. Ironically, this comes seven years, nearly to the day, that Category 3 Hurricane Katrina devastated the city on August 29, 2005.

It is very important to note that the exact track and strength of Isaac is not yet a given. This may, and likely, will change today, as the Tropical Storm moves over the warmer waters of the Gulf of Mexico.

There has been, and continues to be, a lot of comparisons to Isaac possibly repeating Hurricane Katrina's track, strength, and impacts on New Orleans seven years ago. Many people are wondering whether or not Isaac is going to be another Katrina, or God forbid, something worse. Honestly, nobody knows for sure yet, so its best to prepare for the worst, and hope for the best, if you live in any of the possible areas that may be affected by Isaac!

Please visit the following National Weather Service Offices, listed below, for further details in the local areas that may be impacted by Isaac this week.

My Web Page Is Best Viewed With Google Chrome.
on August 27, 2012
Posted by Wendell Malone