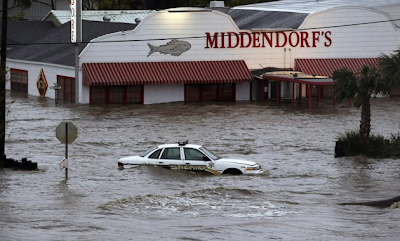 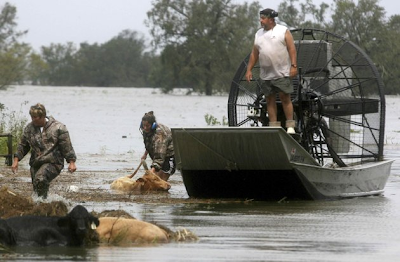 Sherry Henson (L) and Charmin Cosse work in the water to try to
save cattle along Highway 23 after Hurricane ISAAC in  Plaquemines
Parish, Louisiana August 30, 2012. REUTERS/Sean Gardner. 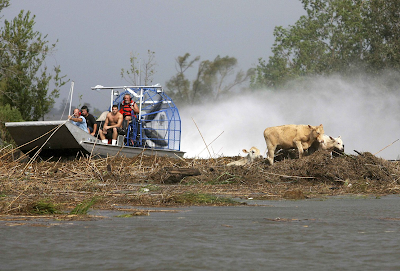 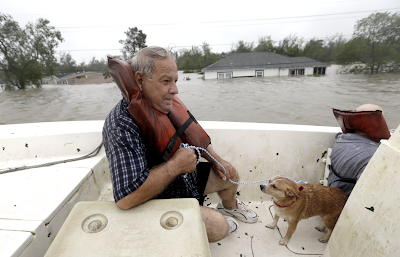 Carlo Maltese and his dog Pin ride in a boat after being rescued
from his flooded home as Hurricane Isaac hits  Wednesday,
Aug. 29, 2012, in Braithwaite, La. (AP Photo/David J. Phillip) 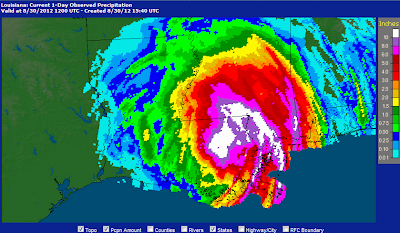 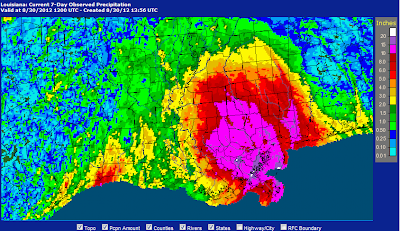 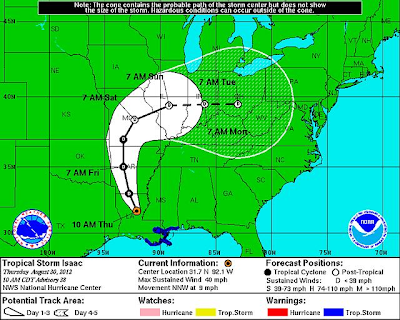 NHC Forecast Track Of Isaac.
Tropical Storm Isaac was located 50 miles south of Monroe, Louisiana, or 165 miles northwest of New Orleans, Louisiana as of 9 AM MDT this morning. Isaac continues to slowly weaken as he heads north-northwestward at 9 mph. His winds are sustained at 40 mph with higher gusts, and the central pressure has risen up to 29.15 inches of mercury, or 987 millibars.
Isaac will continue to weaken, and by tonight the storm should only be a depression. The storm is forecast to move over Louisiana today, into Arkansas tonight, and southern Missouri by Friday night.
Isaac has produced some very rainfall amounts across parts of Louisiana and Alabama. A CoCoRaHS station located 2.3 miles WSW of Hammond is reporting a two day total of 11.93".   Storm total rainfall amounts of 7" 14", with isolated totals of up to 25", are expected from Isaac before the rains end. Flooding and flash flooding continues this morning as a result of these heavy rains and storm surge. Some 700,000 residents have been left without power in the area.
The Truth Is Stranger Than Fiction!
My Web Page Is Best Viewed With Google Chrome.
Email Post