A Cold Reality.
By Alan Caruba. 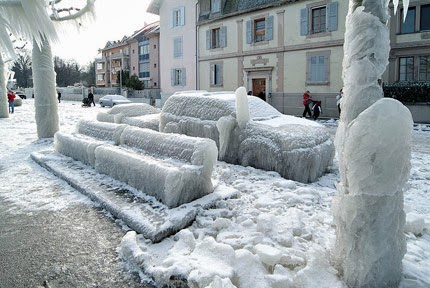 "It’s not as if those in the Northeast have not experienced bone-chilling cold or that it is predicted to extend from the Midwest down into our southern States. There may possibly be a snow storm that will require the National Football League to reschedule the Sunday, February 2ndSuperbowl at the MetLife stadium in East Rutherford, N.J. Crews spent 18 hours working to remove the snow from last week’s storm.

Meteorologist Joe D’Aleo of WeatherBell Analytics and editor ofhttp://www.icecap.us says that, as the President addresses the nation on Tuesday, every State will have freezing temperatures and parts or all of 27 States will be below zero.
All this is occurring as President Barack Obama is anticipated to talk about “climate change”, a warming Earth, during his Tuesday State of the Union speech. He will be speaking to the idiots who still think the Earth is warming because they are too stupid or lazy to ask why it is so cold.
Michael Bastasch, writing for The Daily Caller on Saturday, confirmed D’Aleo’s and other meteorologist’s forecasts. “The bitter cold that has hit the U.S. East Coast is expected throughout February, and on Jan 28—the day of the address—the Mid-Atlantic region is expected to be hit with freezing cold air that could drive temperatures below zero in big cities among the I-95 corridor.”

Washington, D.C. will be one of those cities, but as Bastasch reported, “Environmentalists and liberal groups are urging Obama to use the speech to reaffirm his commitment to fighting global warming. ‘President Obama should rank the battle against climate change as one of his top priorities in his State of the Union speech next week’, said Center for Clean Air Policy president Ned Heime.”

For environmentalists, it does not matter if the real climate is a deep cold. They committed to the lies about global warming in the late 1980s and the United Nations Intergovernmental Panel and Climate Change (IPCC) has maintained the hoax ever since. Along the way we learned that the computer models on which it based its assertions and predictions were rigged and bogus, but that has not deterred the IPCC which is now referring to a “pause” in global warming. This is lying on a global scale.

It was the environmental group Greenpeace that put out a television advertisement featuring a Santa Claus telling children that he might have to call off Christmas because the North Pole was melting. How malicious can they get? When a group of global warming scientists and tourists took a ship to the Antarctic to measure the “melting” ice down there, the ship got caught in the ice which also resisted the efforts of two icebreaker ships to rescue them.

We are dealing with environmental groups, the IPCC and government leaders like Obama for whom the telling of huge and blatantly obvious lies about global warming is nothing compared to the billions generated by the hoax for the universities and scientists that line their pockets supporting it and industries that benefit by offering ways to capture carbon dioxide or conserve energy by first banning incandescent light bulbs.

The “pause” has lasted now for seventeen years and, as is the case with all climate on the Earth, the reason is the Sun.

A report published by CBN News noted that “The last time the sun was this quiet, North America and Europe suffered through a weather event from the 1600s to the 1800s known as ‘Little Ice Age’ when the Thames River in London regularly froze solid, and North America saw terrible winters. Crops failed and people starved.”

Jens Pedersen, a senior scientist at Denmark’s Technical University, said that climate scientists know the Earth stopped warming 15 years ago. But the United Nations Intergovernmental Panel on Climate Change, of which Pedersen is an expert reviewer, suppressed a recent report from its own scientists that the U.N.’s climate model has been proven wrong.

“Global warming is nowhere to be found,” said David Deming, a geophysicist at the University of Colorado, in a January 16 commentary in The Washington Times. “As frigid conditions settled over the nation, global-warming alarmists went into full denial mode”, adding that “weather extremes also seem to bring out the lunatic fringe” and that is why the public is being told that cold weather has been caused by global warming!

Whatever the President has to say about “climate change” should be taken as just one more example of five years of lies to advance policies that have nothing to do with the welfare of Americans needing jobs or the execrable Obamacare attack on the U.S. healthcare system.

The cold reality may well be a Superbowl played on another day and a President for whom the truth is incidental to his shredding of the U.S. Constitution, the increase in the nation’s ever-growing debt, a lagging economy, and his intention to by-pass Congress rather than working with it.

That kind of thing will put a chill up any American’s spine if you think about it."