Update On The Pause In Global Warming.

Setting The Record Straight On ‘The Cause Of Pause In Global Warming. 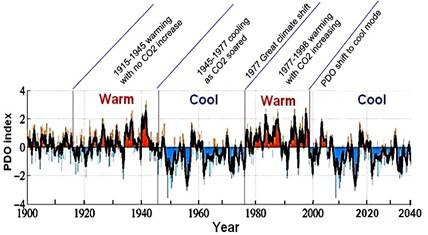 Last week in my post ‘‘The cause of pause in global warming,” I presented data showing that the lack of global warming was not the ‘biggest mystery in climate science,’ “but, in fact, it really isn’t a mystery at all, it was predicted in 1999 on the basis of consistent, recurring patterns of the Pacific Decadal Oscillation (PDO) and Atlantic Multidecadal Oscillation (AMO) and global climate.”

A war is ragging in the weather/climate/political world and its centered around "Global Climate Change". Which by the way until recently was referred to as "Global Warming". The supporters of this theory simply do not understand or refuse to understand that the planet's climate cycles. It always has and always will.

Likewise New Mexico suffers multiple droughts during the Cold PDO's such as 1880-1915, and 1945-1977 with the worst drought on record during the 1950's. Now that the Pacific has "flipped" again and we are back in a Cold PDO Cycle 1999-2014, once again drought has returned. Remember how dry 2011 was? With this current Cold PDO Cycle only roughly about half over we can expect to see more drought in the coming years in my opinion.

Its not that hard to figure out. When the Pacific Ocean cools down we loose an important supplier of moisture here in the Desert Southwest and droughts prevail. Our summers tend to be hotter also. Our winters also tend to be drier and colder. Most of the coldest temperatures ever recorded in New Mexico have occurred during Cold PDO Cycle's. Of there are variations and exceptions but overall the trend it pretty telling in my opinion.

There is a fly in the ointment however and that is what is going on with the Sun. In spite of the constant bombardment from the Political Left concerning Global Warming, there is a growing number of scientists and climatologists who believe that we may be headed towards another Little Ice Age. If in fact we are headed into another Little Ice Age..the impacts upon humanity will be far more devastating and far reaching than Global Warming could ever be.

Listed below are some of my  blogs about this subject.

Has The Sun Gone To Sleep?

My Web Page Is Best Viewed With Google Chrome.
at Tuesday, January 21, 2014