Changes In Our Local Wx Are Coming.

Temperatures @ 5 AM MST This Morning. 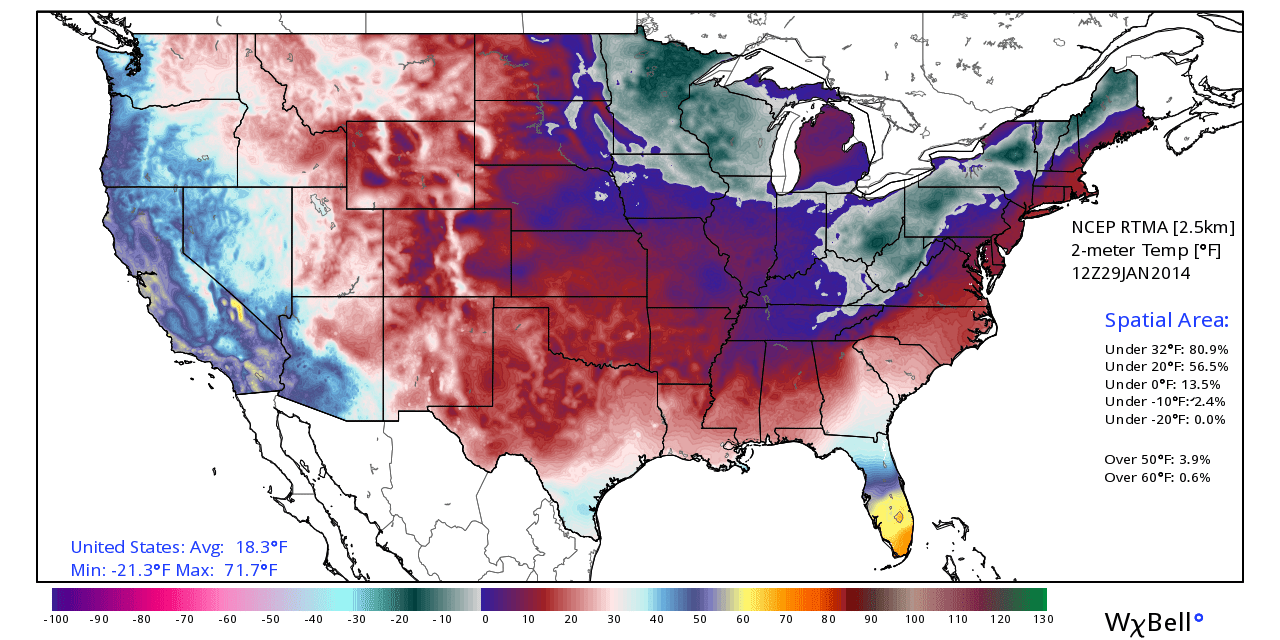 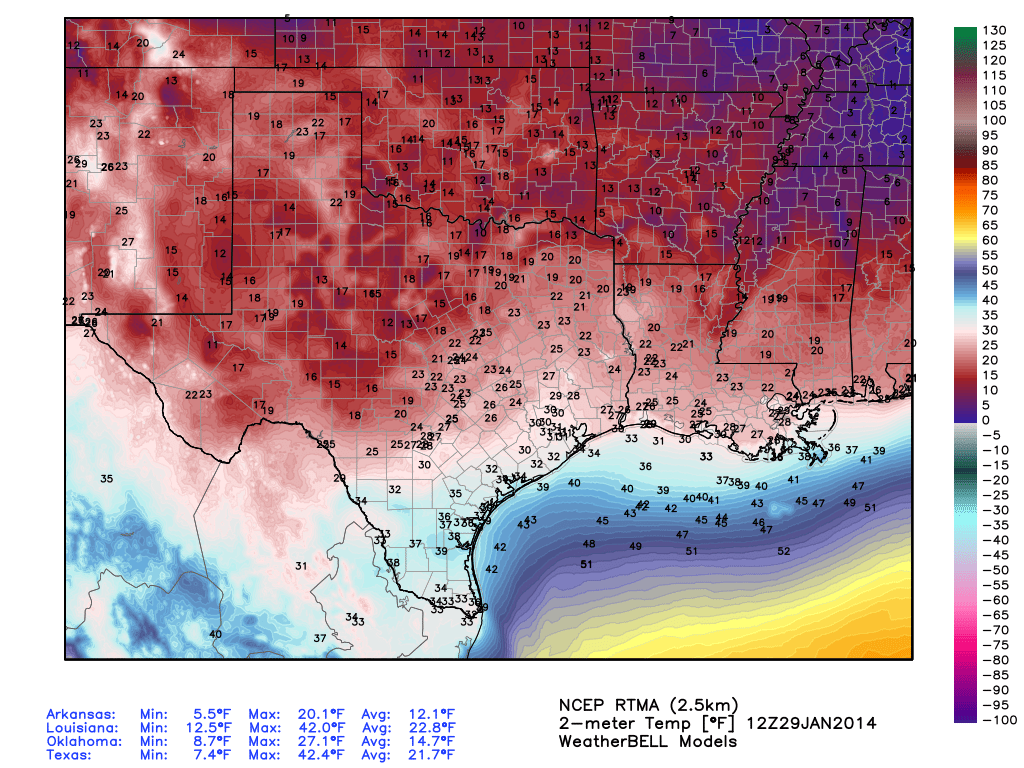 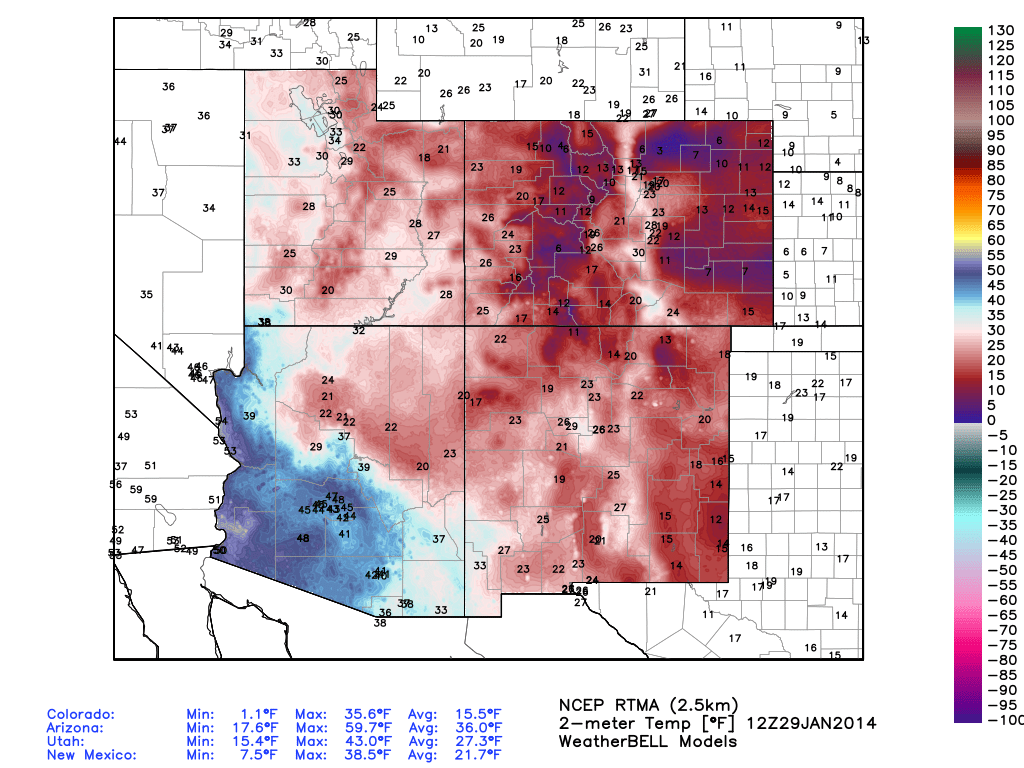 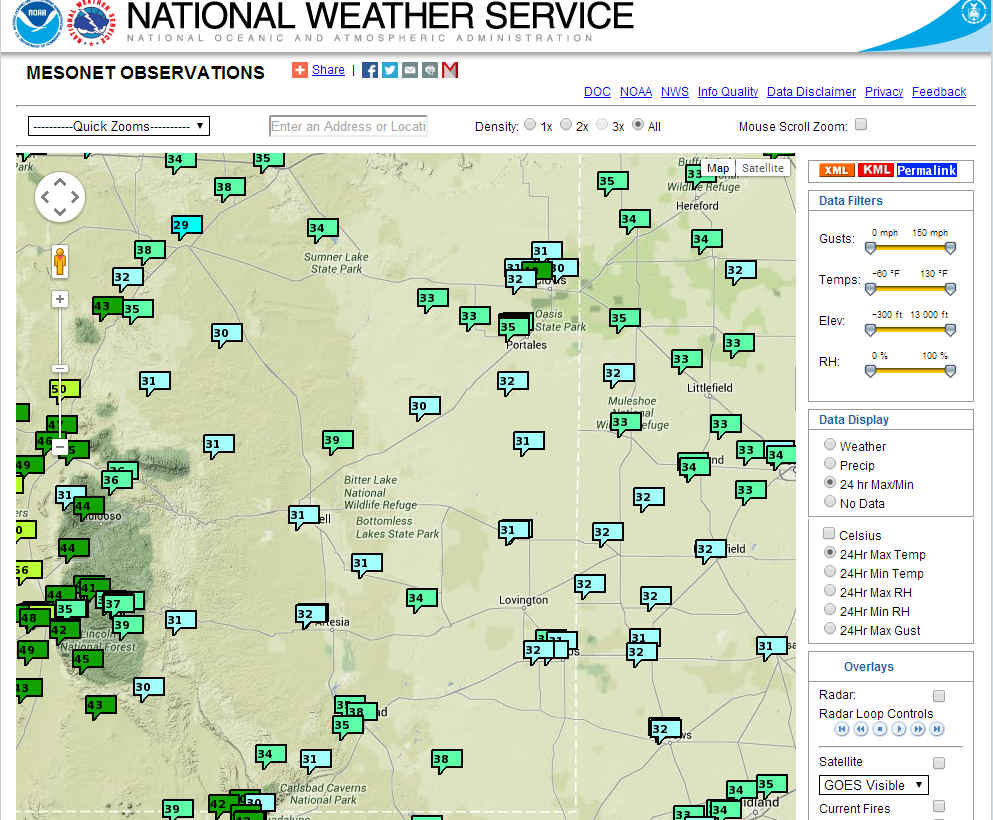 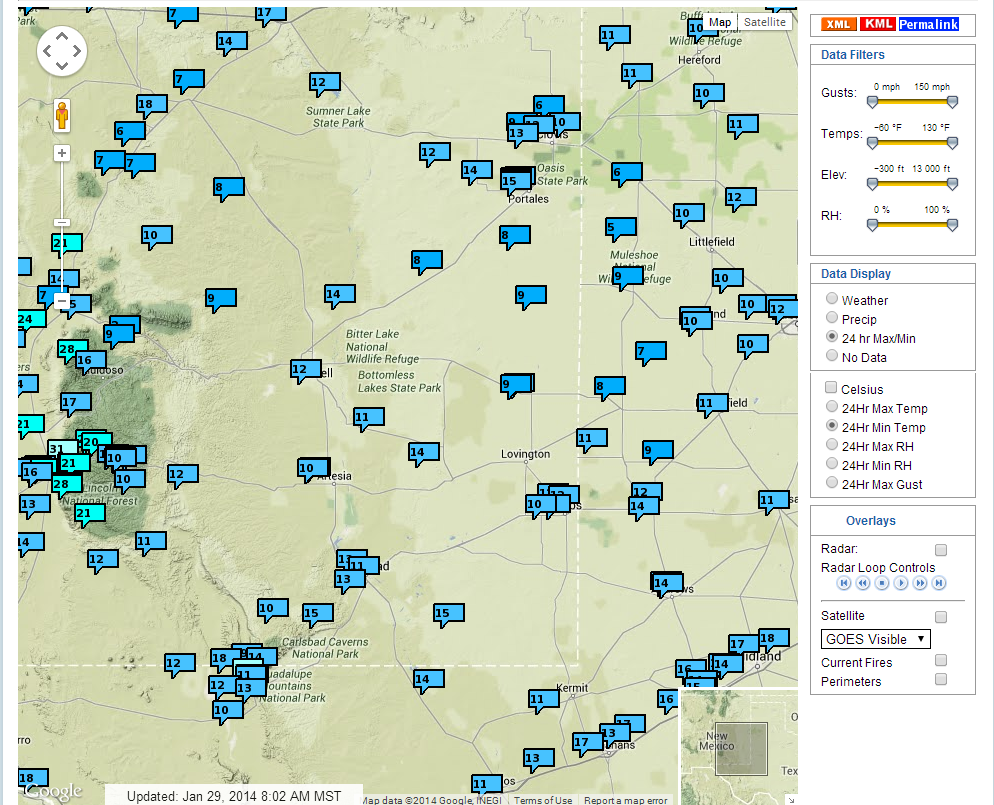 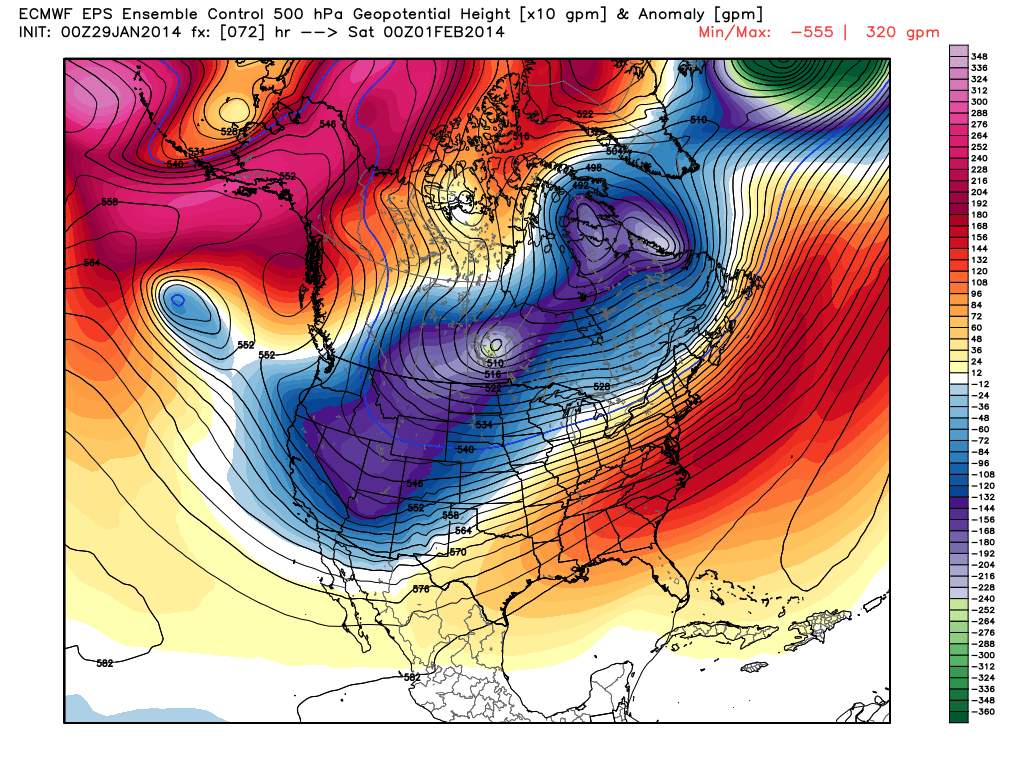 For the past month an unusually strong ridge (West Coast Death Ridge) of high pressure (500 MB) has been more or less anchored just off the Western U.S. Coastline. Finally the models are showing signs of this ridge breaking down. A disturbance diving southward out of northwestern Canada and into the Pacific Northwest tonight into Friday will help to break this ridge down. By Friday at sunset a trough of low pressure (500 MB) will be sweeping across the state. 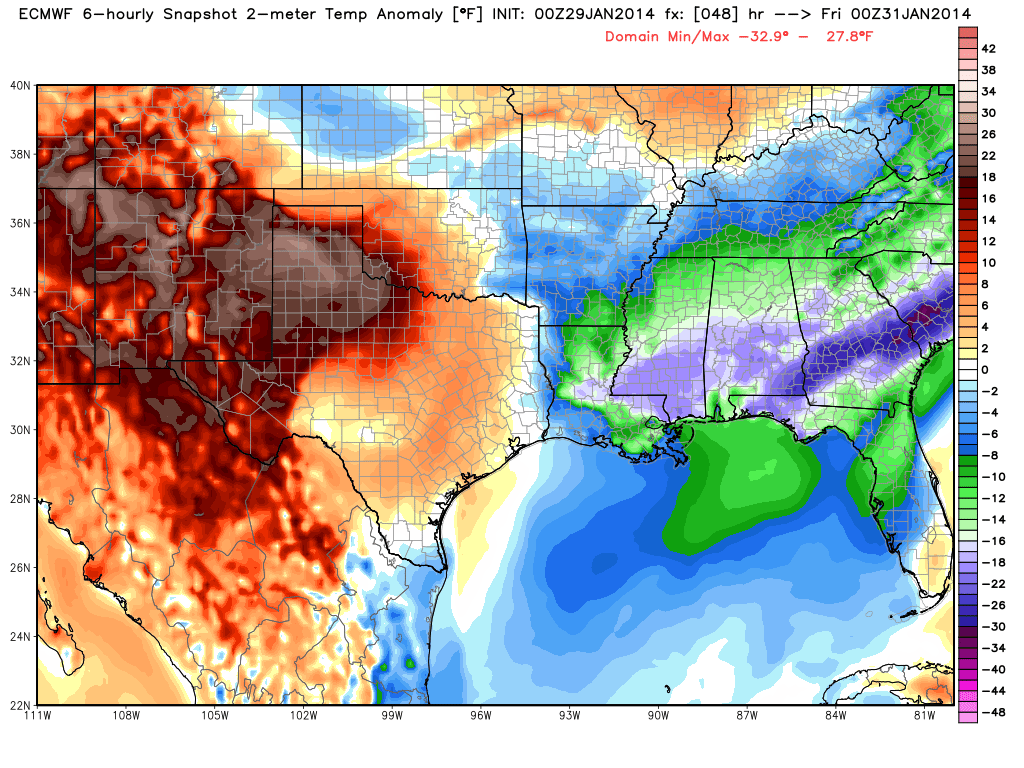 Arctic air continues its grip over southeastern New Mexico and west Texas this morning with local temperatures in the single digits and teens. We will climb up out of the deep freeze this afternoon with our forecast high temps expected to be in the mid-upper 50's. This warming trend will escalate on Thursday with our high temperatures across southeastern New Mexico ranging from the upper 70's to the low 80's.  Friday will see highs in the mid-upper 70's. These temperatures will average some 15 to 20-degrees above normal for the end of January. This Morning's/7 AM MST BUFKIT Forecast.
For Carlsbad, New Mexico.

A High Wind Watch is in effect for the Guadalupe Mountains from Thursday morning through Friday afternoon for southwesterly-westerly  winds that will be sustained at around 35-45 mph with gusts near near 65 mph.

A High Wind Watch is also in effect for Lincoln County for late tonight into Thursday evening for westerly winds sustained at around 40-45 mph with gusts near 65 mph.

A Fire Weather Watch is also in effect for Thursday across southeastern New Mexico and west Texas for Critically Dangerous Fire Weather Conditions. Simply put please avoid any type of outdoor activity that involves the use of sparks or flame! Any wildfire that may develop will have the ability to rapidly spread and grow in the very dry conditions and high winds.

Areas of blowing dust will also develop across the area especially during the higher wind gusts. Normally dust prone locations such as open, exposed, or freshly plowed fields and farmlands, and construction sites will likely see localized visibilities drop down to less than one mile at times.

Another potential hazards (as crazy as it sounds) will be tumbling tumbleweeds. Sounds like a joke right? Id bet the folks in Clovis, New Mexico aren't laughing. Check out these photos if you haven't seen them already. Combine dense piles of these weeds along with tender dry conditions, high winds, and you have a potentially explosive fire weather situation. Trust me its no laughing matter for those affected! 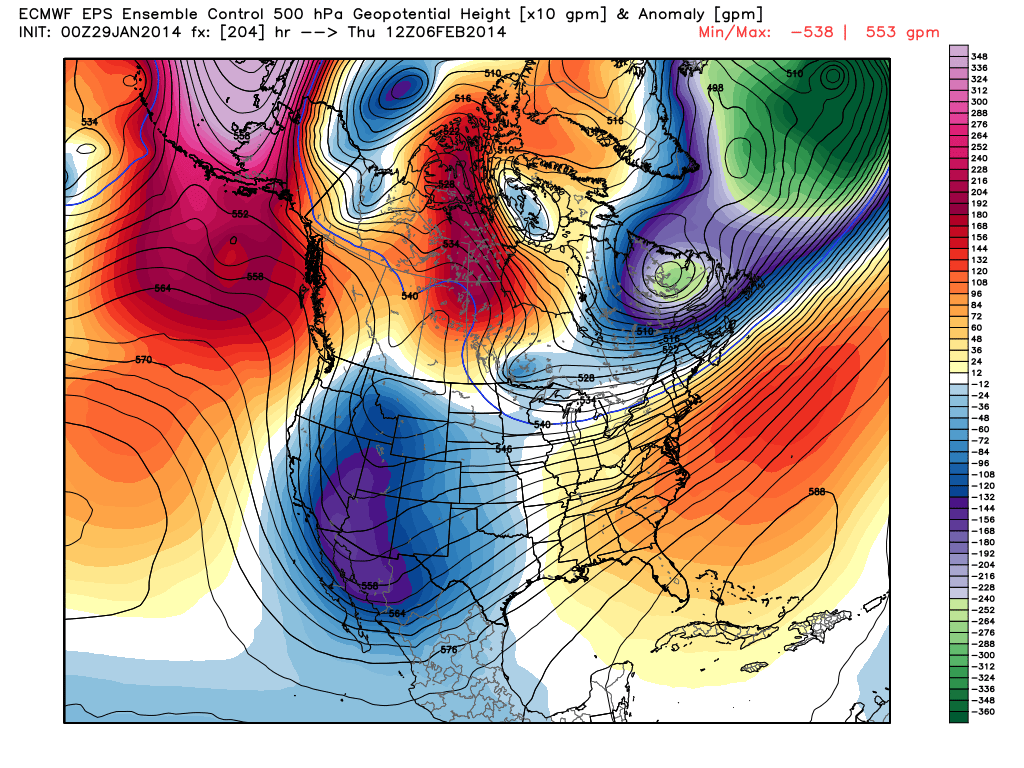 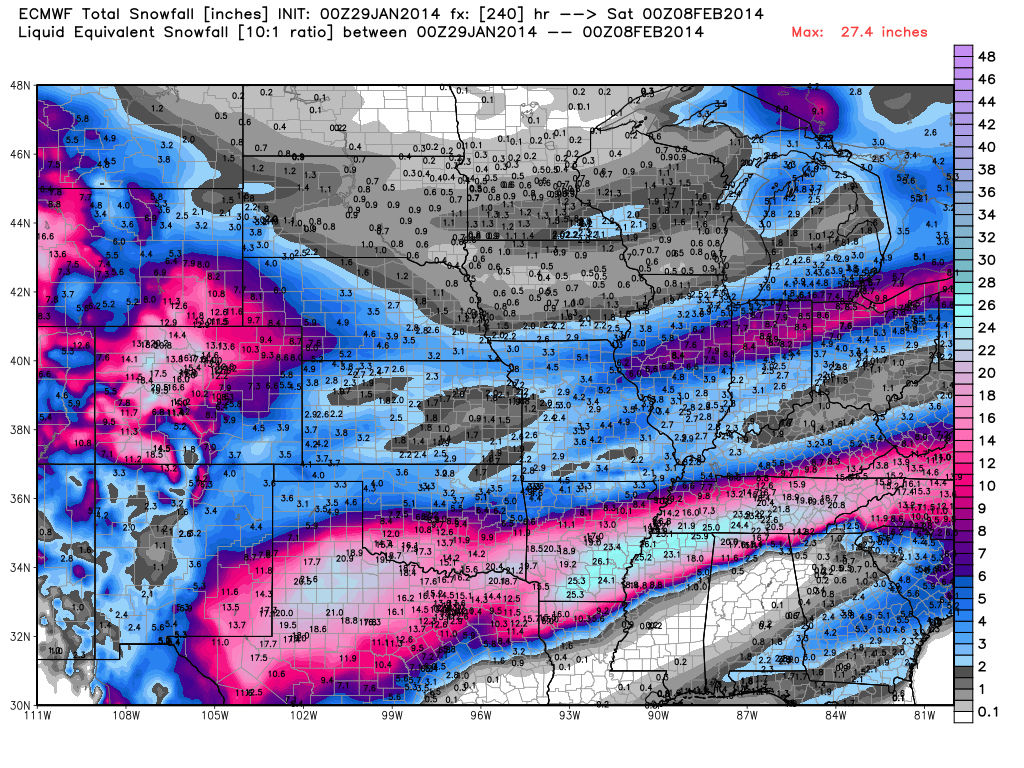 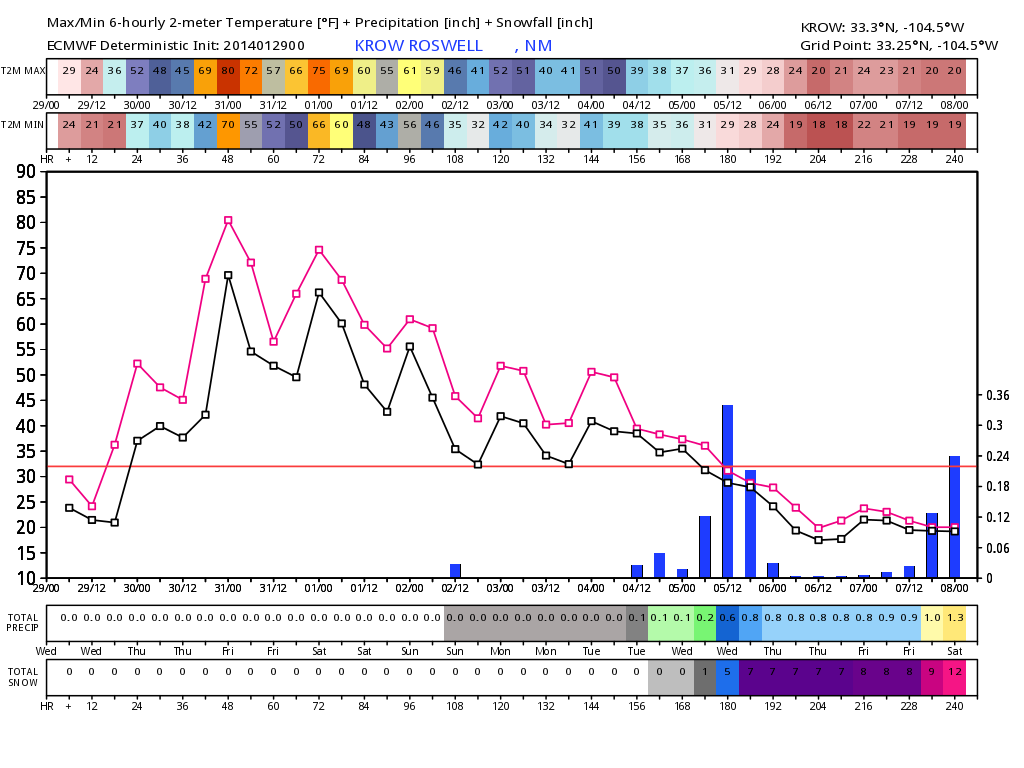 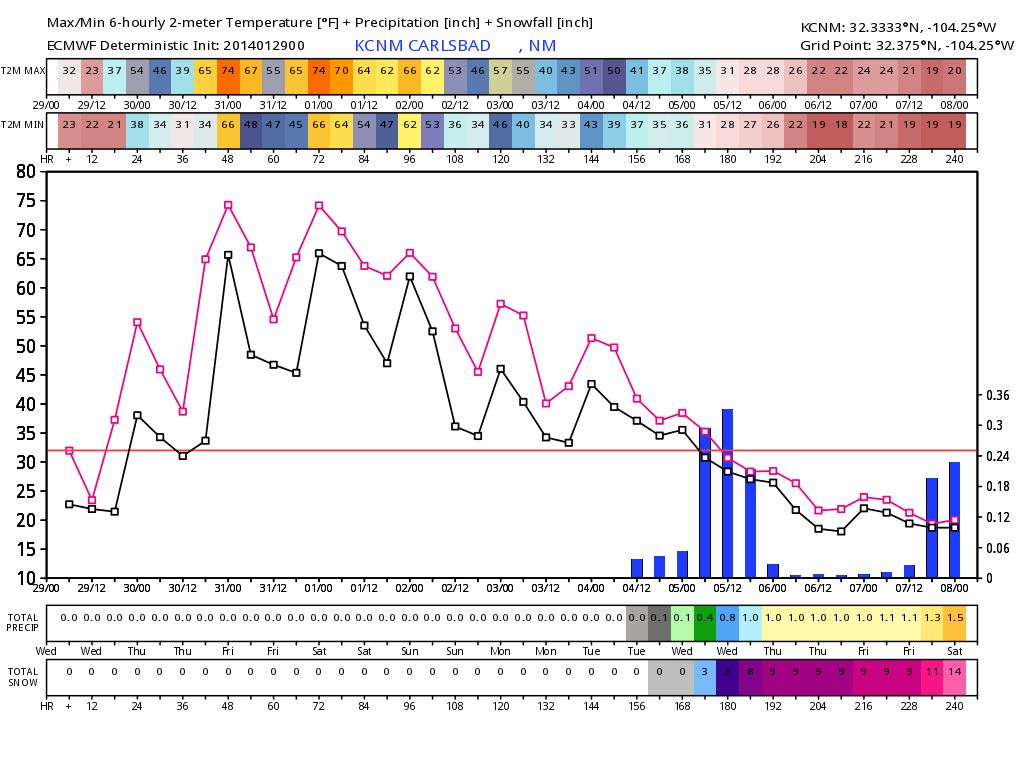 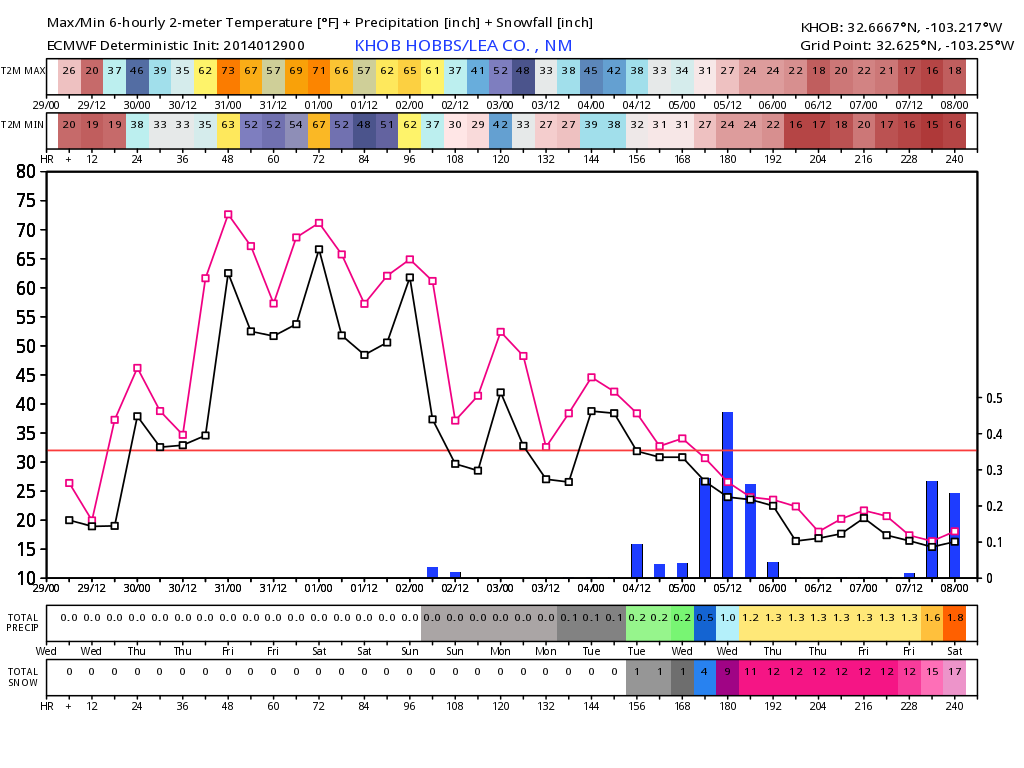 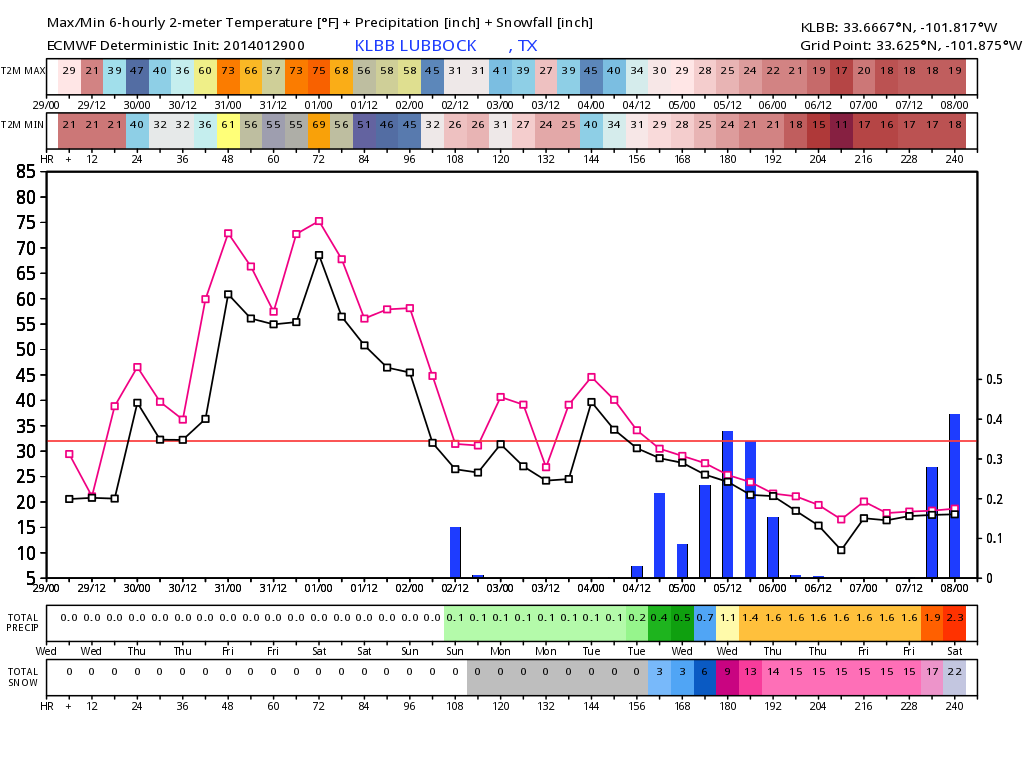 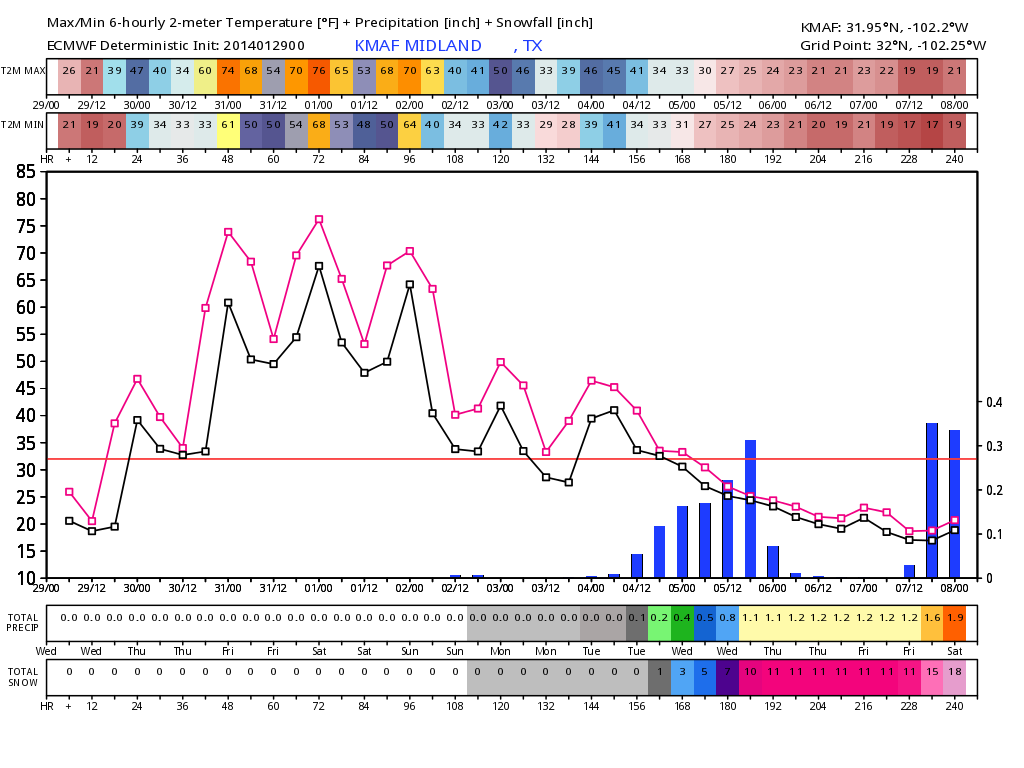 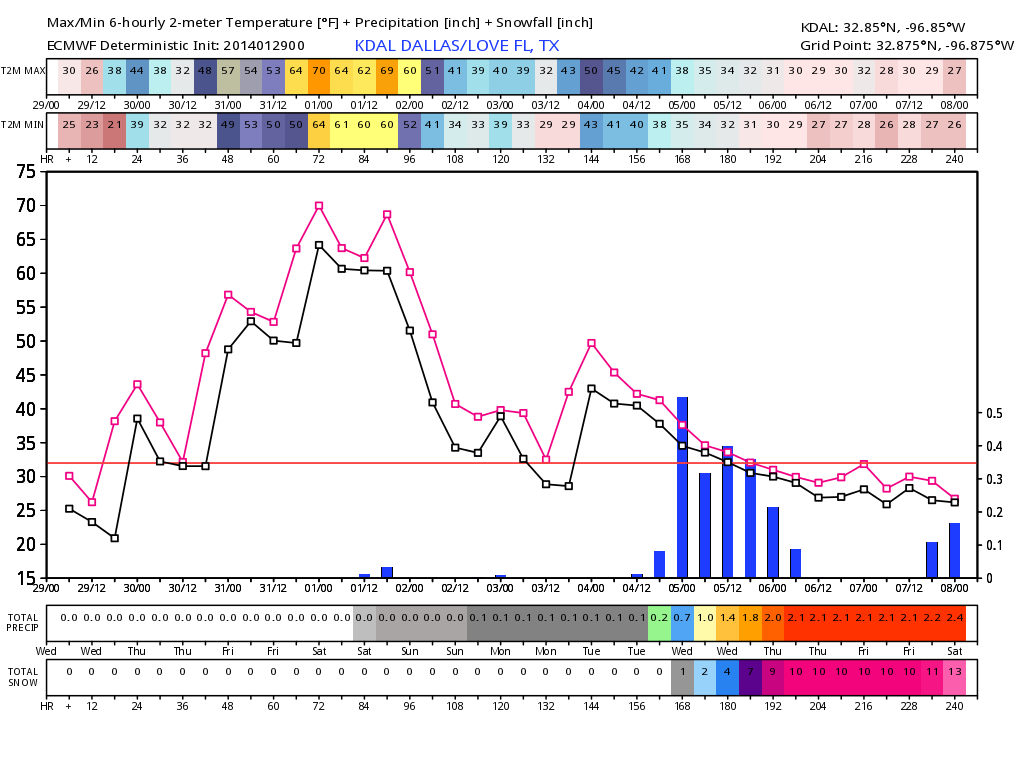 I was floored when I looked at last nights 00Z/5 PM MST run of the European (ECMWF) forecast model. This particular run of this model is forecasting a foot or more of snow from southeastern New Mexico northeastward to at least the Dallas/Fort Worth area in about ten days. Take this with one huge grain of salt.

Specifically Roswell 11.6", Artesia 13.5", Carlsbad 13.7", Hobbs 17.3", Lubbock 22", and DFW 13". This one simply left me speechless for awhile. But...there is always a "but", we are talking about a storm that hasn't formed yet, and one that may or may not form, and if it does its still ten days away! And if it does form as this model is forecasting, will it actually produce this type of historic widespread heavy snowfall...the odds are in favor of no! But...there it is again, if this happens, then I will be saying "Hey Ma Look...Pigs Can Fly." 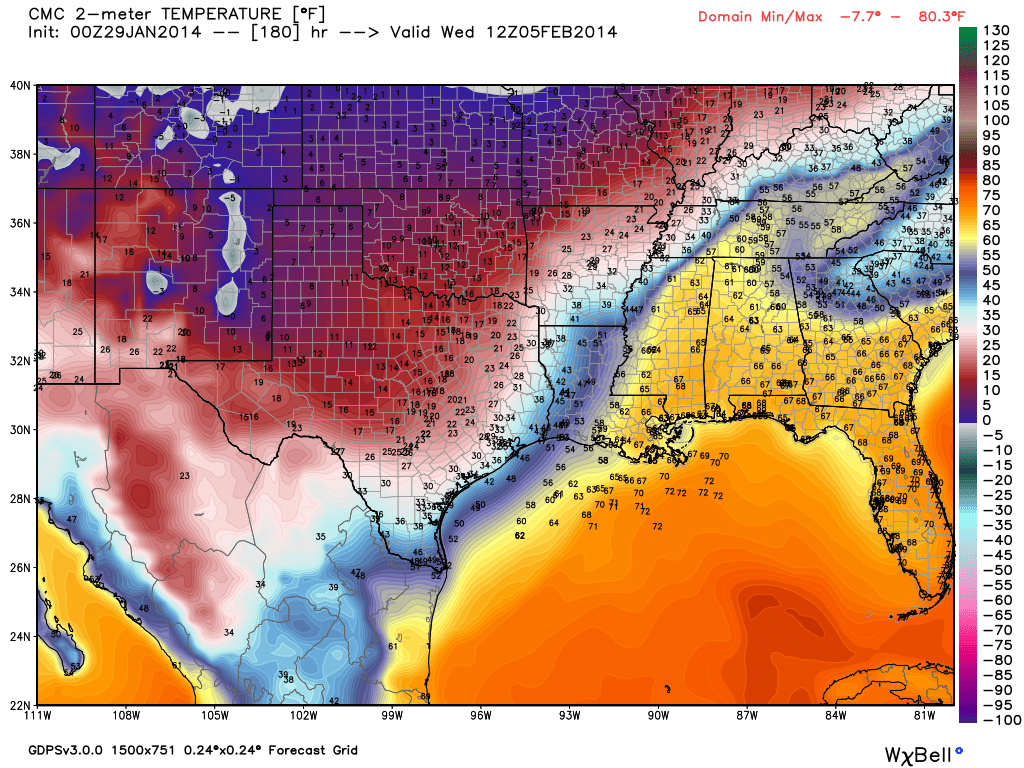 Last nights 00Z/5 PM MST run of the Canadian model is forecasting another strong shot of arctic air into the area again by around next Tuesday. Check out its forecast (map above) of lows in the single digits and teens for southeastern New Mexico...even a few below zero readings by next Wednesday. 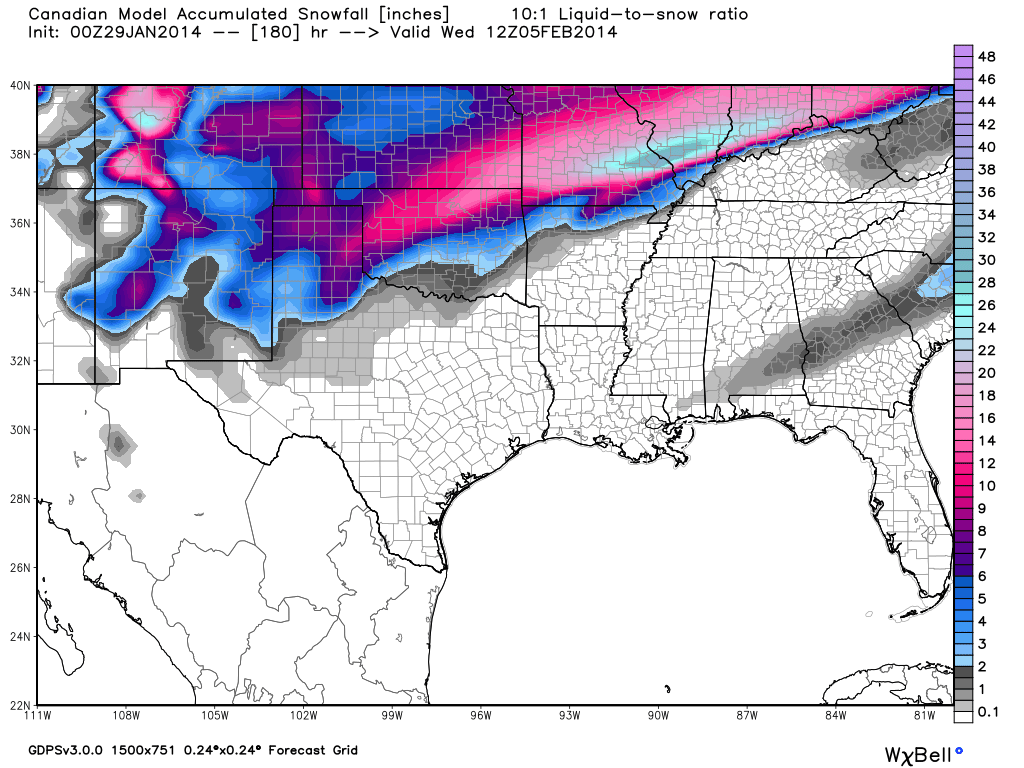 
What is becoming more certain with time is that a pattern change will be coming starting late this week. Long-range models point to more arctic invasions and perhaps an increase in the storm activity across New Mexico and nearby areas over the next couple of weeks. February looks like it will start off with a bang.

My Web Page Is Best Viewed With Google Chrome.
on January 29, 2014
Posted by Wendell Malone