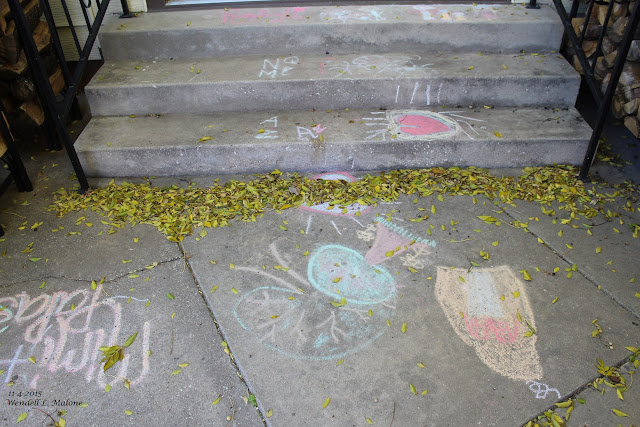 Get ready for changes in our local weather. This in spite of the fact that the Carlsbad airport has reached a high temp of at least 80°F so far this afternoon. I've managed to get up to 81°F here at our home in town. Our first freeze/frost of the season will occur late Thursday night into early Friday morning. Ski Apache is going to get some more snow too.

At 2 PM MST this afternoon a huge contrast in weather was occurring in New Mexico. Gallup located near the Four Corners area of northwestern New Mexico was reporting a temp of 36°F, a wind chill temp of 23°F, with light snow falling.

Meanwhile Carlsbad located in the far southeastern corner of the state was reporting a temp of 81°F under sunny skies. A cold front was dissecting the state in just about in half at this time and will continue to push eastward into the eastern one half of the state tonight. Much colder temperatures will accompany the front passage along with windy conditions.

In fact the Midland National Weather Service Office has issued a High Wind Warning for the Guadalupe mountains of southeastern New Mexico and West Texas. This warning will be in effect from 8 AM MST - 5 PM MST Thursday. Southwesterly winds are forecast to increase to sustained speeds of 45 mph with gusts near 65 mph...especially through the Guadalupe Pass area and over the higher ridge tops and peaks.

Colder Temperatures Are On The Way. 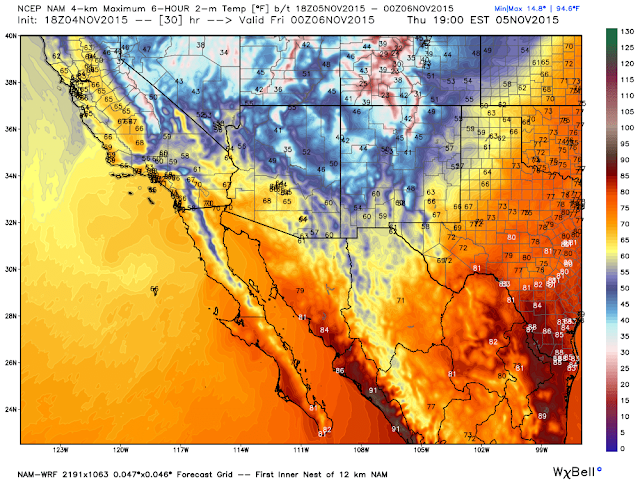 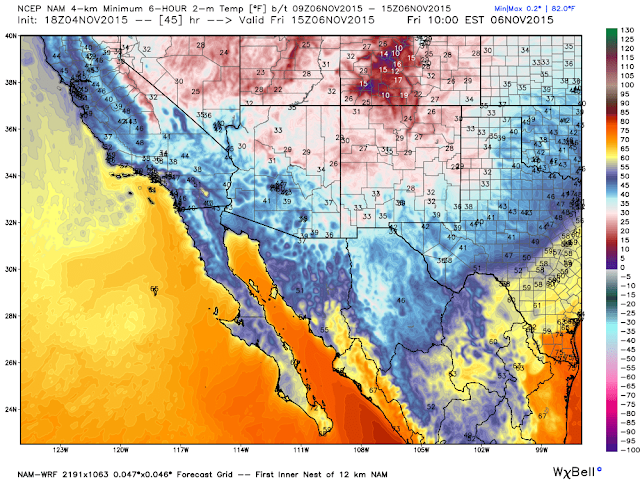 As the cold front pushes east into Texas on Thursday a colder airmass will settle in over the local area. Our high temperatures on Thursday will be mostly in the 60's across the southeastern plains. With clear skies, light winds, a drier airmass in place, and excellent radiational cooling taking place most of us will likely see our first frost/freeze of the season Friday morning. Forecast low temps will range from the mid 20's in the higher mountain valley locations to near 32°F in the lower elevations of the southeastern plains.

A second surge of cold air will arrive on Saturday keeping our daytime highs down in the 50's. A few snow showers may occur over the higher elevations of the Sacramento mountains late this afternoon into tonight but overall only light totals, if any, are forecast. The exception to this of course will be Ski Apache which may pick up 1" - 3" of snow. The models are hinting at a weaker system possibly affecting the area on Saturday with light higher mountain snows and perhaps some light rain showers here across the plains.

The Truth Is Stranger Than Fiction!
at Wednesday, November 04, 2015