Great Weather Until Thanksgiving - Then Its All Downhill. 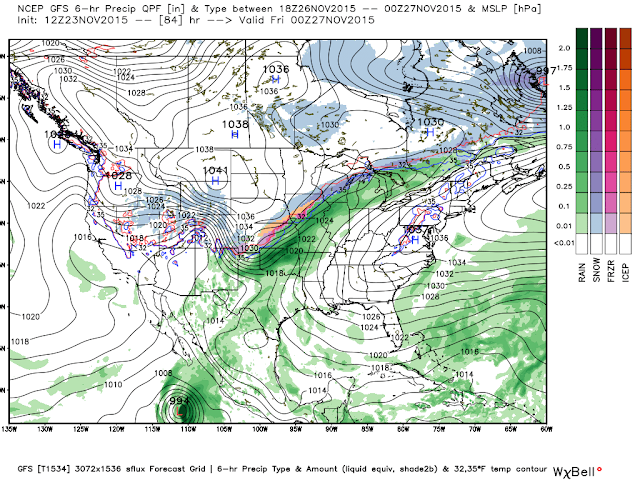 What happens when you mix a potent closed 500 millibar low with arctic air, subtropical moisture streaming over the top of this arctic air, courtesy of a potential Tropical Storm (Sandra), and a holiday weekend? Trouble and big travel headaches. But where will be the question. 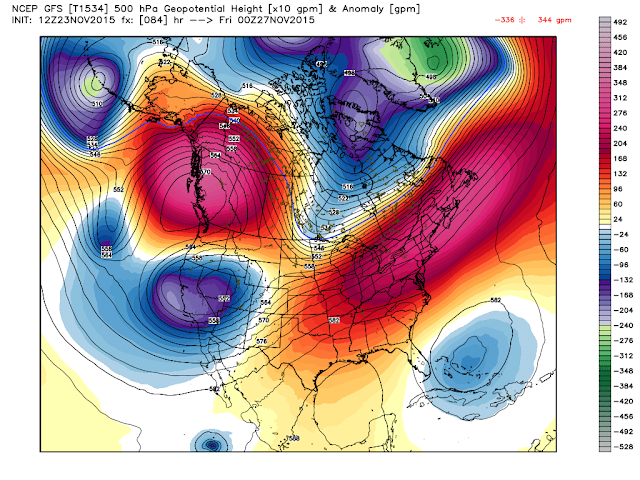 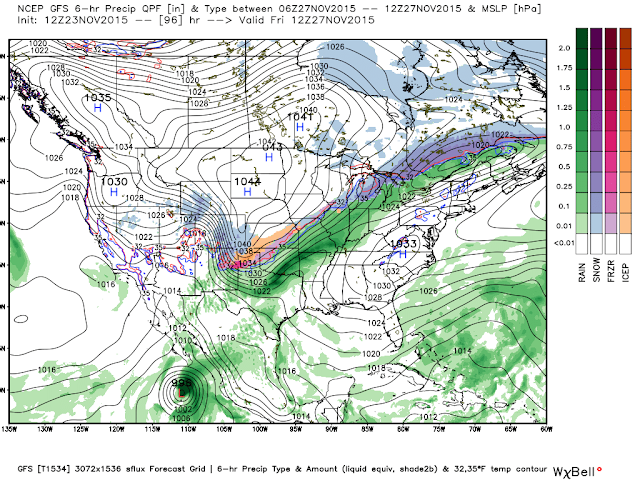 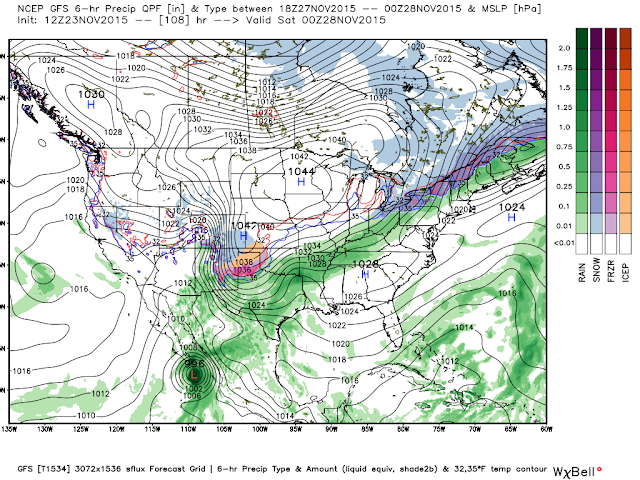 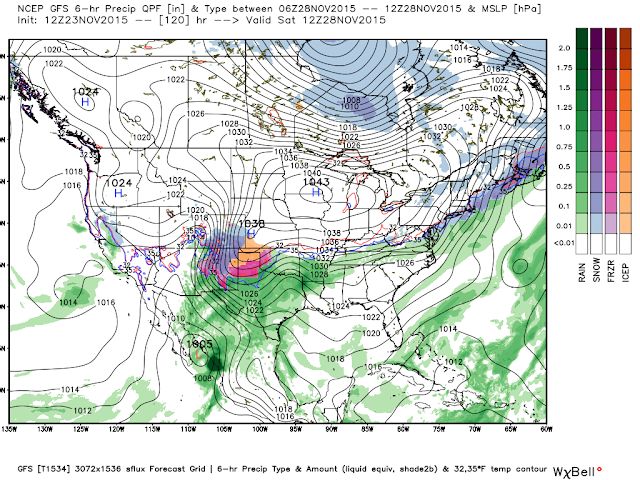 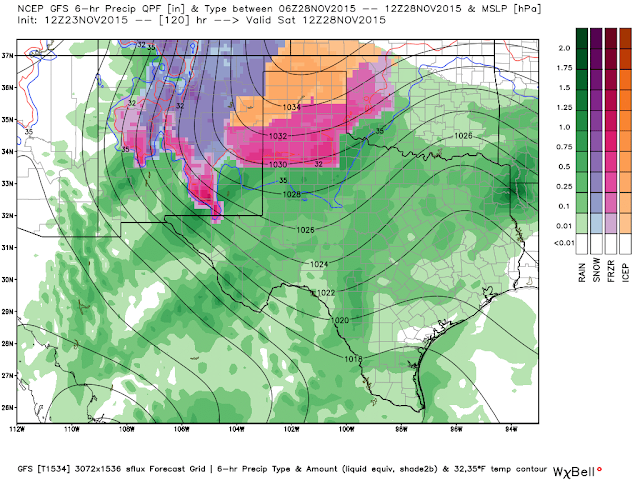 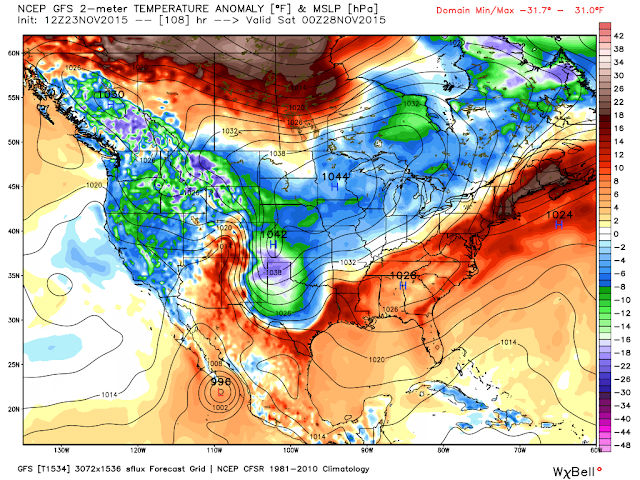 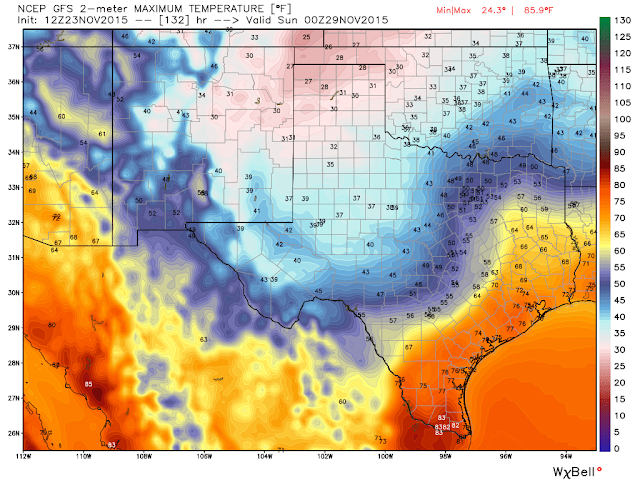 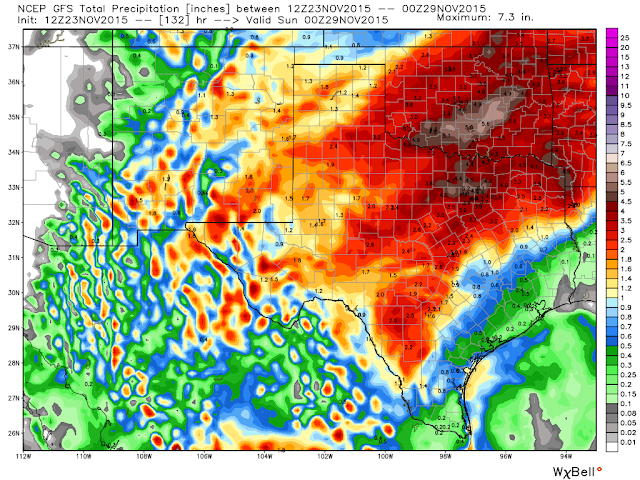 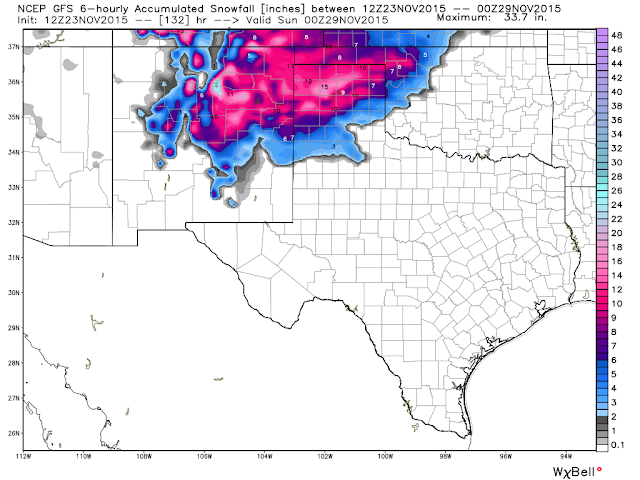 Mild weather will prevail today across much of the area with afternoon highs in southeastern New Mexico mostly in the 60's at the lower elevations. Tuesday and Wednesday will be about ten degrees warmer with highs in the 70's. Although these readings will be warm for late November they won't even be close to the record highs for the date. Consider the following: 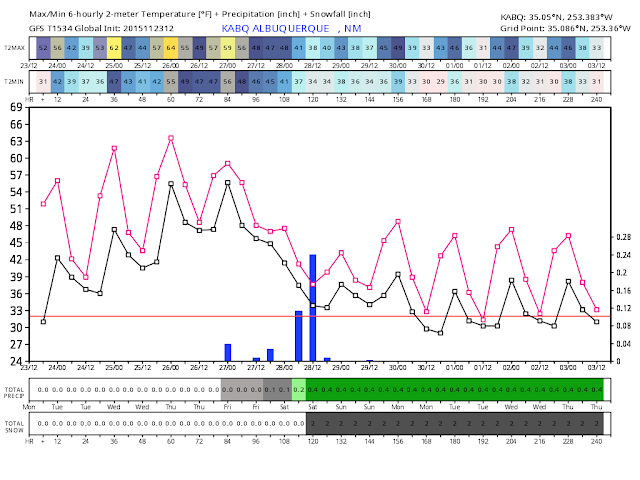 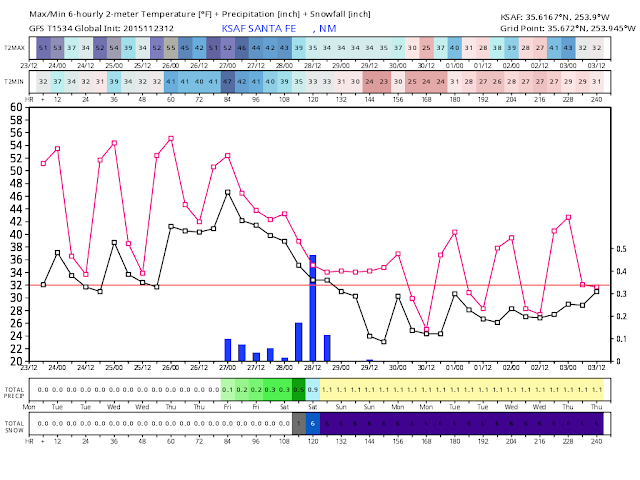 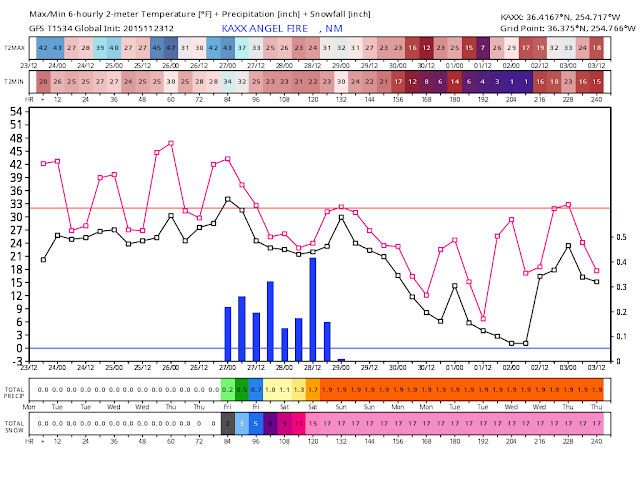 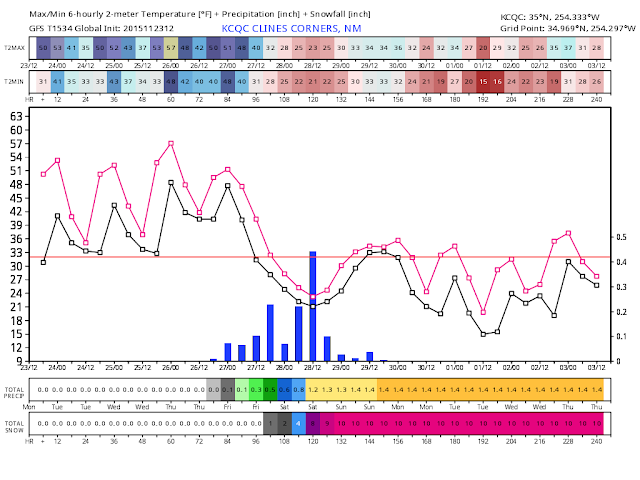 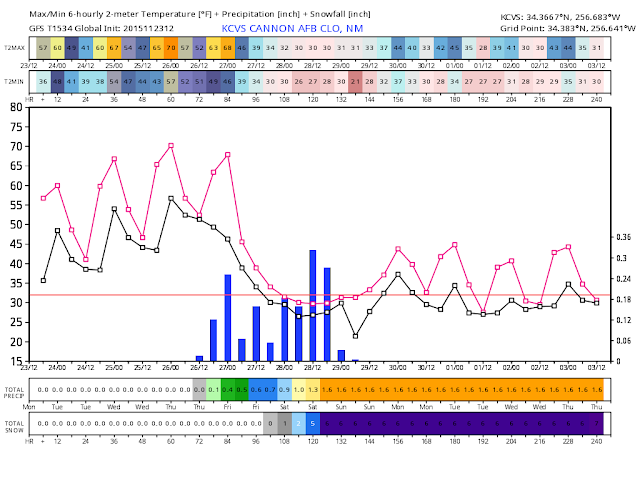 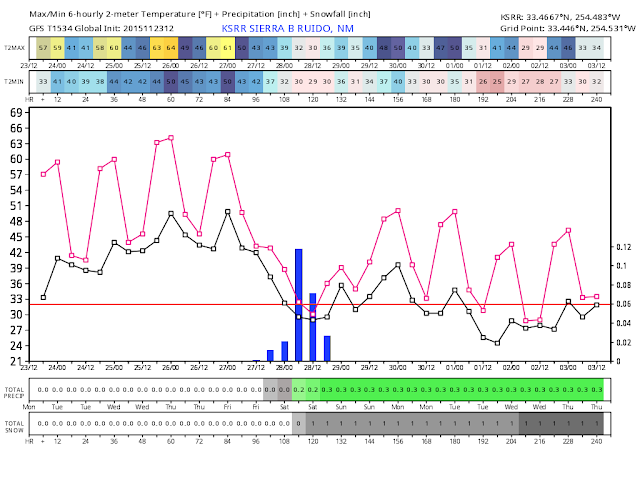 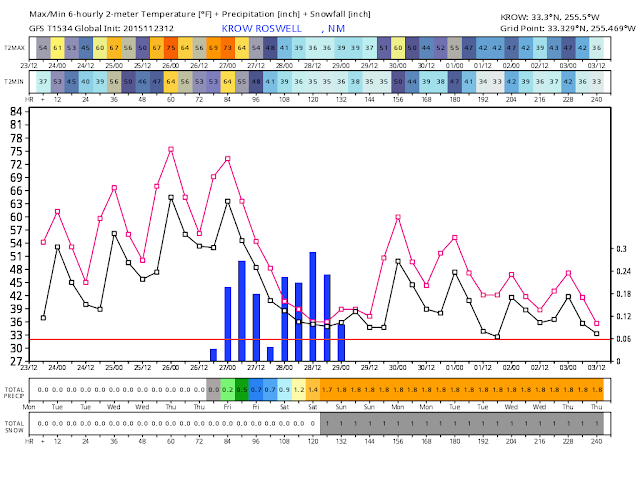 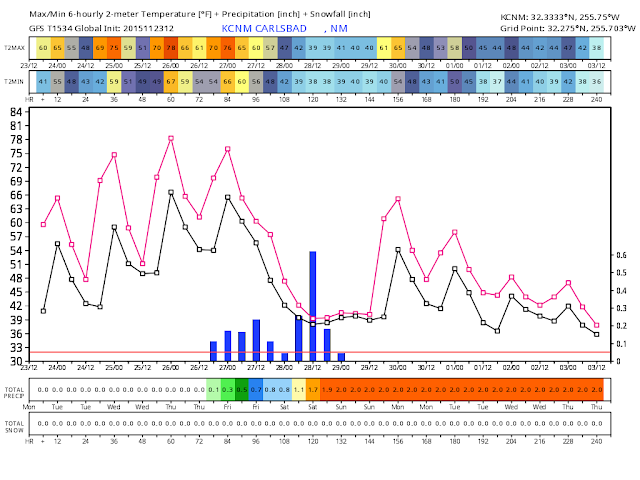 Model mayhem continues this morning. A potent mid-upper level closed low will sink into the Great Basin by Wednesday. Where it goes after that especially as we head into the weekend is not clear. This of course will be a huge factor in determining just what impacts this winter storm will have on New Mexico and surrounding areas.

Added to this complicated mess will be a strong arctic cold front sinking southward into the eastern one half of the state Thanksgiving afternoon and evening. As if this wasn't enough we are also looking at the possibility of Tropical Storm Sandra forming this week, well south of the southern tip of Baja, Mexico. The models are signaling that abundant subtropical moisture from Sandra may very well get pulled northward into the state, and override the the arctic air at the surface. Perfect recipe for a traveler's nightmare and a skiers dream.

Nothing is for sure yet folks so take the above forecast maps and charts with a giant grain of salt. Until the models settle down and give better signals as to the storms track and timing much of the above forecasts could, and will likely change. There is however the potential for a strong, very wet, and cold winter storm to affect much of the area Wednesday into the weekend. Travel in these areas may become a problem.

Lets just throw everything in the soup bowl shall we and call for the following:

Thunderstorms, rain, some of which may be heavy (especially over parts of Oklahoma and Texas, freezing rain, sleet, and snow which could be heavy in many locals. And or a mix of all of the above in some locals. We could be looking at an ice storm from the eastern plains of New Mexico eastward and northeastward into the Texas Panhandle and south plains late this week. Heavy snow may also fall in these areas depending upon the storms track. Many of New Mexico's mountains could end up with heavy snow including the Sacramento, Capitan, and Guadalupe's. A mix will be possible in southeastern New Mexico.

Check out these links for the latest National Weather Service forecasts, watches, warnings, advisories, and special weather statements in your area of interest, and local road conditions.

The Truth Is Stranger Than Fiction!
on November 23, 2015
Posted by Wendell Malone