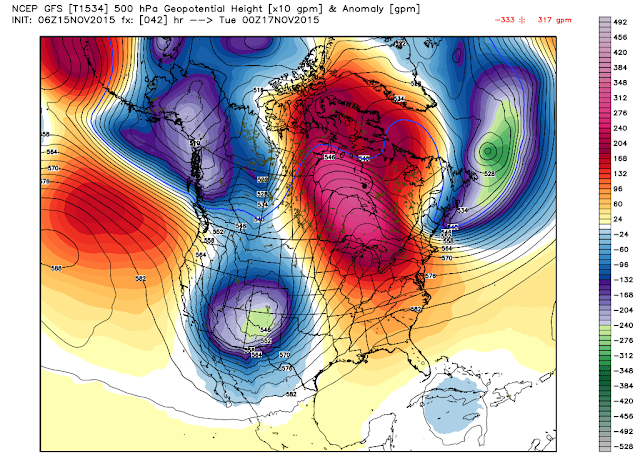 A powerful winter storm developing along the Pacific Northwest Coast early this morning will continue to dive southeastward today into Monday. The storm will be located over central California by sunset today, northwestern Arizona by sunrise Monday, and over northern New Mexico and southern Colorado by sunset Monday. 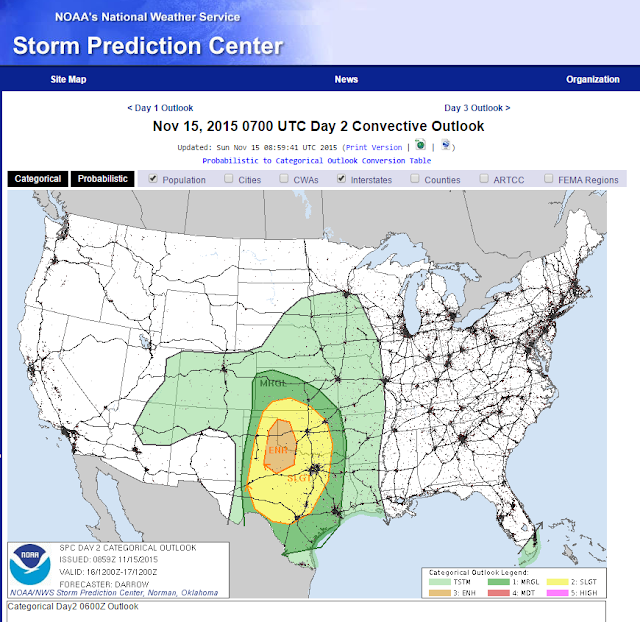 A weak disturbance riding the subtropical jet stream will move over the area later today into tonight. This will kick off scattered rain showers and a few thunderstorms across southern, southeastern New Mexico, and West Texas. As the stronger and colder mid-upper level storm approaching from the west arrives on Monday severe thunderstorms are forecast to break out from West Texas northward into Kansas. Supercell thunderstorms will be capable of producing large hail, damaging thunderstorm wind gusts in excess of 60 mph, deadly frequent cloud to ground lighting, and a few tornadoes in the areas shaded in orange and yellow above on Monday. 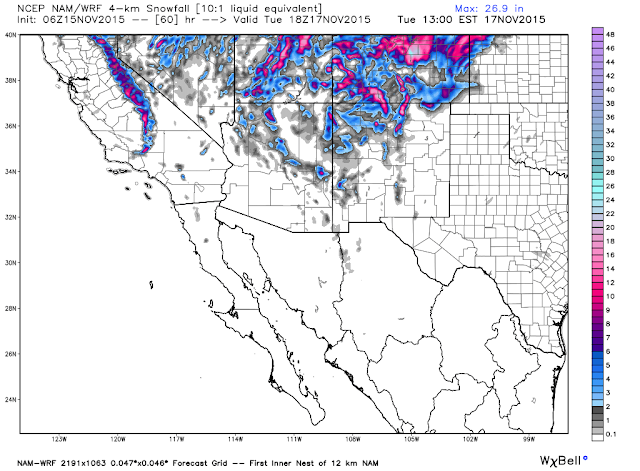 Heavy wind driven snow will fall across northern Arizona, northern and northeastern New Mexico and Colorado. Storm total total snowfall amounts across the San Juan and Sangre De Cristo mountains of northern New Mexico may be measured in feet in some locals. A Winter Storm Watch is in effect for these areas.

Scattered rain showers and a few thunderstorms will dot the landscape locally today into tonight. Our chances for measurable rainfall are generally in the 40% to 70% range. A few inches of snow will likely fall in the Sacramento mountains with more than this possible at the highest elevations.

As the storm to our north rapidly deepens and strengthens on Monday it will generate strong to high winds across most of the area. Southwest winds are forecast to become sustained at 40-50 mph with gusts near 75 mph in the Guadalupe mountains Monday morning into Tuesday morning. A High Wind Watch has been issued.

Southwesterly to westerly winds will increase over the lower elevations of the area Monday morning and will become sustained at at around 30-40 mph with gusts near 45-55 mph. A strong cold front will sweep eastward across the area on Monday. A colder airmass will settle in behind it. Highs today and Monday in the southeastern plains will be in the 60's which will drop down into the 50's on Tuesday.

The Truth Is Stranger Than Fiction!
at Sunday, November 15, 2015