If The European Model Is Correct...Major Snowstorm New Years Week!

Forecast Positions Of The Upper-Level Storm.
(ECMWF Or European Model.) 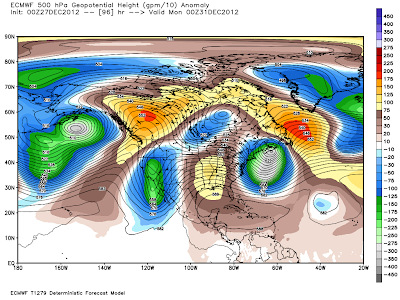 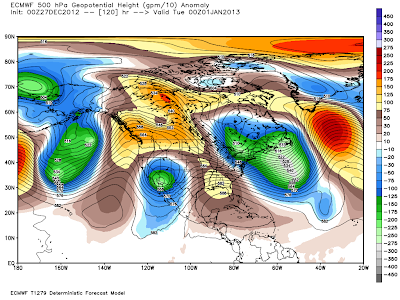 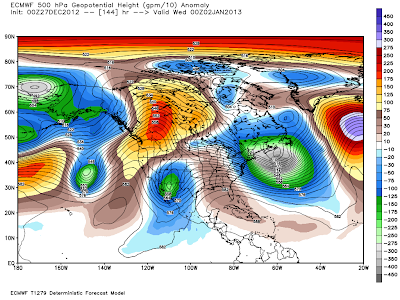 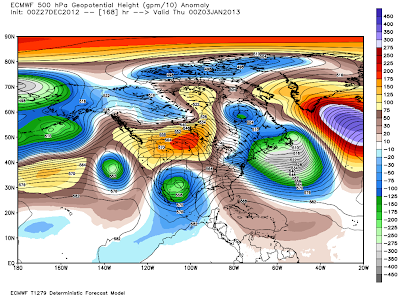 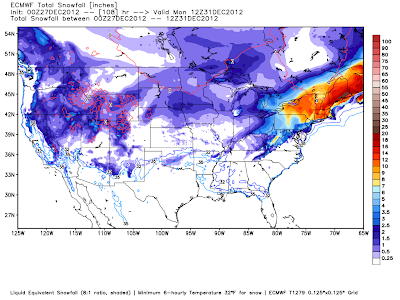 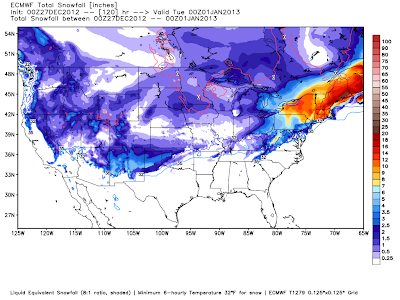 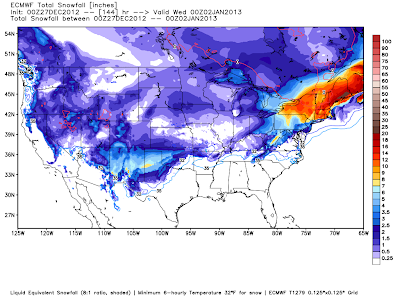 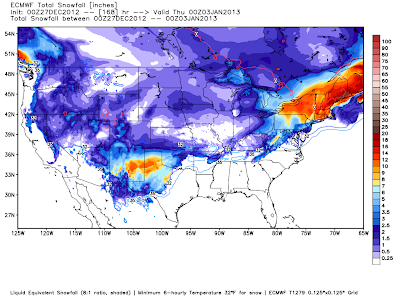 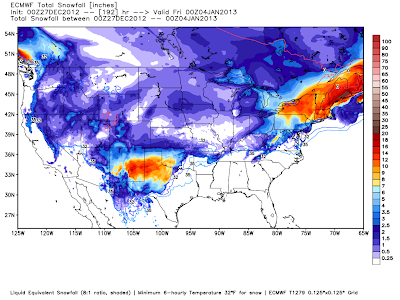 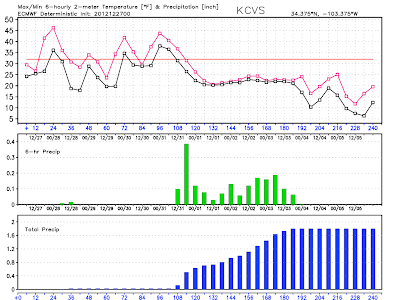 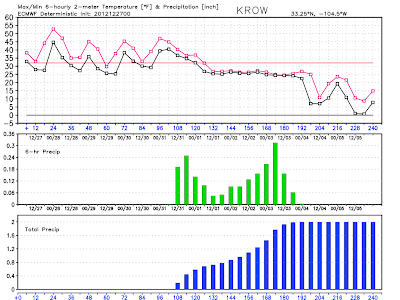 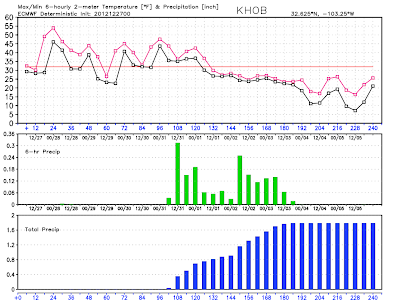 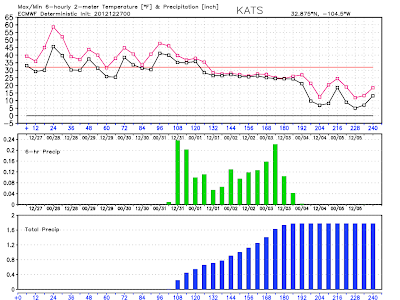 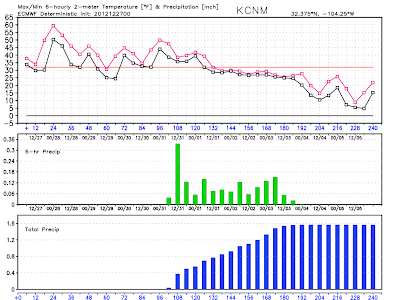 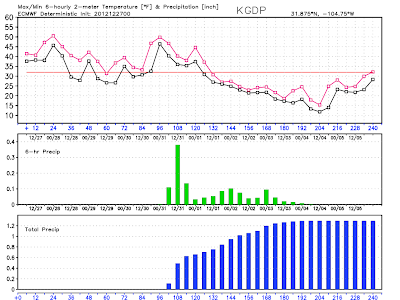 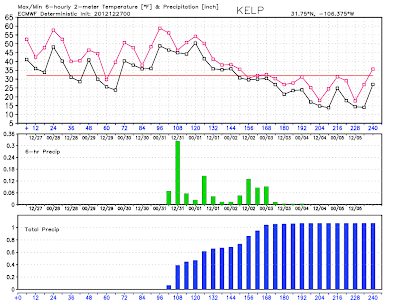 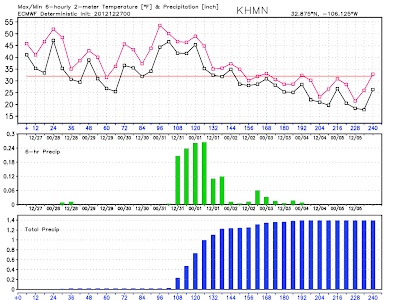 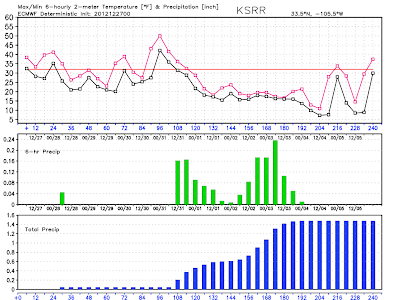 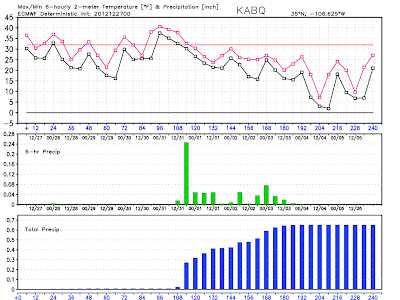 (A note on the timeline on the graphs above)-

The blue plus sign is the initiation time of the models forecast (00Z/5 PM MST on Dec 26th). The blue numbers at the bottom of the graphs (12,24,48,72,etc) are the forecast hours from the iniation time. So these graphs are forecasting high and low temperatures, and total liquid precipitation through 240 hours, or the next 10 days.

Also note with temperatures below freezing, and your location if forecast to receive 1.00" to 2.00" of rainfall...then this would mean that the precipitation would not be rain, it would be snow. Using the standard 10 to 1 ratio for snowfall totals, you would be looking at 10" to 20" of snowfall.

Given last weeks lousy performance of the models (GFS, ECMWF, CMC) and especially the European (ECMWF), its a little hard to swallow this models forecast of a monster of a snowstorm for the state beginning around New Years Eve. However, for now anyway, this model is sticking to its guns. Last nights run has sped up the arrival time of the deep cut off upper-level low into the area, and is bringing it a little further to the north, and east quicker than earlier runs.

As bad as the ECMWF was last week, the U.S. GFS model was just about as bad, its hard for me to want to pay too much attention to its (the GFS model) forecast just yet, so I'm not including it in this blog update. The GFS model brings more of an open trough across the state and sweeps it eastward much faster than the European model. So why am I using the ECMWF models forecasts if its been so bad so far this winter? Because it usually does better with winter storms than the U.S. GFS model, and overall has a better track record.

Historically cutoff lows this deep (as depicted by the ECMWF above) that take a track similar to this forecast, just clobber the area with lots of snow. I don't want to jump the gun on this storm just yet. I'm sprinkling all of this with one huge grain of salt. But I must admit that should this models forecast pan out...then we may see one whopper of a snowstorm over the area next week.
This one could even potentially be one for the history books...if enough cold air gets locked into the area, if enough sub-tropical moisture gets pulled into the system from the Eastern Pacific. And finally, if this particular forecast model is right. Lots of "if's" yet so keep checking back.

Thanks for stopping by. :)

My Web Page Is Best Viewed With Google Chrome.
on December 27, 2012
Posted by Wendell Malone