Cold Into Wednesday With Snow Possible. 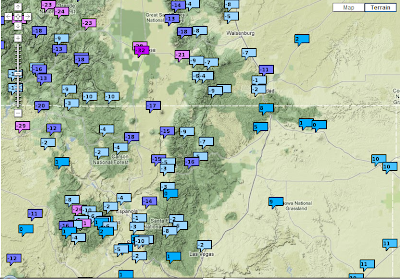 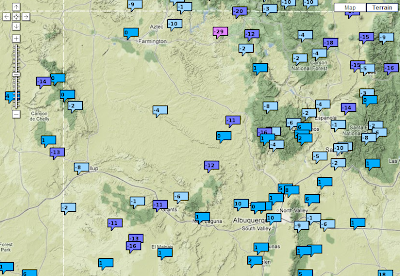 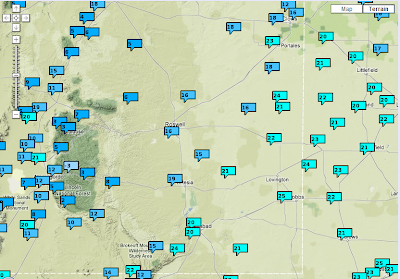 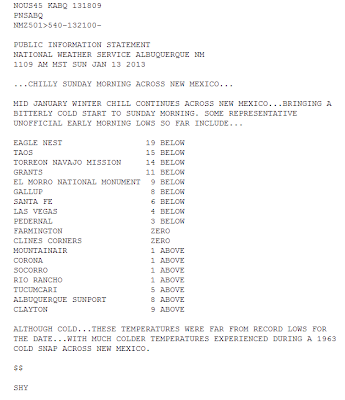 It was seasonably chilly in southeastern New Mexico this morning but nothing that was any where near setting new record lows for the date. My low temp here at my home in Carlsbad was 20. 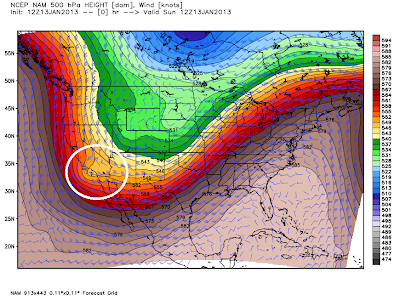 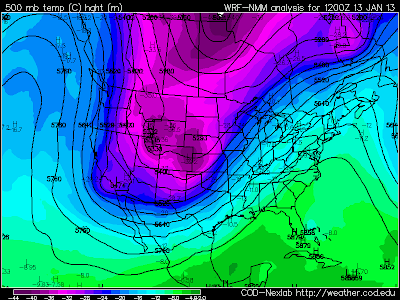 Cold air continues to funnel into New Mexico from the north and this will continue into the middle of the upcoming week. A cold mid-upper level trough of low pressure extending southward out of Canada and into northern Mexico is responsible for this invasion of colder air.

A minor disturbance located over southern California this morning (circled in white above) will move across the state today into tomorrow morning. This may give us a shot at some light snow tonight into tomorrow morning in southeastern New Mexico. At this time significant snowfall accumulations are not anticipated. 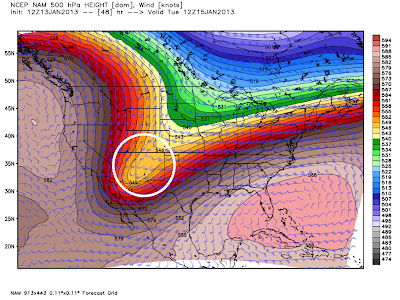 A stronger disturbance will start breaking off from the jet stream over the Four Corners Region by sunrise Tuesday, and then dig south into northwestern Mexico. 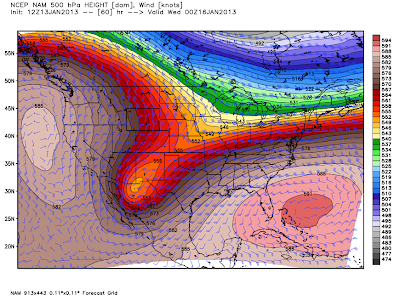 A cutoff low is forecast to be in formation over the boot-heel area of southwestern New Mexico by around sunset Tuesday evening. 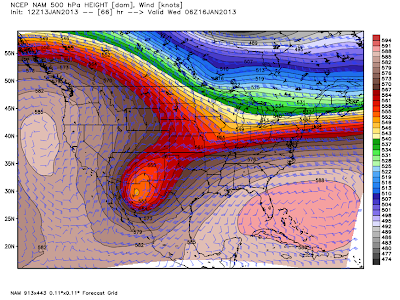 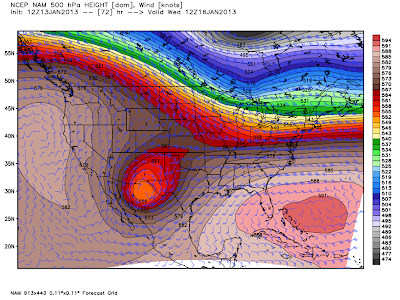 By 5 AM MST Wednesday.

By sunrise Wednesday morning the NAM is forecasting another strong cutoff mid-upper level low to be located southwest of El Paso over northwestern Mexico. This strong cutoff low is forecast to drift eastward to near Pecos, Texas by sunset Wednesday, at least according to this mornings NAM model forecasts. As a reminder when dealing with cutoff upper level lows (cut off from the main jet stream flow to their north) please remember that these storms can be problematic when trying to forecast their eventual track. Last weeks cutoff upper level low went further south than forecast, therefore we missed the heaviest of its precipitation here in southeastern New Mexico, and got rain instead of snow. 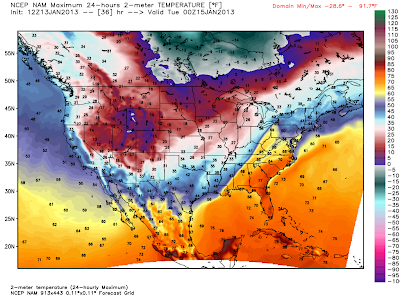 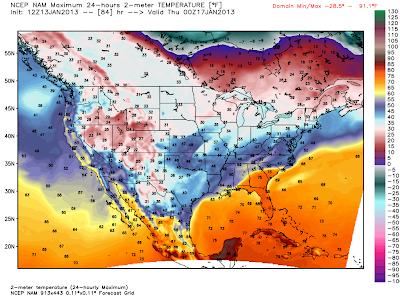 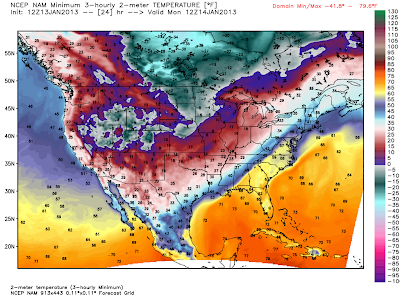 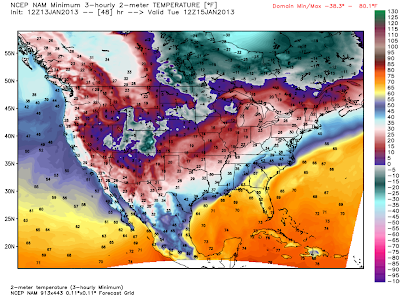 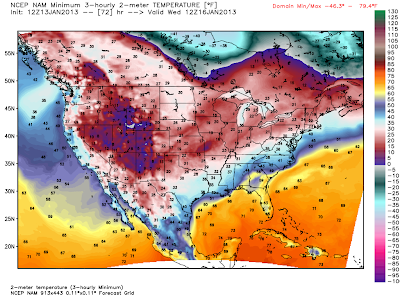 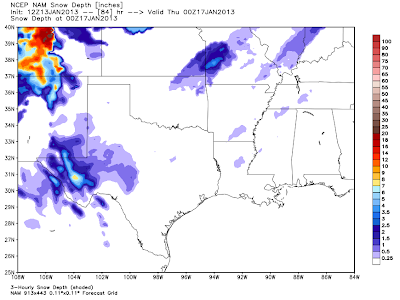 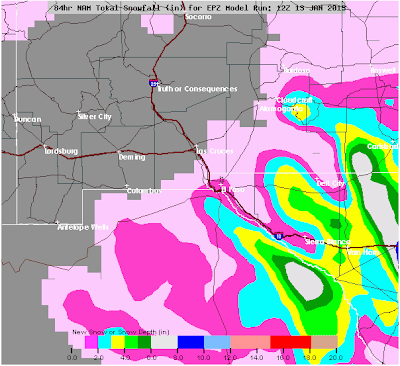 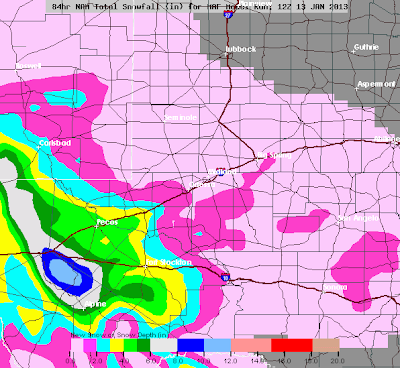 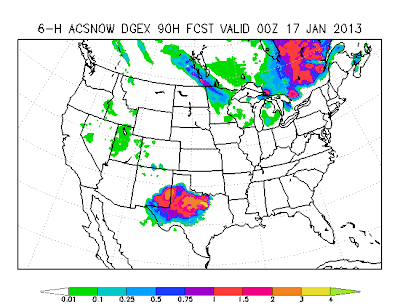 With our temperatures forecast to remain in the thirties during the daytime, and the teens and twenties at night, from today into Wednesday, there should be little doubt that winter rules our local weather. Add to this misery the possibility of accumulating snowfall once again from Tuesday into Wednesday. We will get a break from the cold late next week into the weekend, but trouble lurks on the horizon. Potentially even colder temps than what we will experience this week may be arriving next week. 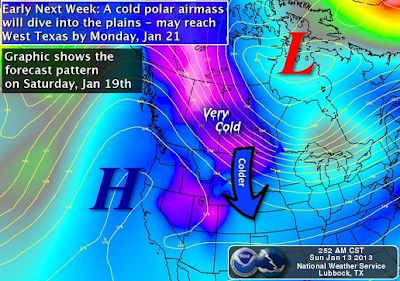 An outbreak of bitterly a bitterly cold Polar air mass is still forecast to enter the area by next week. The details about this event are not very clear at this time. However there is a lot of talk in the weather world of this potentially being some of the coldest air to enter the U.S. east of the Rockies since the 1990's. More on this later.

My Web Page Is Best Viewed With Google Chrome.
on January 13, 2013
Posted by Wendell Malone