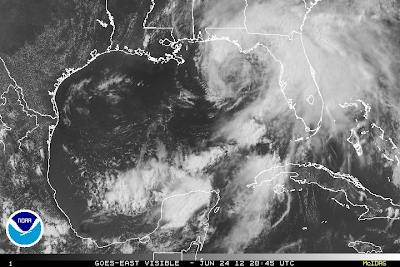 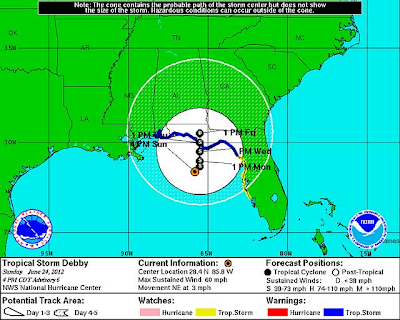 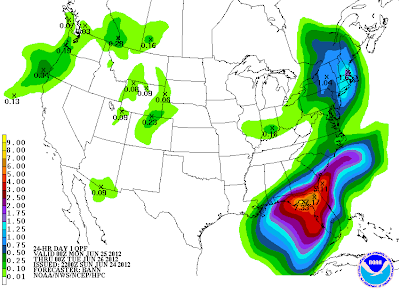 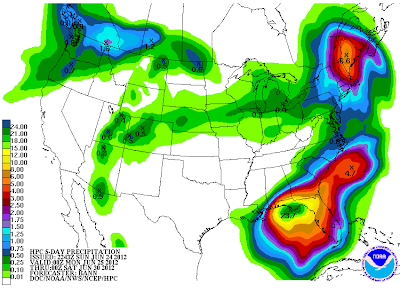 What happens when you have a slow moving Tropical Storm (Debby) meandering around in the Gulf of Mexico. Rain, and lots of it. Up to 5" - 9" is forecast to fall over parts of the Florida panhandle over the next 24 hours, and over the next five days, upwards of around 24". 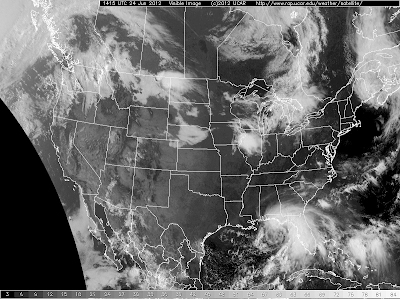 US Visible Satellite Image At 8:15 AM MDT. 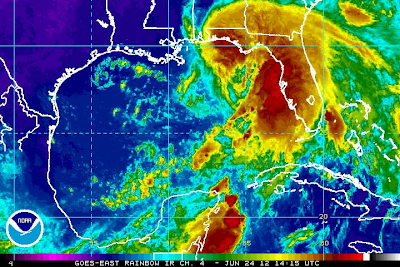 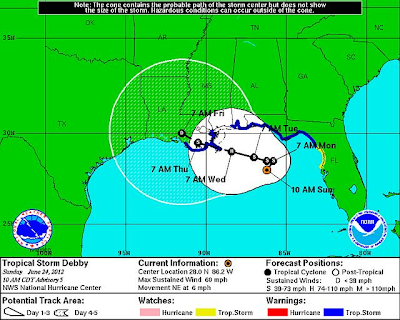 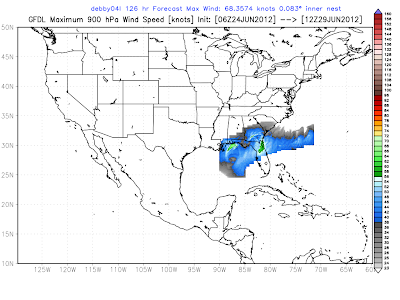 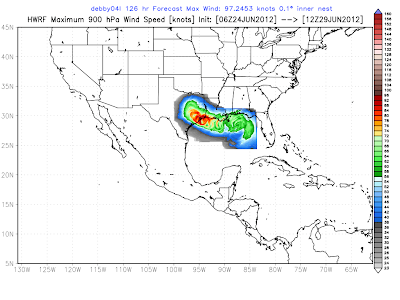 At 9 AM MDT, Tropical Storm Debby was located about 190 miles east-southeast of the mouth of the Mississippi River. Debby has sustained winds of 58 mph with gusts to 69 mph. Her central pressure is down to 994 millibars, or 29.35 inches of mercury. Debby continues to wobble off to the northeast at 6 mph. She should continue generally on a northward track before eventually turning more to the northwest and west with time.

Debby is giving the forecast models fits. For the past several days the European (ECMWF) model was steadily marching Debby westward, with a landfall along the central Texas Gulf Coast by around the middle of next week. It then brought her remnant moisture northwestward into southwest Texas, and southeastern New Mexico by next weekend. The last few runs have been taking Debby on more of a northward track. Last nights 00Z/6 PM MDT run brings her inland near New Orleans by the middle of next week.The Canadian model (CMC) had been forecasting a similar track as the European.

Meanwhile the US GFS model has persistently been insisting that Debby would take a turn to the northeast, and move across Florida and eventually up the Eastern US Seaboard. This mornings 12Z/6 AM MDT WRF-NMM run supports more of a northeastward movement with time.

This mornings official NHC forecast slowly develops Debby into a minimal Hurricane by around Wednesday, then moves her northwestward into the New Orleans area by around next Thursday. There still remains a great deal of uncertainty concerning Debby's eventual track and speed. Anyone living along the US Gulf of Mexico Coastline should continue to monitor the situation. Debby could very well change her course with time.