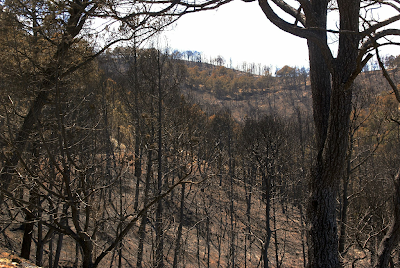 Project could have lessened fire damage.

0 COMMENTS
Summary: Rehabilitation efforts, which include reseeding waterbars and dozerlines were initiated in the burn area today. The fire perimeter remained quiet today with low to moderate fire behavior in the Aspen and Bear Canyon areas. A portion of the fire received a small amount of rain yesterday that helped suppression resources with interior hotspots. Flooding is still a possibility along areas of Bonito Creek with thunderstorms and showers predicted for the next couple of days. When in an area that has been damaged, especially near drainages, if thunder cells build, rain is falling or imminent please immediately leave the area and seek higher ground for safety. A large amount of resources are being released for other assignments; aviation resources continue to support other fires in New Mexico.
All roads accessing private land within the Little Bear Fire area are now open. Some roads accessing the Lincoln National Forest remain closed. These include NM 532 (Ski Run Road) west from the softball complex near NM 48 junction and Forest Road 107 above Bonito Dam (a permit from the Forest Service is required to access this area.)
The Truth Is Stranger Than Fiction!
My Web Page Is Best Viewed With Google Chrome.
at Wednesday, June 27, 2012