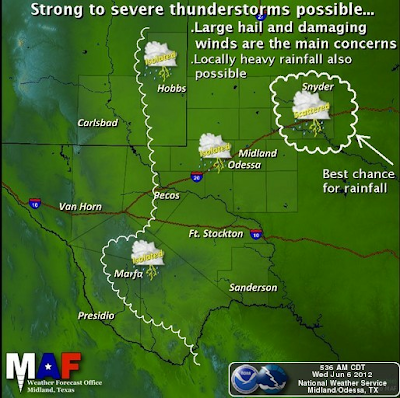 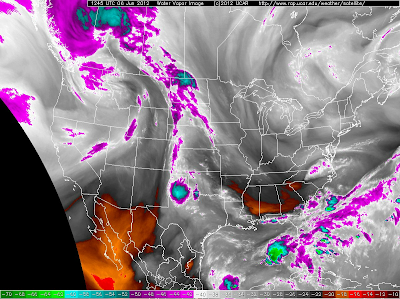 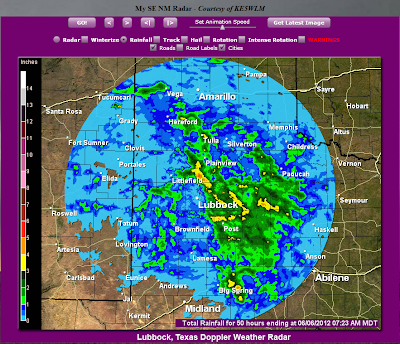 What looked like a decent setup for thunderstorms yesterday across southeastern New Mexico ended up fizzling. A complex of thunderstorms (MCS) is moving southeastward through the South Plains of west Texas this morning. This complex is depicted by the blue shaded area on the Water Vapor Satellite Image above. Widespread rainfall totals of 1" - 4" have fallen around the Lubbock area, with another 1" - 3" forecast to fall this morning. A Flood Watch remains in effect for this area.

Scattered thunderstorms will be possible today generally along and east of a Tatum-Pecos-Marfa line. A few of these storms could become severe. Training thunderstorms may produce locally heavy rainfall in the eastern Permian Basin and the western Low Rolling Plains of west Texas.

Areas of southeastern New Mexico west of the Caprock should continue to stay high and dry until the first of next week. Long-range model forecasts hint at another cold front entering the area by around the middle of next week, which if true could give us another shot at some scattered thunderstorms. Highs today will range from the mid-upper 90's. 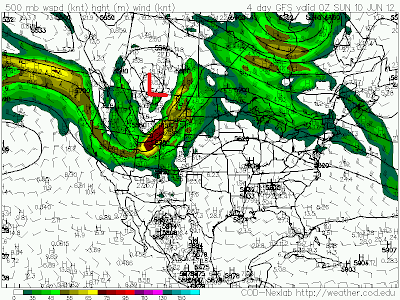 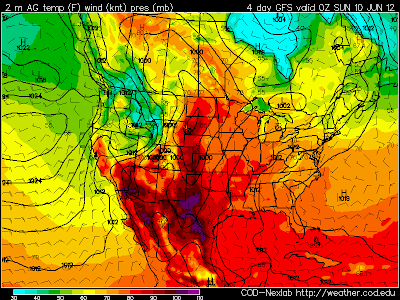 Hot weather will make a comeback by tomorrow with our afternoon high temperatures forecast to range from the upper 90's to near 100. Friday will similar readings with a few of us climbing up into the low 100's.

Saturday is looking like it is going to be very hot with near - record to record high temperatures possible over southeastern New Mexico. An upper-level trough of low pressure is forecast to swing eastward across the US and Canadian border, which will generate a surface trough of low pressure, that will extend southward from South Dakota into southeastern New Mexico.

Hot, dry donwslopping southwesterly winds will help to drive our temperatures up Saturday afternoon. This mornings Midland NWS forecast high temperature for Artesia on Saturday is 108, Carlsbad is looking at 109, and Hobbs 104. Sunday is looking just about as hot as well.

My Web Page Is Best Viewed With Google Chrome.
on June 06, 2012
Posted by Wendell Malone