Hot Today But Cooler Tue & Wed. T-Storms For Parts Of The Area. 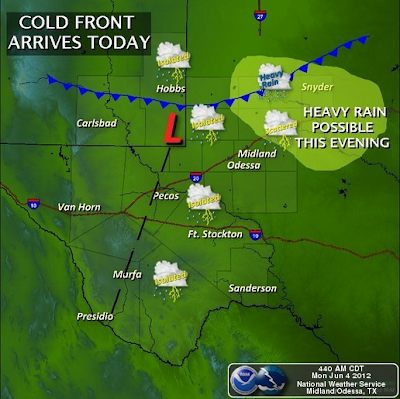 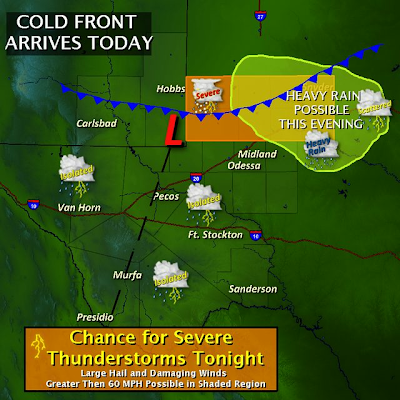 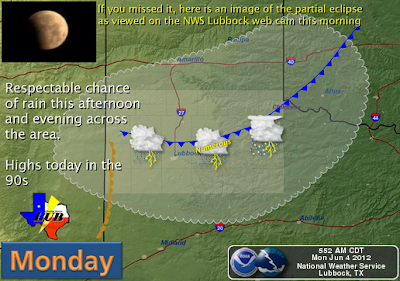 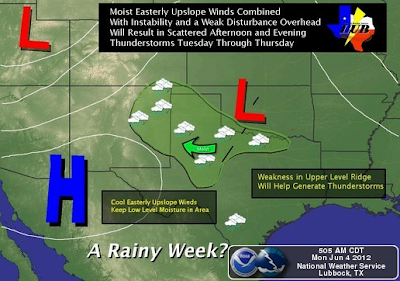 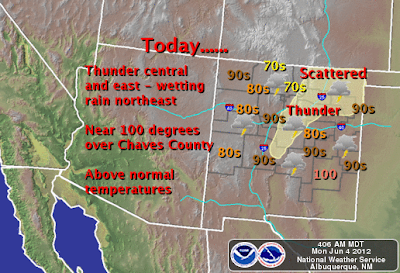 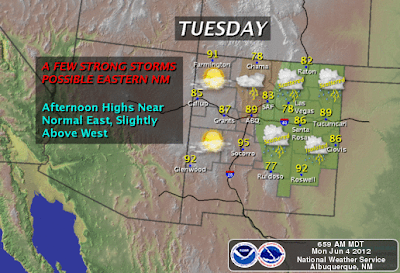 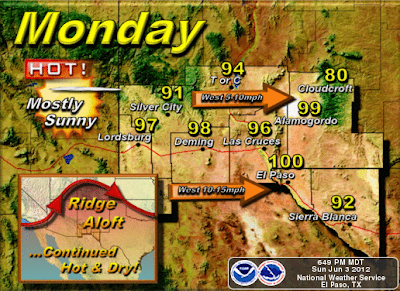 Map is Courtesy Of The El Paso NWS Office. 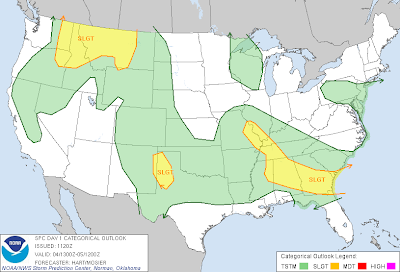 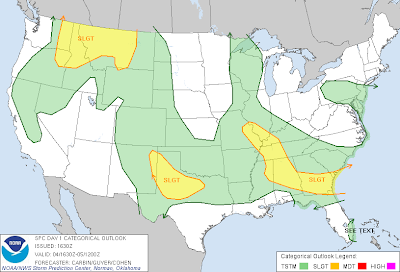 One More Hot Day Today Then Cooler Into Wednesday.

A cold front will move into southeastern New Mexico and west Texas this afternoon. Cooler air will overspread the area behind the front tonight into Wednesday. Highs are forecast to drop down to near 90 to the low 90's on Tuesday, and the low-mid 90's on Wednesday.

Before the front arrives this afternoon we can expect another hot day with our afternoon highs similar to yesterday's readings. High temperatures on Sunday ranged from 102 at the Carlsbad and Roswell Airports, 100 at the Artesia Airport, to 99 at the Hobbs Airport. The Paduca Raws located near the WIPP Site hit 105, and the 8-Mile Draw Raws located northeast of Roswell reached 103.

Scattered thunderstorms are forecast to pop up along and behind the frontal boundary this afternoon and evening. Thunderstorm coverage across southeastern New Mexico is expected to be fairly isolated west of the Pecos River.

Areas along and east of the intersection of the surface low, dryline, and cold front will have the best chances of seeing measurable rainfall. West Texas will be the most active area, where some of the thunderstorms there may become severe. Although I would not completely rule out the possibility of a few severe thunderstorms in Lea County either.

A weak upper-level low is forecast to drift westward across northern Texas Tuesday into Thursday. This feature combined with a cooler more moist airmass that will be in place is forecast to enhance thunderstorm chances across parts of west Texas and eastern New Mexico. Its unclear this morning if this setup is going to increase our chances of seeing rain in southeastern New Mexico. At any rate by the end of the week an upper-level ridge of high pressure is forecast to strengthen over the area, so a return to hot temperatures and dry weather is anticipated.

June can be a really interesting month for us weather-wise. It can either be a really hot month with days on end with temperatures at or above 100-degrees, or it can be a stormy and wet month. June can be a very active month for severe weather in southeastern New Mexico. In fact most of our tornadoes historically have occurred in June in New Mexico.

Temperature Records Are Courtesy Of-